After the lockdown: how a degree of normality could return to UK working life

The government is coming under increasing pressure to outline its strategy for bringing different sectors of the economy out of the coronavirus lockdown.

Economists have suggested a “traffic light” system to enable staggered reopenings, moving from red to amber to green as business resumes in certain sectors. Austria has embraced a step-by-step approach and small shops and DIY and gardening centres have been allowed to reopen after almost a month. Larger stores, hotels and restaurants are expected to follow in mid-May.

When restrictions are relaxed in the UK, normal life will not return, and the government is expected to introduce new guidelines for an indeterminate period of time.

The majority of companies will have to implement physical distancing, keeping workers and customers more than two metres apart from each other. Wearing face masks in certain indoor workplaces may also be compulsory. Here are some of the changes various industries are preparing to put in place.

The mayor of London, Sadiq Khan, and other regional mayors are calling for passengers on public transport to be compelled to wear face masks, as in other cities, including New York. Transport for London has introduced boarding on buses via the middle doors only in order to protect drivers.

Companies may ask their employees to begin and end work at different times to avoid putting the transport network under pressure during rush hour, or to alternate days working at home.

Airlines are also grappling with the notion of physical distancing on planes. EasyJet said this week it may leave the middle seat on its planes empty when travel restrictions are lifted. The carrier’s chief executive, Johan Lundgren, said it is also considering measures such as disinfecting its aircraft. 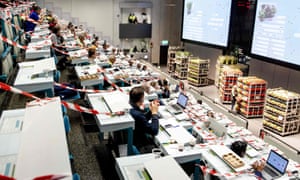 When companies reopen their workspaces, managing movement in offices will be key. In open-plan spaces, workers will need to sit further apart at rows of desks, while one report this week claimed office workers could be required to wear masks and gloves.

Supermarkets, grocers and other essential retailers that have remained open during the lockdown introduced safety measures to keep shoppers and staff apart, including plastic screens at checkouts, limiting the number of shoppers allowed inside, and floor markings to keep shoppers apart.

As restrictions are lifted, similar measures are expected to be introduced in other high street stores.

Tell us: how have you been affected by the coronavirus?

Three takeaway food chains, Burger King, KFC and Pret a Manger, have reopened a limited number of outlets for delivery or takeaway, after introducing safety measures for their employees. Burger King says it has given its staff masks and gloves and training on maintaining distance from each other.

The British Beer and Pub Association (BBPA) says pubs need at least three weeks’ notice to prepare for reopening, for breweries to increase production, and to bring back furloughed staff and clean the equipment.

Golf could be the first sport to return after the PGA Tour announced plans for four events to take place without spectators from 11 June. The following month could see the return of Formula One after Austria’s sports minister, Werner Kogler, said there would be no opposition from the government to the Austrian Grand Prix being held behind closed doors on 5 July.

The US open tennis tournament could return in August, a final decision on which is expected by June, and cycling may also come back, with the Grand Départ of a later-than-planned Tour de France scheduled for 29 August.

In football, Germany’s top division, the Bundesliga, could resume behind closed doors as early as May after players there returned to training a fortnight ago, but most other leagues remain suspended indefinitely.