Stocks still have a ways to go even as the S&P 500 hit record highs on Tuesday, according to Bank of America.

In a technical analyst research note published on Tuesday, BofA argued that the “backdrop remains bullish” for stocks, given the recent golden cross in the S&P 500 and expanding sector leadership in the market.

In July, the S&P 500’s 50-day moving average crossed above its 200-day moving average, which is known as a “golden cross.” The signal is widely followed by technical analysts and is considered to be bullish. The same signal just flashed in the Dow Jones industrial average earlier this month.

Additionally, technology stocks are no longer the only stocks leading the market higher, as it begins to benefit from expanding leadership in other sectors like industrials, energy, and consumer discretionary, according to BofA.

This bullish backdrop, supplemented by near-zero interest rates and improving financial conditions, “supports the case for [the S&P 500 to hit] 3600s to 3800s into mid 2021,” BofA said.

But investors don’t seem to be buying it. According to sentiment indicators like the AAII Bulls & Bears reading, the bears have outweighed the bulls in recent months, signaling that “investors have continued to fight the Fed,” according to BofA.

While the technical signals point to more upside for the stock market going into 2021, there could be some volatility on the horizon.

According to the note, the stock market is about the enter the worst-performing month on a seasonal basis. “August starts the most bearish 3-month period of the year,” BofA said, pointing to seasonality data on the S&P 500 dating back to 1928.

Specifically, September is the month investors need to watch out for, as it is the only month of the year that sees a positive return in stocks less than 50% of the time dating back to 1928.

Read more: Michael Venuto’s firm provides unique ETFs that have returned as much as 60% for investors this year. He breaks down his process – and shares the ‘anomaly’ investors need to watch today. 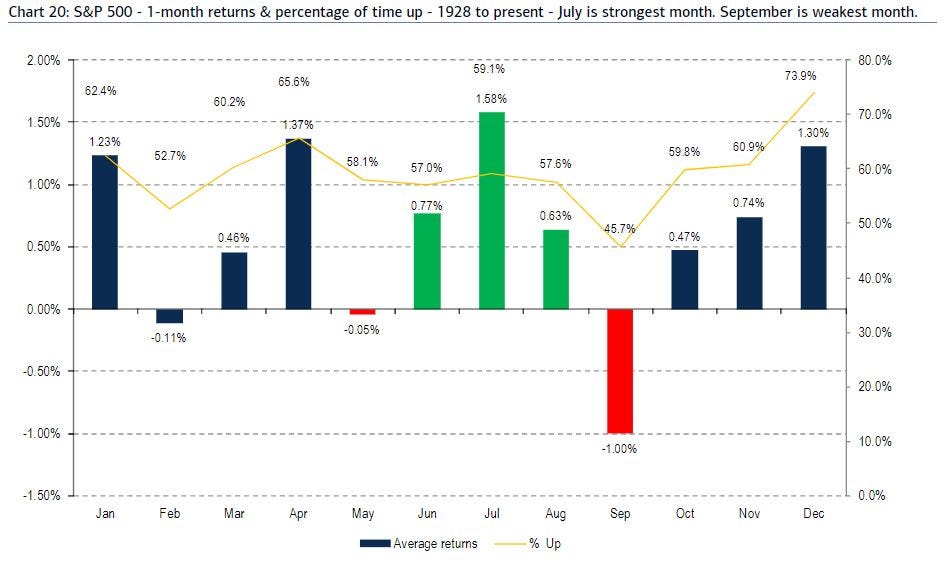