Congressional Democrats and President Joe Biden are betting there’s a bigger hole in the US economy than some government models suggest.

The main conflict around Biden’s $1.9 trillion stimulus plan has to do with a fairly simple concept: the output gap. That gauge measures the difference between actual output and the maximum potential output generated by an economy. During a recession, it’s a popular metric for judging how much more an economy can rebound before overheating.

Positive output gaps — in which actual GDP exceeds the estimated maximum — tend to fuel inflation due to strong demand for goods and services. Conversely, a negative output gap drags inflation even further below the Federal Reserve’s target. Weak inflation can be a sign of slowing economic growth and stifled wage improvement.

Lawmakers largely agree more stimulus is necessary to fill the hole in the economy created by the pandemic. But debate over a new relief bill places fresh focus on the output gap and its true size.

Democrats have repeatedly warned that passing too little stimulus would fail to close the gap and, in turn, leave the US economy languishing in a weakened state. Lawmakers should “go big” on stimulus and stray from passing an inadequate deal, Biden said in private comments to lawmakers earlier in February, the AP reported.

Republicans and even some moderate Democrats countered with arguments that overfilling the hole with stimulus could drive outsize inflation.

Two major left-leaning economists further fueled the debate: Larry Summers, director of the National Economic Council under President Barack Obama, wrote in a recent Washington Post column that Biden’s plan handily exceeds the amount of support needed for a full recovery. Olivier Blanchard, former chief economist at the International Monetary Fund, backed Summers’ thesis, tweeting the $1.9 trillion plan could accelerate growth so much “as to be counterproductive,” later defending his concerns in an article for the Petersen Institute, a nonpartisan think tank.

But what if the Summers and Blanchard camp is wrong about the output gap? Biden’s team is betting they are.

The debate is putting the White House at odds with the government’s official budgetkeeper, the Congressional Budget Office (CBO). Wall Street is emerging in Biden’s corner.

The CBO currently sees real GDP exceeding projected output by a wide margin, according to an economic outlook report published earlier this month. The output gap is already expected to quickly rise and turn positive in 2025, all without additional stimulus.

Yet some experts wonder whether the model is dependable. The CBO tends to underestimate the output gap and, in turn, provide an incorrect reading of slack in the economy, Goldman Sachs economists led by Jan Hatzius said Wednesday.

Following the financial crisis, the office repeatedly revised potential GDP estimates lower as actual output lagged its full capability. Revisions then turned positive in 2018 and 2019, once actual output exceeded its estimated potential. The model interpreted what first looked like an overheating as a catch-up, suggesting the forecasts are biased by real GDP readings, Goldman said. 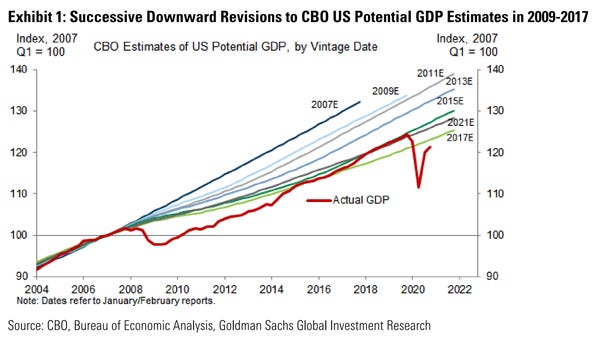 “It is hard to square these revisions with the consistent inflation shortfalls since 2008,” the economists added.

Using its own model tracking pre-pandemic 25-54 male employment, Goldman estimates the US output gap is more than twice the size projected by the CBO. The finding signals a sustained leap in inflation is unlikely and opens the door for a large-scale relief package.

Other firms have echoed Goldman’s commentary. Remaining stimulus from the December package will likely have a smaller impact on output than past measures, UBS economists led by Alan Detmeister said in a Wednesday note. Passage of Democrats’ $1.9 trillion proposal poses an upside risk, the bank added, but it said such relief would only drive modestly higher inflation than that seen without another stimulus bill.

“The current level of the economy is already dependent on considerable fiscal stimulus, and will be until vaccines are widely distributed and the economy can fully reopen,” UBS said.

Stronger-than-expected growth through the second half of the year should lift inflation expectations, Deutsche Bank economist Justin Weidner said Wednesday, while adding that the bank still doesn’t expect an uptick large enough to spark anxiety in Washington.

For decades, lawmakers have pursued stimulus packages that focused less on supercharging growth and more on keeping inflation in check.  Fiscal conservatives have warned that blockbuster stimulus would worsen the country’s debt burden and overheat the economy. Politicians mostly capitulated to such fears, concerned runaway inflation could transform a recession into a full-on collapse.

When President Obama worked to pass a stimulus bill in 2009, such worries forced the White House to trim down its proposal. Progressive economists argue the relief package passed during the financial crisis lacked sufficient aid for state and local governments, resulting in a weak recovery that delayed a full rebound for years.

The coronavirus has so far forced a shakeup in Washington’s economic-recovery playbook. The $2.2 trillion CARES Act passed in March was more than twice the size of Obama’s package passed roughly a decade earlier. President Donald Trump approved an additional $900 billion in relief at the end of last year. Wary of making the same mistake they made in 2009, Democrats are casting inflation fears aside in hopes of ushering a swift recovery.

“We have the tools to deal with [inflation] risk if it materializes, but we face a huge economic challenge here and tremendous suffering in the country,” Treasury Secretary Janet Yellen told CNN in January. “That’s the biggest risk.”

Yellen more recently described the economic situation as “digging out of a deep hole.” With full employment currently not expected until 2024, large-scale stimulus is absolutely necessary, she told CNBC in a Thursday interview.

Fed Chair Jerome Powell made similar remarks earlier in February, while speaking with the Economic Club of New York. Reopening stands to boost spending growth as households unwind savings. Such activity could lift inflation, but any stimulus-fueled increase is likely to be “neither large nor sustained,” Powell said. 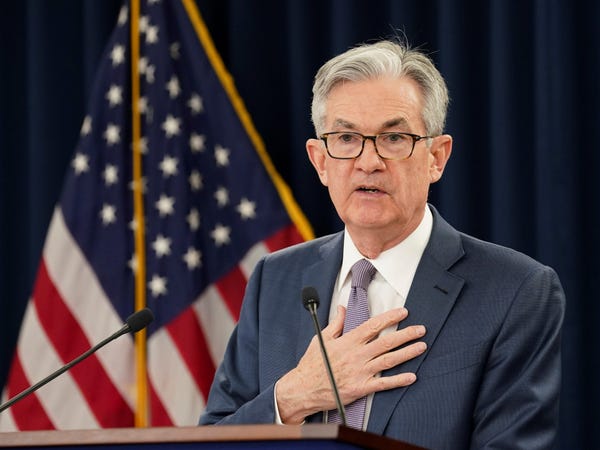 Federal Open Market Committee meeting minutes published Wednesday showed that Fed staff expect inflation to trend below 2% through 2021 and only hit the central bank’s above-2% target after 2023.

Managing inflation is only half of the Fed’s mandate — the other is maximum employment. The central bank has signaled it won’t tighten monetary conditions until it makes “substantial” progress toward both of those goals. With price growth expected to trend below the Fed’s goal for years, policymakers’ immediate focus will likely be on recouping the 10 million jobs still lost to the pandemic.

Pulling that off will likely be more difficult than the government’s numbers suggest. The Bureau of Labor Statistics’ January jobs report pegged the unemployment rate at 6.3%, down significantly from the 14.7% peak seen earlier in the pandemic.

Yet Powell expects the true rate to come in closer to 10% once data accounts for misclassification and Americans who dropped out of the labor force. Stopping short of a full labor-market recovery poses a slew of economic and public health risks, Powell said. Yellen echoed these comments in her CNBC appearance, saying the true unemployment rate was likely around 10%.

“The potential benefits of investing in our nation’s workforce are immense,” Powell said during the Economic Club’s conference. “Steady employment provides more than a regular paycheck. It also bestows a sense of purpose, improves mental health, increases lifespans, and benefits workers and their families.”