‘Black swan’ coronavirus casts its shadow over the global economy

With the coronavirus outbreak spreading far beyond its source in China, companies are braced for a hit on profits as demand slumps and production is disrupted in the world’s second largest economy and beyond.

Executives face weeks of uncertainty over how many people will catch the virus worldwide and what the full impact will be. Daniel Zhang, the boss of China’s biggest listed company, Alibaba, described the coronavirus outbreak as a potential “black swan” event that could derail the global economy.

Here are some of the main industries affected so far.

The virus has prompted 21 airlines to cancel all flights to mainland China, including Delta, United, Qantas and Air France/KLM.

According to travel data and analytics firm Cirium, more than 85,000 flights touching China have been cancelled in the three weeks since the outbreak closed Wuhan airport on 23 January, the vast majority of which were domestic.

British Airways has cancelled its daily Beijing and Shanghai services, and Virgin has suspended Shanghai flights, both until the end of March. BA will have lost 24,000 passengers scheduled to fly before the end of this month. With the suspension of flights extended through March, that number could double.

Among the big international carriers, Hong Kong-based Cathay Pacific has been hit hardest, cancelling 90% of flights to the Chinese mainland bar the biggest cities. About 30% of its network capacity has been cut, and it has asked its 27,000 employees to take unpaid leave to help it stay afloat. 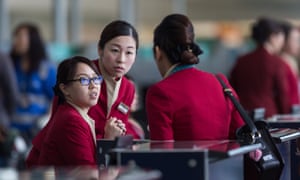 With China’s airline industry at the heart of the outbreak, its carriers have been looking to refinance, according to aviation leasing companies.
Gwyn Topham

London fashion week is in full swing but Chinese journalists and buyers are conspicuous by their absence. Their decision to stay away is a major blow to a £230bn personal luxury goods industry that has come to rely on China’s massive spending power. Chinese shoppers are the biggest buyers of designer clothing and handbags – but as they stay away from the shops, and travel restrictions curb overseas shopping sprees, the big fashion brands are starting to suffer.

Bad news is being drip-fed into the market by the luxury brands. Burberry has closed a third of its 64 Chinese stores, with reduced hours at those still open because shopper numbers have plunged 80%. The company has suspended its financial guidance for this year, saying it is too early to gauge what the impact on profits will be.

Tapestry, whose brands include Coach and Kate Spade, and Capri, the owner of Michael Kors, Versace and Jimmy Choo, have also cut their profit forecasts. Analysts at investment bank Jefferies have slashed their 2020 sales growth forecast for the industry from 5% to just 1%.

Morningstar’s equity analyst Jelena Sokolova predicts the short-term impact of coronavirus will be greater than Sars in 2002-03 because Chinese buyers now account for 35% of the spending on designer fashion, compared with just 2% nearly 20 years ago.
Zoe Wood

Data company Dun & Bradstreet say an estimated 5 million companies have Chinese suppliers – from Apple, whose supplier Foxconn postponed the reopening of its Shenzhen factory, to food companies Kraft Heinz and PepsiCo, which have closed Chinese factories.

The outbreak could barely have come at a worse time for struggling carmakers. Wuhan is a major centre of automotive manufacturing. France’s Renault and Peugeot, Germany’s Volkswagen and BMW, as well as Jaguar Land Rover, Britain’s largest carmaker, have still not reopened factories run with Chinese partners. Honda yesterday postponed the reopening of its Wuhan plant for another week, while Hyundai has shut its huge factory in Ulsan, South Korea, for lack of parts. 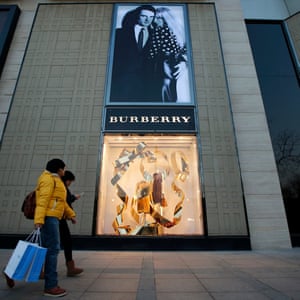 Tim Lawrence, head of manufacturing at PA Consulting, said components can take six to eight weeks to reach European factories from China. “None of them run with a lot of fat,” he said. “It takes a while to find other sources.”

JCB, one of the UK’s biggest private companies, has said it would cut back production because the virus has shut down a quarter of its suppliers in China. Fiat Chrysler warned production in Europe could be threatened within a fortnight. Nissan has already paused production lines at its Japanese plants.
Jasper Jolly

The impact on some of the big banks operating in and around China will be made clearer this week as they unveil first-half results. Analysts at Morgan Stanley expect them to be “very weak” as a result of a rapid slowdown in loan growth and a reduction in fee income.

HSBC sent home staff in Hong Kong and Singapore on Friday after an employee was placed under government quarantine. Those staff in contact have been told to observe a 14-day period of self-isolation.

Travel insurers are bracing themselves for claims as airlines continue to cancel flights to and from mainland China. Most companies will not honour claims if customers travel against government advice.
Kalyeena Makortoff

The economic slowdown has dampened commodity markets, particularly given China’s key role as the driver of demand growth. Copper prices hit four-month lows before rebounding slightly, while the price of chartering ships has fallen.

China accounted for more than three-quarters of growth in global demand for oil last year, according to the International Energy Agency, which expects demand to fall this quarter for the first time in more than a decade.

The virus has hit volatile markets, with prices for Brent crude oil futures falling to a six-week low of $53.11 per barrel on Monday. However, oil producers are contemplating cutting production, helping to buoy Brent prices back up to $57 by the end of the week – but they are still about 13% down this year.

Weakness in demand has triggered a scramble for oil storage in eastern China from traders hoping to sit out the price dip. Giant tankers capable of holding more than 2 million barrels of crude have been stranded off the Chinese coast, unable to unload at the Qingdao import terminal, according to Refinitiv data.
Jasper Jolly