On Monday, California Governor Gavin Newsom addressed the growing chorus of Californians who complain the state is headed in the wrong direction and say they’re ready to leave for good.

“I’ve lived here half a century,” said the governor, “and heard this pretty much every decade.”

“I’d just encourage folks who are leaving to consider that this state, just 6-7 months ago this state was dominating in so many sectors,” asserted Newsom. “And those core tenets of this state remain unchanged, despite some of the challenges that we face.”

“In this last decade we have been enjoying economic prosperity the likes of which few states have seen,” he contended.

“All of that remains,” he said. “The balance sheet of this state is extraordinary. It’s competitiveness is second to none.”

The net job creation claim is curious, given that the U.S. Bureau of Labor Statistics reported in mid-September 2020 that, “All 50 states and the District had jobless rate increases from a year earlier.” The bureau’s report then goes on to peg California’s unemployment rate in mid-September at 11.4%.

“I’m very long on this state,” Newsom continued. “Very confident in our ability to continue to prosper well into the future.”

As a “proof point,” the governor pointed to a Time magazine special issue from 1994, the cover of which read, “California: The Endangered Dream.” 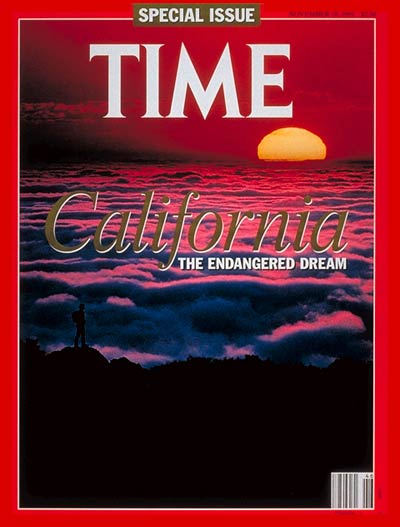 “We recovered as a state,” Newsom observed. “We worked through that. As we always do.”

The governor then cited a recent WalletHub survey that resulted in a “Happiness Index.” “California remains one of the happiest places to live,” reported the governor.

It’s true that California ranks number six on that Happiness Index. But curiously, it ranks behind less-sunny locales such as Minnesota and New Jersey.

“We’re challenged at this time,” said Newsom, before asserting that the decisions California’s residents make will determine its future.

“It’s our decisions,” said the governor, “not conditions that determine our fate and future. And I have confidence in our capacity to compete.”