According to experts, ‘Lakshmi’ and the logo ‘Godesses Lakshmi’ have a lot of value in India and are the biggest driver for the Bank. Retaining the Lakshmi name and logo will help DBS. 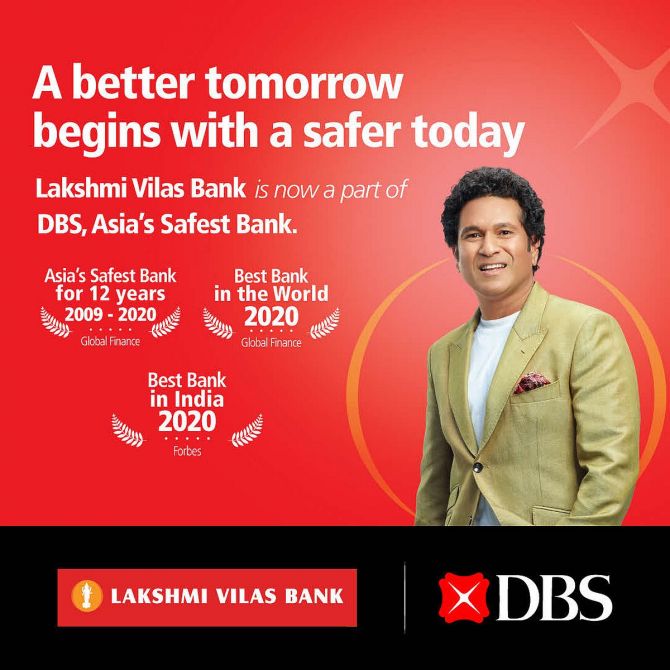 With effect from November 27, 2020, LVB has been amalgamated with DBS Bank India Ltd (DBIL), the subsidiary of DBS Bank, Singapore.

While DBS India did not comment on whether this is a permanent or a temporary arrangement, experts and LVB employees believe that the LVB name will be retained.

Sources said as per the scheme of amalgamation, the appointed date is November 27.

This means LVB ceased to exist from that date and DBS Bank India Ltd took over.

This would be a discretionary business decision of DBS.

Even in the merger of Syndicate Bank with Canara Bank, every name board carries the word Syndicate.

This is required to avoid confusion in the minds of the public.

But for how long, is a question to be decided by the management by prudence, bank officials said.

An advertisement banner featuring Sachin Tendulkar, who was roped in by DBS Bank as brand ambassador some five years ago, was also seen with the message: ‘A better tomorrow begins with a safer today. Lakshmi Vilas Bank is now part of DBS, Asia’s Safest Bank’.

Sandeep Goyal, brand expbert and founder of Mogae Group, said that the word ‘Lakshmi’ and the logo ‘Godesses Lakshmi’ have a lot of value in India and are the biggest driver for the Bank.

Retaining the Lakshmi name and logo will help DBS, especially at a time when there is a lot of debate over foreign entities.

“Usage of Lakshmi in the brand is a big positive. It is a sensible decision to keep the identity which would help in smooth transition in the long run.”

DBS said, in a communication to customers, that existing fixed deposit/s with erstwhile LVB will continue at the interest rates at which they were originally booked, till the next maturity date.

The interest rates on savings bank accounts will be governed by those offered by the erstwhile LVB till further notice and any new deposits being booked now, will be at rates earlier published by erstwhile LVB, till new rate cards are announced.

“We will be working to integrate LVB’s systems and network into DBS over the coming months.

“During this period, you will be able to access all the banking services of erstwhile LVB.

“Once this is completed, we will inform you, and you will be able to access a wider range of products and services, including access to the full suite of DBS digital banking services which have won multiple global accolades,” said DBS Bank India in a communication to the customers.

It may be noted, the scheme of amalgamation is under the special powers of the Government of India and RBI under Section 45 of the Banking Regulation Act, 1949, India.

Due to mounting pressure due to increase in NPAs and losses, the Regulator has decided to amalgamate the bank with DBS and it was stated the amalgamation will provide immediate stability to LVB and to safeguard depositors.

However, shareholders of the Bank have moved to the court against the amalgamation.