Beyond the horizon off the coast of North Yorkshire, a quiet revolution is emerging from the waves of the North Sea.

More than 80 miles from land, hundreds of the world’s most powerful wind turbines have begun reaching into the air as construction progresses on the biggest windfarm ever built. Almost 200 turbines, each almost as tall as the Eiffel tower, will soon rise above the submerged Doggerland to populate an expanse of sea as large as North Yorkshire itself.

The Dogger Bank windfarm is an engineering feat that marks a step change in the growth of renewable energy. Each steel structure, weighing 2,800 tonnes, has been designed to soar more than 250 metres from where their heels are buried in the seabed to the top of each 107-metre blade. The staggering scale of the turbines means that each one can generate enough electricity to power 16,000 homes, at less than the average price of electricity in the wholesale energy market.

This offshore windfarm, and others like it, promises to power a surge in clean electricity – which will soon be needed in vast volumes to charge cars, heat homes and produce green hydrogen gas for factories and transport. It is a central part of the government’s plan to make the UK carbon neutral by 2050, and to reimagine Britain’s global role in what will be an industrial revolution for the low-carbon age.

And it is already playing a significant role: on Boxing Day, Storm Bella ensured that more than half of Britain’s daily electricity came from wind turbines for the first time.

The construction of the Dogger Bank farm will fall to one of the UK’s few major renewable energy companies, SSE. Built on the legacy of some of Britain’s earliest renewable energy projects – its roots are in Scotland’s hydro-electricity board – SSE will construct the windfarm in three phases through the 2020s. Each phase represents a multimillion-pound investment, hundreds of jobs in the north-east of England, and enough clean electricity to power millions of homes.

Alistair Phillips-Davies, SSE’s chief executive, announced a £6bn financing deal – involving 29 banks and advisers – last month to support the cost of building the first two phases, and the third deal could be announced by this time next year.

“For SSE, and for all our staff, there’s definitely nothing that we could be more proud of at the moment than reaching financial close on what will ultimately be a £9bn project,” he said.

“It will be the world’s biggest, most innovative offshore windfarm. It will generate more energy per turn of those rotors than any other project, enough to power a house for two days. But the amazing thing is, we’re going to do more. We’re going to see more and more [offshore wind] on the back of the prime minister’s 10-point plan.”

Boris Johnson’s plan for a green industrial revolution relies heavily on offshore wind power, which he hopes to increase threefold to 40GW by 2030. This is important for two reasons. The first is the rapid expansion of the renewable energy industry to help generate enough clean electricity to displace fossil fuels in the energy system, as the UK works to create a net-zero-carbon economy by 2050. The second reason is to spur a supply-chain boom that can help to drive the UK’s green economic growth and create substantial numbers of “green-collar” jobs. 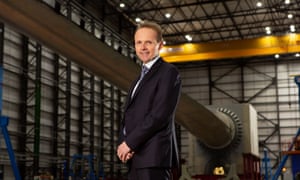 On a grey December day in Northumberland, Phillips-Davies led the prime minister on a tour of a wind turbine testing facility in Blyth – just one example of the industrial innovation mushrooming in several of Britain’s embattled coastal towns thanks to the burgeoning offshore wind boom.

The Offshore Renewable Energy (ORE) Catapult centre employs 200 people tasked with testing the equipment used to build offshore windfarms, including the world-beating turbines at Dogger Bank. In a heavily fortified state-of-the-art testing hangar, each 100-metre-long rotor blade is put through its paces to make sure that it can withstand the harsh conditions of the North Sea. This involves specially designed equipment which can “waggle” the blade through a 25-metre range, 24 hours a day, for four to six months.

“We can build world-beating, world-class wind turbines, and have them tested here,” said Phillips-Davies. “But we want to get more UK content involved in our projects. We’re hoping to encourage more supply-chain companies to come to the UK so we can increase the UK-made content in our windfarms to well beyond 60%.”

Today, blades for the Dogger Bank farm are manufactured overseas and shipped to Port of Tyne before being brought to the testing facility on giant barges along the river. Soon, though, the US industrial giant GE may begin building the huge turbine – known as the Haliade-X – at a factory in the UK, providing much-needed jobs for Britain’s struggling manufacturing sector.

The Dogger Bank windfarm, to date, has supported more than 300 jobs in the coastal communities of Hartlepool and Port of Tyne, which are set to reap economic benefits from the project. Employment is expected to climb into the thousands as construction on the second and third phases begins. SSE’s earlier offshore windfarms have also created new renewable energy centres along the east coast of Britain from Wick and Dundee in Scotland to the Norfolk coast.

Offshore windfarms built by Danish power company Ørsted and ScottishPower Renewables have supported thousands of jobs and supply-chain hubs across the east coast of the UK too. In total, the offshore wind industry expects to create 27,000 new jobs by 2030.

“A lot of these offshore facilities are in less well-known places. They’re all around the edges of the UK, in places that probably need investment and more jobs. So it’s a fantastic opportunity,” Phillips-Davies said.

“I think we’re at over 1,000 green jobs created so far, and close to £10bn-worth of projects done. So we feel like we’re in a really strong place, and I hope we can go forward strongly from here over the next decade.”