While the seizure of 23 tons of cocaine by German, Belgian and Dutch police — the largest-ever haul of the drug in the European Union — was noteworthy, it serves as merely the latest proof of how Europe has become the epicenter of the global cocaine trade.

In mid-February, German police discovered 16 tons of cocaine hidden in containers at the port of Hamburg, while their Belgian counterparts seized 7.2 tons of the drug in Antwerp soon after. Both forces acted after a tip-off from the Netherlands, where both shipments were bound.

On February 24, Dutch authorities raided two properties in and around Rotterdam and arrested the owner of an import company. “The seized mega-shipments to the Netherlands together form an absolute record. Never before has so much cocaine been intercepted at once,” Dutch police said in a statement.

The drugs in Hamburg were hidden in a container of wooden blocks, which had come from Paraguay. The ones in Antwerp were packed into over 1,700 tin cans of wall filler and had left from Panama. The Dutch authorities also announced that the company receiving these two shipments had ordered 11 containers filled with mackerel, pineapple, squid and wood from Panama, but it is not yet clear whether these also contained drugs.

“We are estimating a street sales value of between 1.5 billion euros and 3.5 billion euros (between $1.8 billion $4.2 billion) for the 16 tons [seized in Germany],” Hamburg customs official Rene Matschke told AFP.

This seizure makes up almost a quarter of the 102 tons of cocaine seized in or bound for Europe in 2020, which was already an annual record, according to UN figures cited by the BBC.

And the fact that the drugs caught in Germany had originated in Paraguay seems to confer that that country’s waterways with Bolivia are now a crucial drug transportation route on the way to ports on the Atlantic, as reported by InSight Crime earlier this year.

While this week’s haul dwarfs any previous individual operation, it comes as the latest in a rapidly escalating series of seizures.

In October 2020, 11.5 tons of cocaine were found at Antwerp in a container of scrap metal from Guyana. Other notable finds have happened regularly at Hamburg, Rotterdam and a string of smaller European ports. 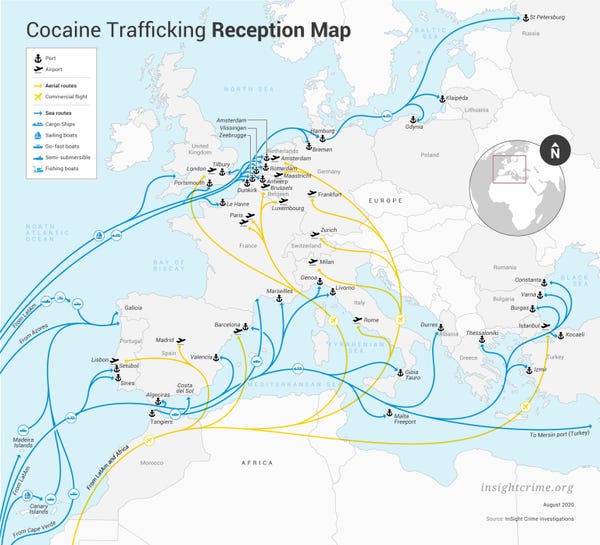 Europe is increasingly replacing the United States as the epicenter of the cocaine trade, given the sky-high prices the drug fetches there and the number of transportation options available to traffickers.

And with the increase in cocaine production in Colombia, Peru and Bolivia , as well as strong transportation links through Venezuela, Central America, Paraguay and Brazil, it may be just a matter of time before this new record is beaten.

As InSight Crime revealed in its recent investigation, “Cocaine Pipeline to Europe,” the switch to the European cocaine market is a no-brainer for Colombian drug traffickers, despite the distance and difficulty of access. 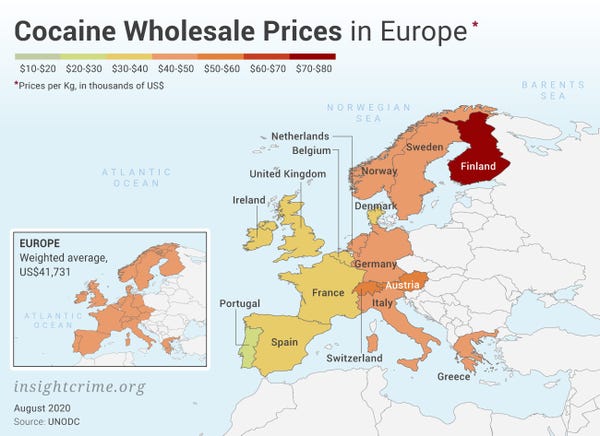 It is also unclear what could be done to slow down this tsunami. The ports of Hamburg, Rotterdam and Antwerp are getting savvier at halting the entry of cocaine but it is uncertain how much is getting through their nets. Smaller ports do not share that experience.

Bob van den Berghe, regional coordinator for the United Nations’ Container Control Programme (CCP), gave the example of the port of Zeebrugge in Belgium that has seen a recent rise in drug shipments coming from Paramaribo in Suriname.

“In 2021, there was a seizure of around 160 kilograms at the port of Paramaribo destined for Zeebrugge. Last year, they found 730 kilograms of cocaine in the roof of a container in Paramaribo, also bound for Zeebrugge. There were other seizures in 2018 and 2019,” he said.

“We don’t necessarily consider Zeebrugge a risky port yet but Belgian authorities are more focused on this port,” explained van den Berghe.

Similarly, while initiatives such as the UN’s Container Control Programme are training port authorities in Latin America how to detect suspicious containers, new exit points are regularly being tested.

In December, the United Nations Office on Drugs and Crime (UNODC) reported that canals connecting Bolivia’s eastern border to the Paraguay River in Brazil were now important for the Atlantic drug route.

“It’s incredible to find those numbers in Paraguay. In October 2020, 3.5 tons of cocaine were seized in Paraguay, having come from Bolivia and on their way to Antwerp,” said van den Berghe, adding that the CCP has helped to create port control units (PCUs) and training schemes in most major ports in Latin America, the Caribbean and Europe.

“It exposes the airspace between Bolivia and Paraguay, as well as the waterways and the Paraná River, as important routes to the Atlantic. The CCP would like to establish a PCU at inland ports along and near the Paraná and Paraguay rivers, such as Puerto Busch,” van den Berghe told InSight Crime. 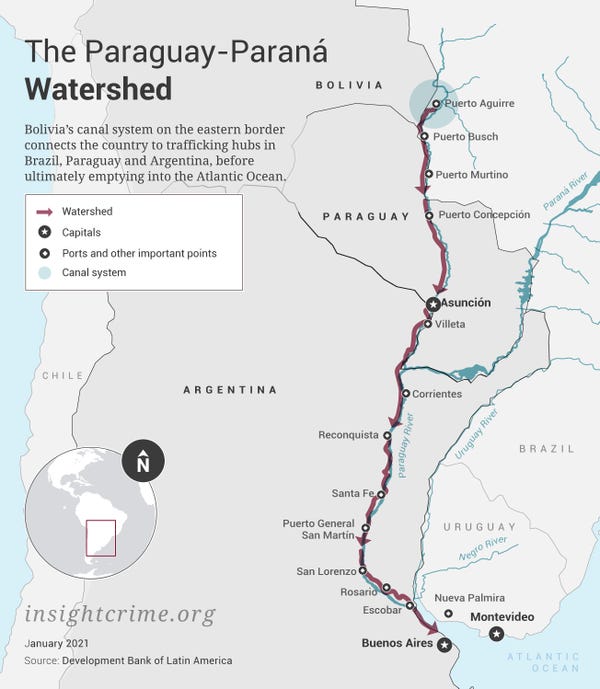