Top brass, including Solomon, have descended from their plush offices on the 41st floor to a grid of cubicles on the 12th floor. It’s part of a plan first announced in December 2019, though the pandemic lockdown meant the move didn’t actually happen until this summer.

In an internal memo announcing the move, Solomon said he wanted executives to be nearer to The Sky Lobby, which is on the 11th floor of Goldman’s 44-story, $2.1 billion glass tower. The lobby is full of couches and coffee for that all-important buzzword of business: collaboration. Indeed, the bank posted a picture on social media in June that showed employees and interns hanging about in the space, which also has a cafeteria and gym.

GOLDMAN CUTS FORECAST FOR US ECONOMIC GROWTH IN 2021 AND 2022

"The Sky Lobby was specifically designed to be the hub of this office," Solomon wrote of the space at 200 West St. in downtown Manhattan. "There is a natural ‘buzz’ there, and I want our leadership team to be part of it."

With execs just one floor away — accessed by spiral staircase — the idea was they’d be more "accessible" to everyday employees, a person close to the bank told The Post. 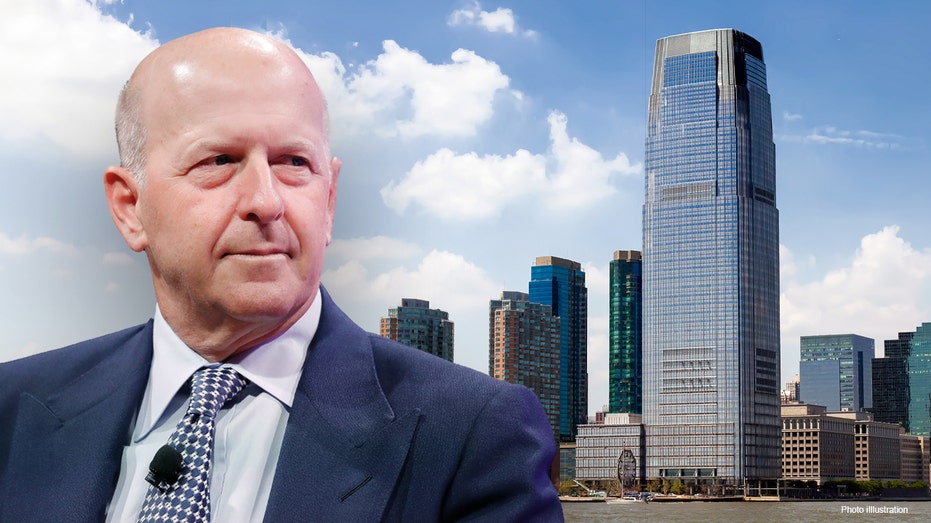 Goldman Sachs President and Co-COO David Solomon is seen in a photo illustration along with a company building in Jersey City, New Jersey, across from New York City. (Getty Images)

"You didn’t find a lot of enthusiastic support for the idea," the person said.

And Solomon isn’t exactly milling about, chatting with the hoi polloi. "David is travelling all the time and everyone else is stuck there on 12," the person said of the execs’ new floor. "Ninety percent of the time, he is away from his desk," another person added.

The bigwigs on 12 have partitions to separate their spaces and they each have a conference room for meetings.

In a statement to The Post, Goldman spokeswoman Andrea Williams said, "The new space on 12 is modern and open, joining us with other innovative companies in designing a flexible floor plan that invites and engages."

"Some may quibble about the color of the comfy green chairs – but our employees and executives overwhelmingly agree it’s a great space to meet, catch up and grab a coffee with colleagues," she said.

The space cost north of $10 million to build out, according to people with knowledge of the matter.

While one source applauded the move as a "good impulse to be closer to people," the reality is executives are just as distant as they were before. "The 12th floor is up a spiral staircase, so you have to go upstairs to see anyone … no one is just going to wander by," a source told The Post.

And some executives are mourning their Hudson River views and cushy offices. "Most people have just ended up working from their conference rooms," another person said.