Manhattan real estate is back and it is booming. In 2021, prices were near record highs and sales were higher than they’d been in more than three decades.

The Big Apple was hit hard at the beginning of the pandemic. Prices dropped and sales activity slowed. But Manhattan came back strong in 2021, with the most sales of co-ops and condos in 32 years, almost double that of 2020, according to a report from brokerage firm Douglas Elliman and appraiser Miller Samuel. 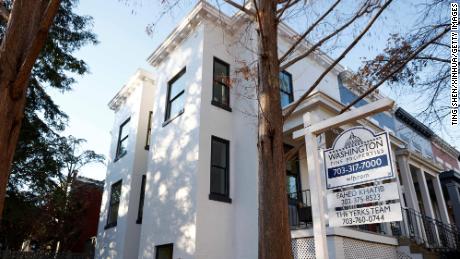 The strong performance is a sign people are feeling better about living in the city, according to Jonathan Miller, president and CEO of Miller Samuel.

“2021 began with vaccine adoption rates being high, that sent a signal that it was safe to be in the city and sales took off,” said Miller.

He noted that the city’s housing market is about six to nine months behind what has happened in the suburbs. “The city is now doing what the suburbs did ahead of it, which is boom,” Miller said.
But unlike markets across the country which have record low inventory, Manhattan’s inventory, is consistent with historical norms, with a 5.3 months’ supply of homes.
Miller does not expect that level of supply to last, however. The high sales activity in Manhattan is being fueled by buyers racing against the clock to lock in a low mortgage rate before they rise further, he said.
“2021 set a lot of sales records and yet office towers are still two-thirds empty,” he said. “The market is expected to tighten up and that’s before we see more office workers returning. 2022 is going to be a year of heavy sales volume, a higher share of bidding wars, a sharp decline in listing inventory and higher prices.”

Bidding wars are making a comeback

The days of the “Covid discounts” and “pandemic pricing” in Manhattan are long gone, said Miller.
Manhattan saw a more modest price increase last year than red-hot housing markets like Austin or Boise, where median year-over-year prices were up 40% and 30%, respectively, according to Zillow.
Prices in Manhattan had been drifting lower or not seeing much appreciation from 2017 to 2020, according to the report. Heading into the pandemic, the upper end of the market had become soft.
“Then we have this unexpected boom after a frozen market,” he said. “And now the upper end [of the market] is way ahead of pre-pandmeic.”

Over the past decade, sales of larger and pricier apartments — those with four bedrooms or more — rose at twice the rate or higher of any other size apartment, according to the report.
“The driver for this was that the greater the income, the greater the mobility, and there was a lot more movement in the upper end of the market because those buyers and sellers are more mobile than lower wage earners, for whom the economic impact of the pandemic was far more punishing,” said Miller.
And competition, as measured by bidding wars, is ramping up, said Miller.
“There is an intensity in the Manhattan market, but it isn’t at the levels we’ve seen in the suburbs,” said Miller.

The number of bidding wars in Manhattan had exceeded 9% by the end of the year, according to Miller.
“A typical amount is 5% to 7% of transactions have bidding wars. The high was 31% in 2015,” he said. “Bidding wars are rising slowly around New York. Heavy sales volume is expected and inventory will not be able to keep up. That will press prices higher this year.”
Source: Read Full Article