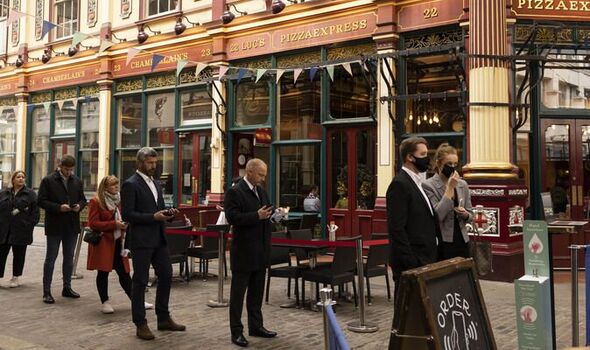 The Treasury announced funding in December to provide a lifeline for businesses in England suffering from mass cancellations and declining footfall over the Christmas period when the Omicron variant was spreading. Local authorities were entrusted to deliver the one-off grants, worth up to £6,000, for leisure, hospitality, and accommodation businesses.

Yet just £305million, distributed to 309 English councils, had been paid out less than three weeks before the final cut off for applications on March 18, Altus Group’s analysis of official Government data shows.

Some 29 councils had failed to distribute a single penny of the allocated grant funding to struggling firms, according to the figures.

Carlisle City Council and East Herts District Council had both paid out less than £1 for every £10 of the funding they received.

However, some areas benefited more than others with seven councils paying out more in grants than they received from the Government.

The London Borough of Barnet paid out just under £2.5million by late February, almost 40 percent more than it was allocated.

Councils needed to make all grant payments to eligible firms by March 31 after which payouts would not be reimbursed by the Treasury.

Robert Hayton, UK president of Altus Group, said: “These types of businesses saw one of their most valuable trading periods wiped out and simply didn’t get the support they needed quickly enough. I just hope councils rallied at the end.”

This analysis came as business rates climbed on April 1, as the Government tapered off its pandemic financial support measures. Firms across the UK will face a £7.1billion increase in rates for the year.

VAT levels have also returned to 20 percent across the hospitality sector after dropping to 5 percent during the pandemic – a move likely to push up prices significantly for customers.