Manatees are dying in Florida, and the US wants to know why

Florida manatees are dying at a record pace, prompting a federal investigation and calls to relist the aquatic mammals as endangered.

So far this year, 800 manatees have died in Florida, more than double the average for the same period over the past five years, according to state data. Their estimated population numbered 5,733 in 2019, the most recent year in which wildlife officials conducted a count. The U.S. Fish and Wildlife Service declared an "unusual mortality event," defined as one that is unexpected, involves a significant die-off and demands an immediate response.

At the heart of the problem is deteriorating water quality that has depleted the seagrasses that manatees eat, researchers say. It highlights a broader threat to other marine species, they say, and to Florida’s economy, which relies heavily on visitors drawn to the state’s coastline.

Manatees, which typically measure about 10 feet in length and weigh more than 1,000 pounds, have faced numerous perils in recent years, including collisions with watercraft and exposure to red tide, a harmful algal bloom. Now, researchers say, they are experiencing starvation.

U.S. Rep. Vern Buchanan, a Republican whose district near Tampa Bay includes Manatee County, called last week for the Fish and Wildlife Service to upgrade the mammal to endangered from threatened. That would reverse the agency’s 2017 decision to downgrade the manatee to threatened—a move he and numerous environmental groups criticized as premature at the time.

"There’s enormous stress on the manatees right now," Mr. Buchanan said. "If we can get the endangered designation back, we can get more funding for manatees and water quality in general."

The Fish and Wildlife Service is conducting an assessment of the manatees that is expected to be completed in 2022 and will inform the next review of the animals’ status, an agency spokesman said. An endangered species is one deemed at risk of extinction.

Especially hard hit is the Indian River Lagoon, an estuary spanning 156 miles of Florida’s eastern coast that draws many manatees and is home to commercial and recreational fisheries. More than half the manatee deaths this year occurred in the five counties the lagoon borders, state data shows. The seagrass footprint in the lagoon has declined 58% since 2009, according to Charles Jacoby, supervising environmental scientist at the St. Johns River Water Management District, which covers the northern part of the lagoon. 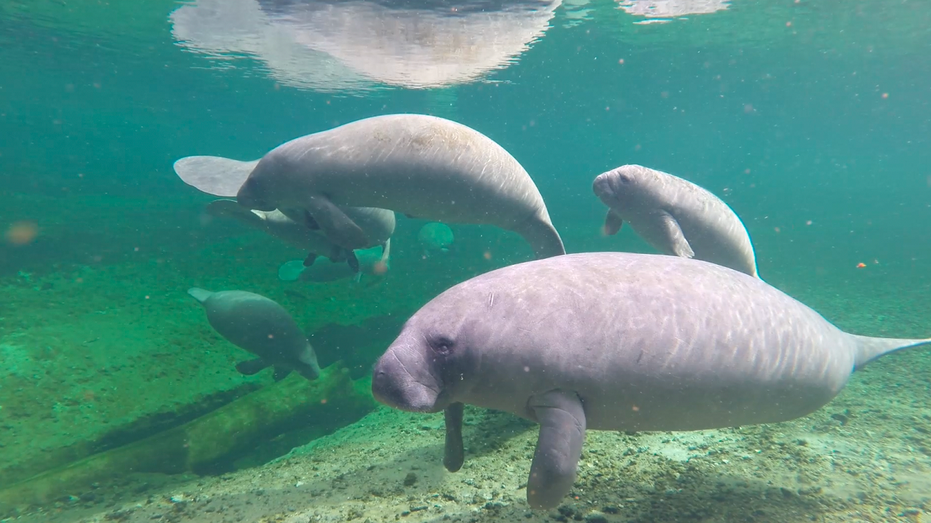 Underwater photograph of manatees taken near Blue Springs State Park in Florida (photo courtesy of the Save the Manatee Club).

In recent years, algal blooms have broken out in many Florida waterways, fueled by nutrients such as nitrogen and phosphorus coming from improperly treated sewage, leaking septic tanks and fertilizer used for lawns and agriculture, researchers say. The blooms block sunlight that seagrasses need to grow.

During a recent boat outing in the lagoon, fishing guide Paul Fafeita said, a pristine area once full of seagrass and marine life was barren. "We didn’t see anything," he said. "It’s a void of nature."

Mr. Fafeita said he worries about not only the ecological impact, but the economic one, given the area’s dependence on fisheries and tourism, including fishing charters and sightseeing trips. An organization he heads, the Clean Water Coalition of Indian River County, joined other groups earlier this month to urge Florida Gov. Ron DeSantis to declare a state of emergency for the lagoon.

The Republican governor’s office didn’t respond to a request for comment. Last month, he said declaring a state of emergency is unnecessary and would scare people.

Examinations of dead manatees this year showed that many had characteristics including empty guts, atrophied internal organs and body weights as much as 40% below normal, said Martine de Wit, a manatee veterinarian at the Florida Fish and Wildlife Conservation Commission. Those found ailing but still alive were sometimes lethargic or had trouble staying upright, she said.

Though hunger-related deaths have subsided as warmer weather allows the sea cows to disperse in search of food elsewhere, researchers worry about what awaits the animals next winter.

A coalition of organizations is now working on securing additional holding facilities where ailing manatees can be fed and cared for, said Patrick Rose, executive director of the Save the Manatee Club. "I’m pushing really hard that there be a contingency plan to rescue, if need be, hundreds of manatees," he said.

Click here to read more of The Wall Street Journal.