Despite calling Nikola “a story-stock,” JPMorgan upgraded shares of the company on Wednesday to overweight after they fell 57% from their record-high to below JPMorgan’s $45 price target.

The bank said the stock is largely being driven by short-term traders, adding that “inbound calls from institutional investors have been more focused on the warrants.”

JPMorgan expects Nikola to remain volatile, and said it could even fall further as SPAC shares are registered and the company exercises warrant calls, “which could lead to some additional selling,” according to the note.

The bank sees three upcoming catalysts ahead for the start-up EV truck maker:

1. The “announcement of an OEM partner for the Badger truck.”

2. “An H2 (hydrogen) station deployment plan for the UK.”

3. “Potentially accelerated implementation plans for the FCEL truck in the US California’s CARB ACT ruling could lead to accelerated adoption of H2 infrastructure on the West Coast.”

JPMorgan added that it expects the stock to react positively to any developments that shorten or de-risk Nikola’s battery and hydrogen-fueled truck implementation plans.

Nikola has ridden a wave of investor hype surrounding electric-vehicle makers since going public last month. The fanfare has in part been driven by the success of Tesla, whose stock skyrocketed past $1,000 and then went on to new all-time highs on its strong second quarter delivery data.

That spilled over to Nikola, which began accepting a $5,000 reservation for its Badger electric pickup truck last month. The buzz was so strong that Nikola shares doubled in a single day after the company went public via a reverse merger in early June.

Despite Nikola’s 28% surge on Wednesday, shares are still down 23% since the start of July.

Read More: The most accurate analyst covering companies like Amazon says these 7 stocks are great bets for the future of e-commerce – even as the coronavirus bump fades 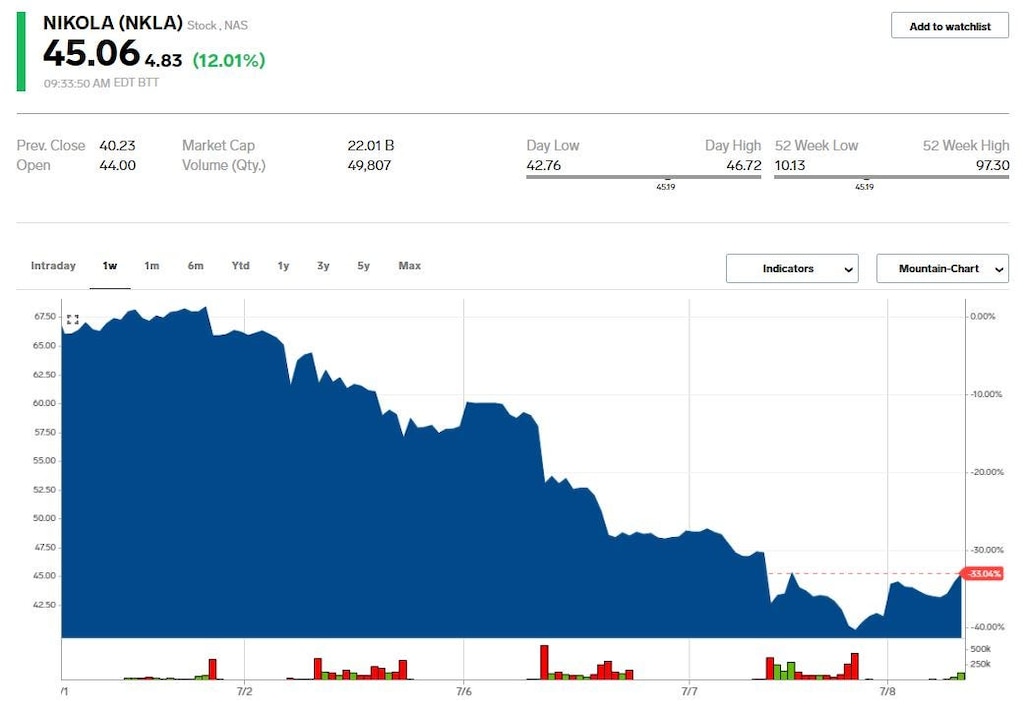