Nio extends its 2020 rally to more than 1,100% as electric vehicle competition heats up 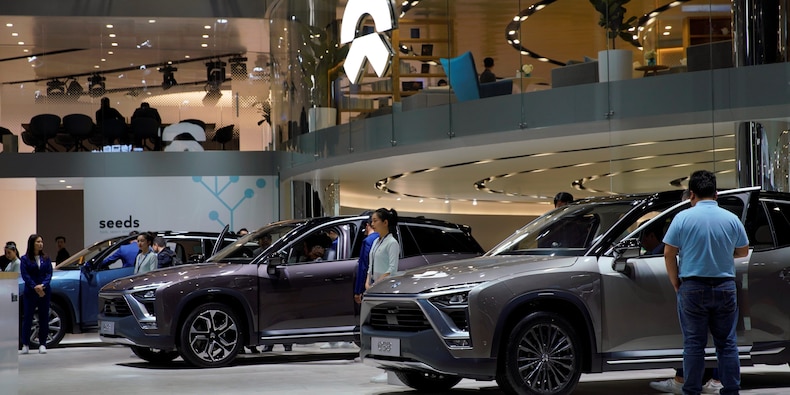 2020 has been a strong year for electric vehicle start-ups. From high-profile SPAC debuts to soaring stock prices, investors have pegged an outsized premium to EV stocks as they try to replicate the success of Tesla.

One EV company that has seen an outsized gain this year as it ramps up the production of its vehicle lineup is China-based Nio. The company, which has its eyes set on the premium electric vehicle space in China, has seen its stock rally by more than 1,100% year-to-date as of Thursday’s close.

That rally is set continue on Friday, when the rally could hit 1,200%, with Nio’s surging more than 5% in Friday morning trades.

Earlier this month, Nio saw its market value soar past General Motors after it revealed record monthly deliveries in October of more than 5,000. The company said it has cumulatively sold more than 60,000 cars since it debuted its current model lineup in 2018.

Now, with a market capitalization of nearly $70 billion, Nio is behind just a few automakers who are bigger in market value, including Volkswagen, Toyota, and Tesla. But whether Nio can hold onto and extend its gains set in 2020 will most likely hinge on execution as it attempts to grow into its valuation.

This is true for many high profile electric vehicle companies, and was true for Tesla, which faced years of skepticism from investors as it frantically worked to ramp up production to meet soaring demand for its ever expanding EV model lineup.

On the flipside, EV startup Nikola Corp. is a reminder to investors that fortunes could quickly dwindle with any hiccups that materialize in the growth narrative of the company. The company faced waves of controversy following a short report from Hindenburg Research in September that alleged the company and its founder Trevor Milton misled and deceived investors.

Nikola, though it denied a bulk of the claims made by Hindenburg, has yet to fully recover from the short-report, which has put its own business opportunities at risk, such as a potential partnership deal with General Motors. Talks surrounding that deal are ongoing, according to both Nikola and General Motors, with a deadline to make a deal set for December 3.

One relatively under the radar China-based EV maker investors may shift attention to is Xpeng, which soared 33% on Thursday after it reported strong growth in its third quarter results.

Other high-profile electric vehicle startups that investors will likely keep an eye on going forward include Fisker, Lordstown Motors, and Rivian, which remains private.

Related posts:
Hot News
Global Temperatures Already 1.2ºC Above Pre-Industrial Levels
Indian economy to see positive growth in fourth quarter of current fiscal: Niti Aayog VC
COVID-19 Hospitalizations And Deaths In US Reach All-time High
Arm CEO expects regulators to ‘take a good look’ at the Nvidia deal
Pfizer, BioNTech’s COVID-19 Vaccine Gets UK’s Emergency Authorization
TRANSFORMING USER EXPERIENCE IN BANKING: Here are the strategies winning financial institutions are using to deliver a superior user experience
Trump dismisses DOJ's probe of bribery-for-pardon allegation: 'Fake News!'
Recent Posts
This website uses cookies to improve your user experience and to provide you with advertisements that are relevant to your interests. By continuing to browse the site you are agreeing to our use of cookies.Ok