Photos show a plague of mice swarming New South Wales, Australia, where they're eating up farmers' crops, home appliances, and even each other

Large parts of the state in New South Wales, Australia, are plagued by a swarm of mice that farmers say have been destroying home appliances, spoiling farmers’ crops, and even eating each other.

The state government called the plague “absolutely unprecedented” and warned that it could cause huge economic damage, the Associated Press reported Friday. 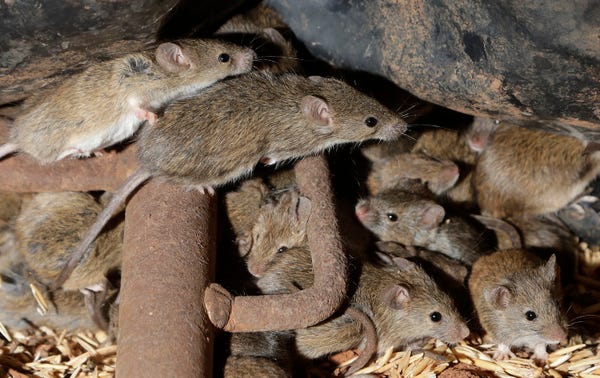 There is a risk that the mice will eat up farmers’ wheat, barley, and canola before it can be harvested, the AP said.

The NSW Farmers Association, a top agricultural group in the state, estimated that the plague could cost farmers a total of 1 billion Australian dollars ($771,000) during the winter crop season, the AP reported. The Southern Hemisphere winter lasts from June to August.

Xavier Martin, the vice president of NSW Farmers, described to ITV News on Wednesday an “explosion in mouse numbers” and said they were eating up crops, and destroying home appliances and telecommunication networks.

“Look, even in this house here they ate the hose at the back of the dishwasher, so when the dishwasher ran, it flooded the kitchen.” 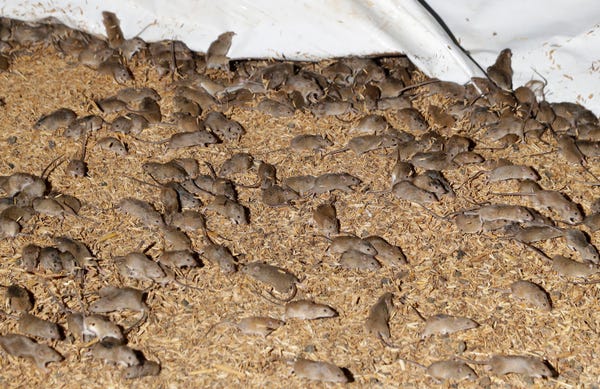 Martin said the mice also “shut down” several telecommunication towers across the southern part of the state, making it hard for people to contact authorities for help.

One family home in Gwabegar, northeastern New South Wales, even burned down after mice chewed through their electrical wires, 9News reported. The state’s fire service is investigating whether the destroyed electrical wires caused the fire.

People also described the mice getting into their homes and clothes.

Another farmer in central New South Wales, Jason Conn, told the AP: “They’re in the roof cavity of your house. If your house is not well sealed, they’re in bed with you. People are getting bitten in bed.”

“It doesn’t relent, that’s for sure.” 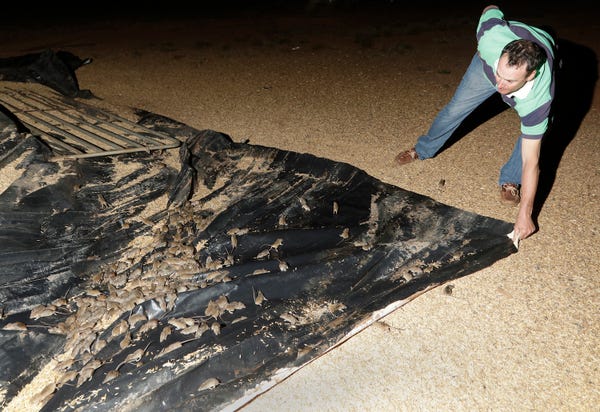 Earlier this month, the state government ordered 5,000 liters of Bromadiolone, a poison that can kill mice within 24 hours, according to The Canberra Times. Some farmers told the newspaper it would not be enough to halt the infestation in the entire state.

Steve Henry, an expert on mice, said the creatures would not be heading to major cities like Sydney, The Guardian reported. “Moving is a really dangerous thing for a mouse to do because it puts itself at risk of predation,” he said.