Gourmet potatoes favoured by top chefs and typically found only on the menus of high-end restaurants are to go on sale in Tesco this week to avoid them going to waste.

The move aims to ease a glut of fresh potatoes in the UK, with thousands of tonnes unused since the government ordered the closure of hospitality businesses on 23 March.

The specialist potato grower Carroll’s Heritage Potatoes, based near Berwick-upon-Tweed in Northumberland, supplies top restaurants across the UK with its distinctive, colourful spuds and works closely with celebrity chefs such as Tom Kerridge and Jamie Oliver. 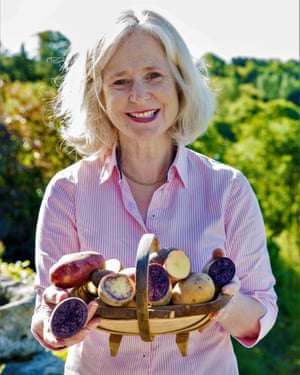 Sales have collapsed since lockdown, leaving it with a surplus. While some of the potatoes could have been put in limited storage space, a large proportion would have ended up rotting.

This week four of the 14 heritage potato varieties grown by Carroll’s will go on sale in 600 branches of Tesco. They include red King Edward 1916, a creamy-tasting spud with an unusual red and white skin; the distinctive blue-skinned violetta; and yukon gold, renowned for its rich flavour akin to “built-in” butter.

Lucy Carroll founded the business with her husband, Anthony, 20 years ago and diversified into growing rare heritage varieties in 2005.

Carroll said: “These are not commercially grown heritage potato varieties, and we produce them for a niche but loyal market of top chefs and restaurants. We produce them twice a year, right now in mid-spring and then later in the autumn, so the pandemic could not have come at a worse time for us. Through word of mouth we made contact with the supplier Branston, which works with Tesco, and managed to find us a major outlet.”

The lockdown has led to serious disruption of the fresh produce supply chain, with food producers and wholesalers struggling to deal with tens of thousands of tonnes of perishable fruit and vegetables no longer required by restaurants, hotels and schools. Where possible they have donated to food banks and food distribution charities, but much of the stock has been languishing unused in warehouses.

Potatoes have been hard hit because of the huge volumes that usually go to the UK’s 10,500 fish and chip shops, most of which closed at the beginning of the lockdown, and some of which have now started to reopen. The Agriculture and Horticulture Development Board estimates that in a best-case scenario there will be 95,000 tonnes of unwanted “chipping” potatoes in storage at the end of the season in July.

In Belgium, farmers have urged consumers to eat frites, a double-fried chip, twice a week in order to help deplete the potato surplus.

Fast-food restaurants such as McDonald’s, KFC, Burger King and Nando’s are gradually reopening in the UK to offer takeaways and deliveries, but even that will barely dent the surplus, industry figures say.