See the scene at the Kabul airport

(CNN)One week after the Taliban takeover of Kabul, the situation at the capital’s airport has become increasingly desperate, with more than 20,000 people in and around the facility trying to board flights and another seven Afghan civilians killed in crushes, amid one of the largest airlifts in history.

The airport is the epicenter of a chaotic scramble to escape the country for tens of thousands of people — including international workers, Afghan interpreters and women now at risk under Taliban rule.
By Sunday morning, the number of people at the airport awaiting flights had swelled to 18,500, with another 2,000 at the gates waiting to get in, a source familiar with the situation told CNN.

One reason for the chaos was the decision to issue electronic visas to Special Immigrant Visa (SIV) applicants, without names or document numbers. The visas were then copied as screen shots and sent by Afghans to thousands of other Afghans who were not eligible for access to the airport, the source said. 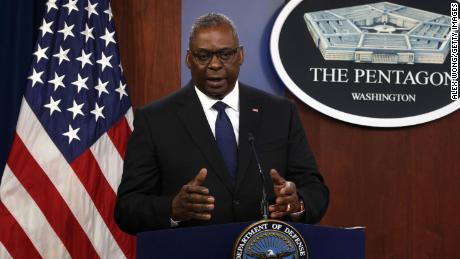 Conditions worsened throughout Sunday, with the airport’s entry gates for the most part closed and instances of families being split up and sent to different countries in the chaos.

“Don’t know what they were doing but there is still local staff struggling at the gates and not even being able to get in,” a source close to the situation told CNN, referring to Afghans employed by the US.
Families were being separated and sent to different countries, the source added. This was “not by design and not really the fault of US officials, but they’re either choosing to come in separately, or getting separated on the way in,” they said.
“They’ve had cases where mum, dad, and children all end up in different countries,” said the source.
Meanwhile the mass evacuation mission continues.
Inside the airport on Sunday, CNN saw several C-17 military planes on standby to take off, with a huge military presence nearby. They are expected to work throughout the night in an effort to clear the backlog of passengers. 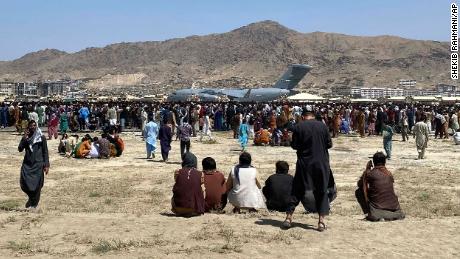 Outside the airport, the scene is incomparable.
Thousands of people continue to gather on the perimeter of the base. Among the harrowing images of families scaling the airport’s boundary walls this past week, a video of a baby being hoisted over the razor wire to a US Marine has hit home the desperation on the ground.
The ill baby was treated at a Norwegian hospital based at the airport, and later returned to his parent, Pentagon spokesman John Kirby said at a briefing on Friday.

The area in and around Kabul’s airport has become increasingly perilous, with almost 20 people believed to have died from stampedes or gunshots in the last week.
Seven Afghan civilians died in crushes near Kabul’s airport on Saturday, a spokesperson for the UK’s Ministry of Defense (MoD) told CNN.
One crush took place outside the airport itself while another happened outside the Baron Hotel, the spokesperson said.
“Conditions on the ground remain extremely challenging but we are doing everything we can to manage the situation as safely and securely as possible,” the MoD spokesperson said. 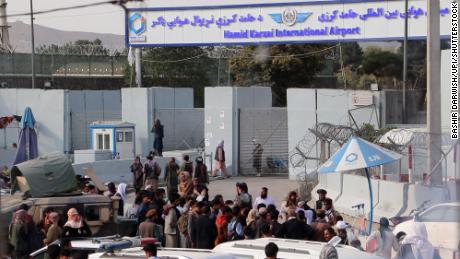 Earlier in the week, Reuters reported that a total of 12 people had also been killed in and around the airport since the Taliban captured Kabul last Sunday. The report, which CNN has not been able to independently verify, cited NATO sources and Taliban officials.
Amid the deteriorating situation, two US defense officials described to CNN the military effort to establish “alternative routes” for people to get to Kabul airport and its access gates, with one saying these new routes will be available to Americans, third party nationals and qualified Afghans.
The Pentagon has been monitoring the situation around the airport, aware that the swelling crowds on the grounds and around the airfield create a target for ISIS-K and other organizations, which may use car bombs or suicide bombers to attack, the second official said. Mortar attacks are another possible threat.

The airport is one of the few escape routes out of the country. And the US is undertaking “one of the largest, most difficult airlifts in history,” US President Joe Biden said Friday, acknowledging that, despite the presence of thousands of US troops at Kabul’s airport, the situation remains dangerous.
At least 38,000 people, including Afghans and foreign nationals, have been evacuated from Afghanistan since the Taliban began its advance on Kabul, according to data analyzed by CNN Saturday.
One journalist lucky enough to escape on a Qatar flight told CNN that he didn’t know whether he was happy or heartbroken.
He had already fled the country once before, when the Taliban was last in power. Now he was again leaving behind family and friends, with no idea when — if ever — he would return to his country. 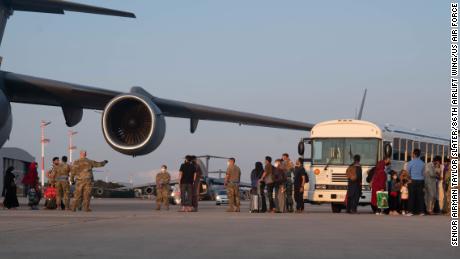 The US has so far evacuated 17,000 people since August 14, a day before Kabul fell into Taliban hands. Out of those 17,000 people, 2,500 of them are US citizens, Gen. Hank Taylor, Deputy Director of the Joint Staff for Regional Operations said Saturday.
Elsewhere, the British Armed Forces have evacuated nearly 4,000 people since August 13, the UK’s MoD said in a tweet Sunday.
Other countries — including Canada, Italy, Germany, France, Turkey and Australia — have also evacuated people.
At the Ramstein US Air Base in southwestern Germany, flights of evacuees were arriving roughly every 90 minutes over the weekend. With a capacity of 5,000 people, one of the largest US air base in Europe was filling up fast with people sheltering in temporary tents before continuing their journey to the US.
The US military hopes to evacuate 5,000 to 9,000 people per day, but so far has not met that goal. It faces massive challenges as it works towards an August 31 deadline to leave the country, and Biden has indicated the US may have to stay beyond that date if all Americans have not been evacuated yet.
Among those criticizing the US withdrawal is former UK Prime Minister Tony Blair, who was leader when his country helped the US push the Taliban from power in 2001.
“The abandonment of Afghanistan and its people is tragic, dangerous, unnecessary, not in their interests and not in ours,” Blair wrote Saturday in an article published on his Institute for Global Change think tank website.

He added that the decision to pull troops out of the country had been done “in obedience to an imbecilic political slogan about ending ‘the forever wars.'”