In the most cramped of times – days as economically and emotionally pinched as the ones we’re living through now, and the ones we survived (or didn’t) in 2008 – theater can remind us of, or point the way to, some sense of emotional generosity, of expansive spirit, of connection. Dominique Morisseau’s Skeleton Crew does all that and more, finding hope in the unlikeliest of places, like a cluttered, ramshackle break room of a noisy, about-to-fail factory in an about-to-fail city like Detroit.

Directed with vitality by Ruben Santiago-Hudson – his second victory this Broadway season following the fall’s Lackawanna Blues – and performed by an ensemble cast that matches a powerful Phylicia Rashad, Skeleton Crew is a play that feels even more pertinent now than it did when it landed in a stellar Off Broadway production back in 2016. The play was terrific then. It’s essential now.

Opening tonight at the Samuel J. Friedman Theatre, this Manhattan Theatre Club presentation examines the barriers and restrictions that pit worker against worker, life against life. The play asks what the individual owes the community, and what the community owes in return. How much should any one person be willing to sacrifice for the sake of her co-workers? Her friends? Her successors? – Skeleton Crew makes as fine and eloquent a case for camaraderie, social responsibility, and common decency as any play currently on stage. It is a tonic.

Don’t misunderstand. Morisseau hasn’t patched together a sentimental feel-good booster shot. Skeleton Crew can be tough as a factory foreman. Characters walk fearfully tight wires, and plunges are an ever-present possibility. We arrive at the end with hope, not assurance.

The set-up is classic American theater, with nods to August Wilson, Arthur Miller and Lorraine Hansberry: Set in 2008, Skeleton Crew takes place entirely in the break room of a Detroit auto factory, where four co-workers share catch-as-catch-can meals, gossip, banter, fears and trepidations – trepidations, above all – as the grind of daily factory life is made all the more tenuous by the ever-present rumors of an imminent shutdown. Closing could bring economic catastrophe to folks – and a city – who have few options left. On top of that, someone has been stealing equipment and materials from auto factories in the area, and suspicion is everywhere.

Over the course of the play, we’ll come to know the secrets and (initially) hidden relationships among these co-workers, but for now we need only know the basics: Dez (Joshua Boone) is the young man wanting more and determined to get it (shades of Hansberry’s Walter Lee Younger). He can seem quick to anger and full of schemes, but looks can be deceiving. Also, he packs a gun. 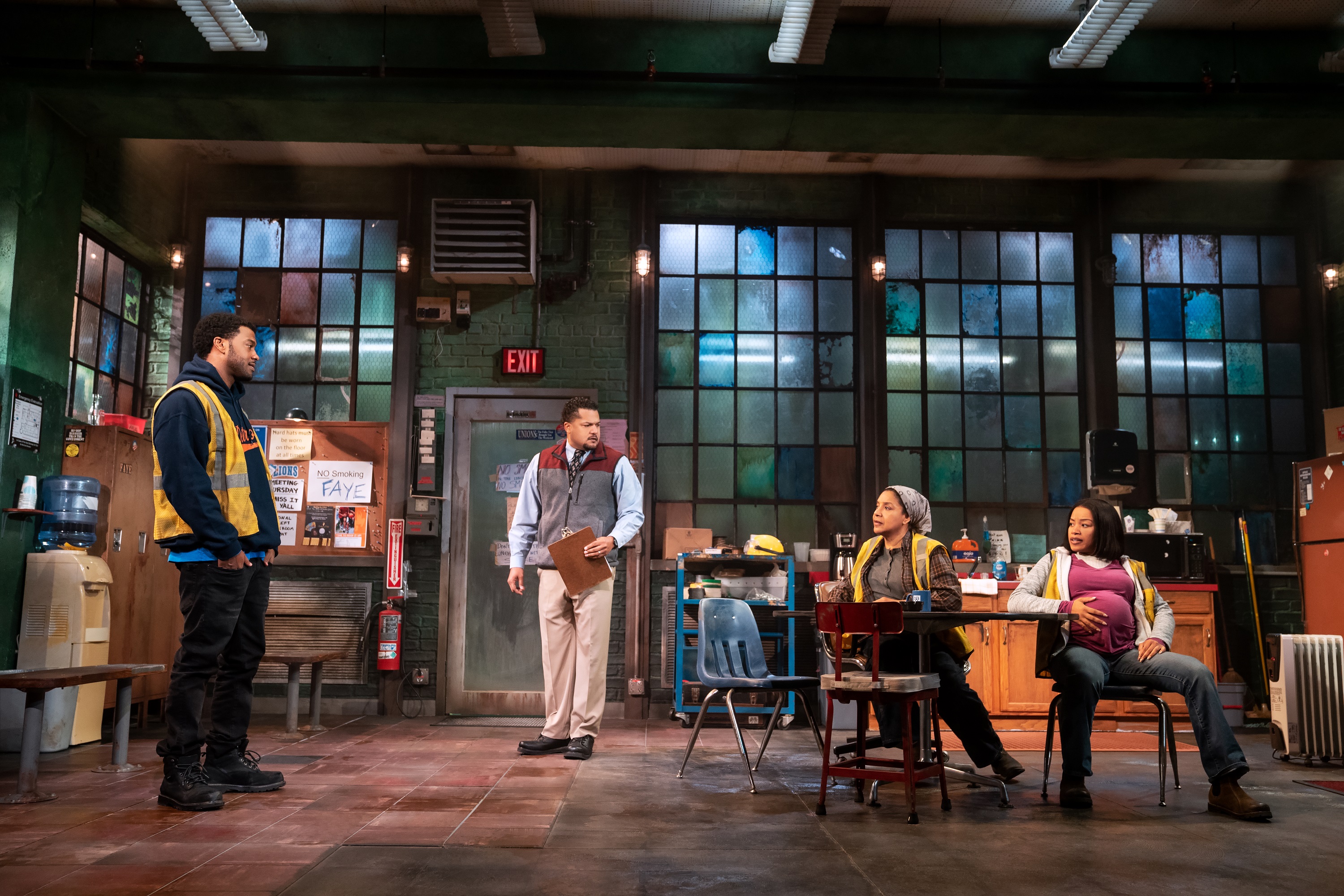 Then there’s Shanita (Chanté Adams), the young mother-to-be who was born and raised a factory girl and delights in the music of the machines, confident in her worth and proud of her work on the line, with a loyalty to her company that seems born of another era. The likelihood of her father’s world existing for the baby she’s carrying is slim to none.

Reggie (Brandon J. Dirden) is the rank-and-file guy made good, a supervisor who initially seems to the audience a familiar trope: the persnickety stickler for detail and martinet lording his newfound status over his old crew. But Morisseau has something more in mind here: If Reggie is demanding it’s because he’s burdened with the knowledge of what will happen should slip-ups slip by. He knows the consequences.

Chief among Reggie’s allies: Faye (Rashad), the crew elder who has a year to go before retirement, the righteousness of a longtime union rep, the wisdom of a woman who knows factory life inside and out and the flinty compassion of a stern den mother.

Faye has secrets of her own – she never seems to leave the factory, and her maternal devotion to supervisor Reggie is only gradually explained (no, she’s not his mother). 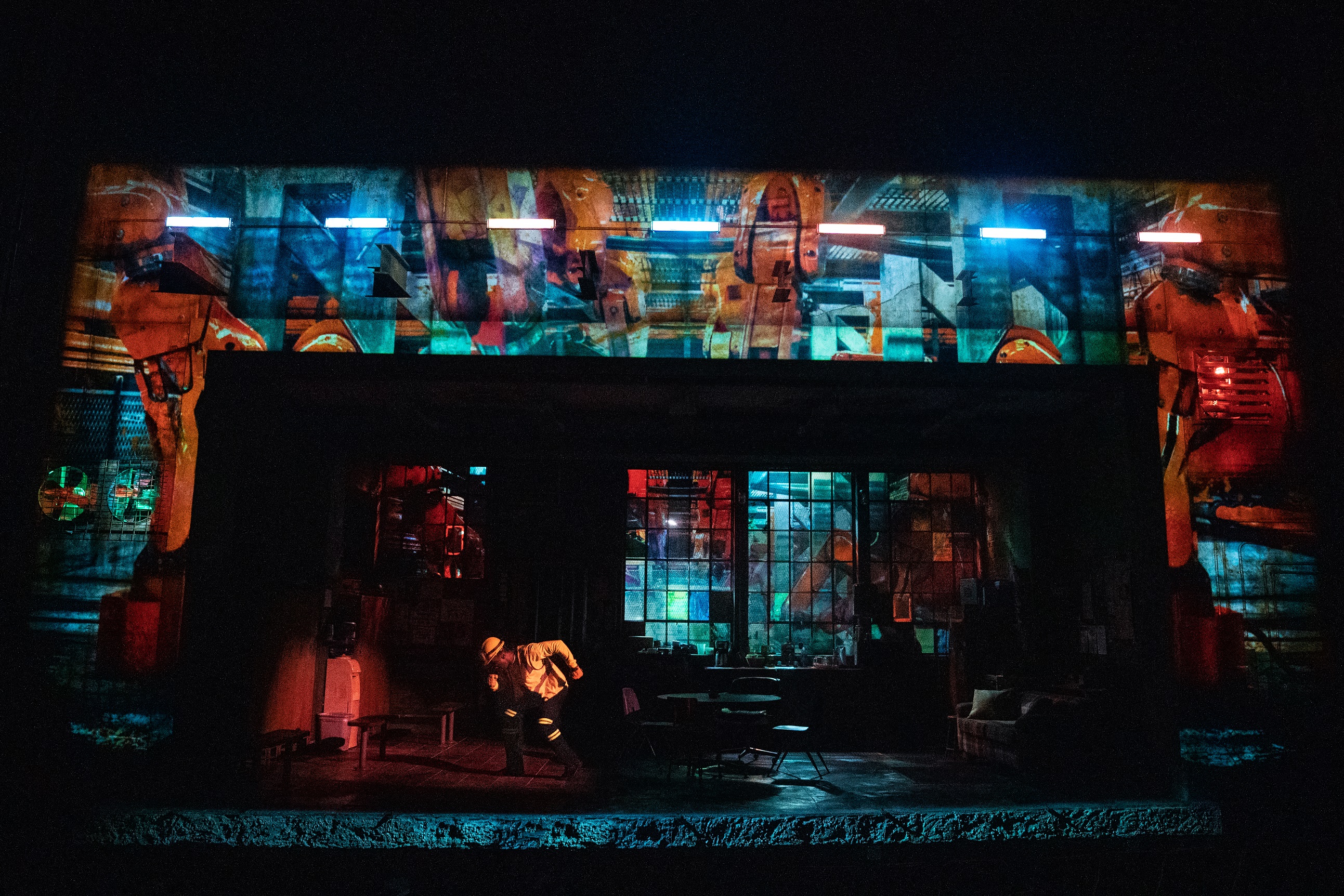 Morisseau and Santiago-Hudson confine these people and their pressures within the single break room set – well-designed by Michael Carnahan, with a realism that, at least initially, extends to warning signs about face masks and phone noise. (Emilio Sosa’s costume designs ring equally true). Nicholas Hussong’s lovely video projections of clinking, clanking machinery splash onto the set during scene changes, accompanied by the dance beats of Jimmy Keys and the actual dancing of Adesola Osakalumi. In all, the production design suggests the pulsing, humming life of an entire working factory without leaving that break room.

Breathing air into that life is the excellent ensemble of actors. Dirden and Boone give two of the most explosive and nuanced performances in a Broadway season that’s been lacking in neither. As the pregnant worker who seems to be instilling pride in her yet-to-be child through simple acts of dignity and perseverance, Adams captures the love of tradition and hope for something better that marks her character.

Rashad, who won a Tony Award for her performance in the 2004 revival of A Raisin In The Sun, reminds anyone who needs reminding just what a commanding stage presence she is, once again vanquishing all remnants of her signature, rather grand portrayal of Clair Huxtable on ’80s sitcom The Cosby Show (not to mention her more recent, ill-received comments supporting that show’s star).

As the seen-it-all Faye, a Black, lesbian factory worker with an estranged son, a couple addictions and a grief that haunts her every move, Rashad grounds Skeleton Crew with a portrait of survival that’s as sobering as it is inspiring. No quarter is given to sentimentality – not in the acting, the direction or the writing – and while despair lurks just beneath every overtime shift, Rashad and Skeleton Crew manage to stay one step ahead.