Tatas in talks with Taiwan firms to make chips in India

Tata Group is in discussions with some major international companies, including those from Taiwan, for its foray into the semiconductor chip business. 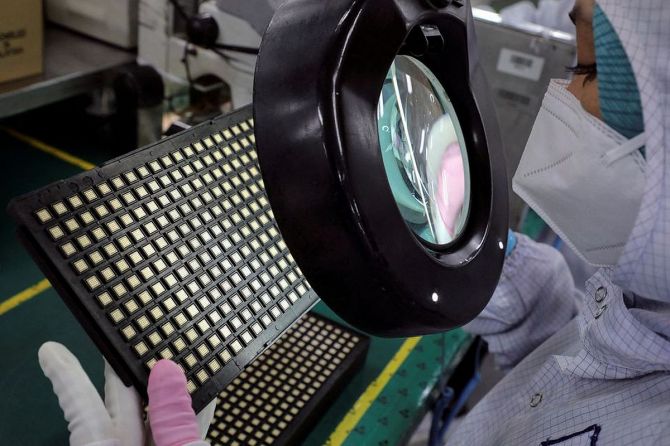 A person close to the development said the Tatas have now opened a separate channel for a possible tie-up.

Currently, India mostly imports chips, which are fabricated and assembled to put into various applications, including automobiles, renewable power, mobile phones, televisions, and other electronic items.

A spokesperson for Tata Sons did not respond to detailed email queries on a possible tie-up and discussions with international partners.

With presence in automobile manufacturing and renewable power, Tata Group has a captive requirement for chips.

Group company Tata Elxsi is already into the business of semiconductor services that includes artificial intelligence tools and frameworks, design solutions, and development.

The group has also begun setting up a greenfield electronics manufacturing unit in Tamil Nadu.

While the Indian government was keen to set up a manufacturing centre with Taiwanese company TSMC and later UMC through a collaboration with Indian Space Research Organisation outfit Semi-Conductor Laboratory (SCL), the discussions did not make much headway because the incentives being offered were low.

Besides, India could not offer a free trade agreement, which was one of the bargaining chips put forth by the Taiwanese side, said another official in the know.

Chips required for fighter jets are made at Mohali-based SCL, which is a research and development facility engaged in design, development, fabrication, assembly of application-specific integrated circuits, and micro electro mechanical system devices.

The government is looking to incentivise semiconductor manufacturing through a production-linked incentive (PLI) scheme.

The Union Cabinet is expected to soon approve expressions of interest put in by companies to put up units under the scheme.

Under the scheme notified in September this year, Rs 38,601 crore worth of incentives, over a six-year period ending March 31, 2027, would be offered under the PLI for the electronics sector, which includes the semiconductor industry.

The government could, however, top up the scheme through a separate funding channel for semiconductor chips.

Among the government-approved projects for semiconductors is the establishment of a gallium nitride ecosystem enabling centre and incubator for high power and high frequency electronics by the Society for Innovation and Development and for assembly, testing, marking, and packaging of NAND Flash memory.