These are the unexpected winners of the grocery wars

Since Normandin launched the drink in 2015 he’s expanded the company, rebranding it as Iris Nova and adding other beverages to its portfolio. And soon, Dirty Lemon will make the ultimate jump into the mainstream: It will be available at Walmart — something of a sea change for the company.
Selling at Walmart is “different than the way that we’ve historically sold Dirty Lemon,” Normandin told CNN Business. But, he said, at this point working with retailers is “the only way forward.”

Dirty Lemon isn’t the kind of product you’d expect to find at a Walmart, known for its bargain-basement prices. A one-time online purchase of six Dirty Lemon bottles costs $65, or about $10.83 per bottle. The product will be less expensive at Walmart.
Iris Nova sells about a dozen varieties of Dirty Lemon, each has a water and lemon base, plus other ingredients that claim to have specific health benefits. Dirty Lemon Aloe, for example, is billed as a “skin hydrator.” Dirty Lemon calls its Rose drink an “anti-aging elixir.” 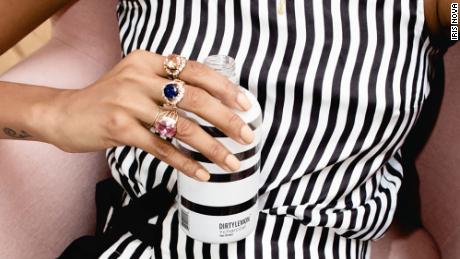 With its chic messaging and premium price point, Dirty Lemon is marketing to a niche demographic. Launching in Walmart could be a huge opportunity for Dirty Lemon to broaden that audience. But it could also take away some of the startup’s charm and muddy its brand identity.
“The connection to some of the more traditional establishments might take away from the allure,” said Brian Choi, managing partner and CEO at the Food Institute, a food industry news and market research company.
But, he added, selling in retail is the only way for small beverage companies to grow.

From ‘Drug Stores’ to Walmart 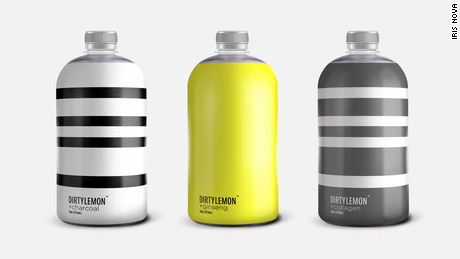 When Dirty Lemon first launched, customers could order the product only online. Later on, they could also pick up bottles from “drug stores,” a handful of locations with fridges stocked full of products and no employees. Customers are expected to use the honor system: After making a selection, they are instructed to text the company, which then charges their accounts.
The flashy methods earned Normandin a lot of attention. In 2018, Iris Nova announced a $15 million round of seed funding, which included a slew of venture capitalists and celebrity investors, including Kate Hudson, Sophia Bush, Alex Rodriguez and Scooter Braun. Notably, that round of funding also included Coca-Cola’s Venturing and Emerging Brands arm.
But the spotlight and support wasn’t enough to help Iris Nova get to the next level.
Over the past few years, Normandin said, it started to make sense for Iris Nova to enter into retail. It’s much more expensive to acquire customers online today than it was three or four years ago, he explained.
“The marketplace is too cluttered,” he said. “There’s a lot of brands trying to sell things to consumers. It’s not sustainable long term.”
Iris Nova is private and doesn’t disclose many sales figures. But the company says it has over 200,000 total customers throughout the United States. Since it started in 2015, it has sold more than 3 million bottles, it added. It plans to be profitable this year, with the help of the Walmart deal.
Walmart sells to 275 million people a week globally and operates thousands of stores around the world. Space on Walmart shelves means exposure to millions of potential new customers.
For Walmart, selling Dirty Lemon is a way to appeal to health-conscious shoppers.
“Walmart is always looking for new, interesting and innovative products to offer our customers,” a company spokesperson told CNN Business in an email. “Dirty Lemon already had a loyal online customer base that was highly satisfied with the products.”
The retailer plans to sell three varieties of the beverage: Dirty Lemon Charcoal, Dirty Lemon Collagen and Dirty Lemon Ginseng. Each bottle will cost $6.99.

Sticking to its mission 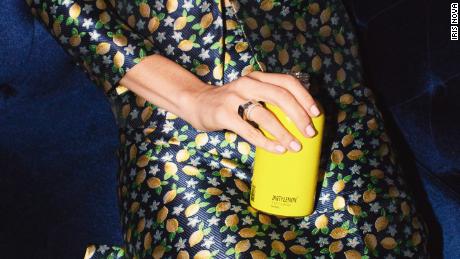 Even though Dirty Lemon will be sold at Walmart, Normandin hopes that customers will ultimately buy the product directly from Dirty Lemon’s website.
“We want people to fall in love with Dirty Lemon beverages in Walmart stores,” he said. “And then when they want to purchase the product … they’re able to do that direct from us.” He is rethinking the company’s pricing strategy, he said, to try to bridge the gap between the retail and online price.
And though they’ll appear on Walmart (WMT) shelves, customers won’t be able to buy the beverage on Walmart’s website.
When beverage companies evolve, Choi from the Food Institute said, they risk losing what makes them special. Millennial shoppers who feel like they’re part of a special club by buying Dirty Lemon online or via text message may be turned off by its presence at Walmart.
But, Choi said, working with retail is essential.
“The pros outweigh the cons,” he said. As attractive as the direct to consumer model may be, there are signs that it’s an unreliable method. Choi points to Blue Apron (APRN)‘s epic losses as a cautionary tale. Retail may not be the trendiest option, but it provides a viable path forward. Starbucks (SBUX), he said, is an example of a brand that has been able to hit the mainstream while still making customers feel special.