This company wants to cut your grocery bill in half

Dollar General (DG), Dollar Tree (DLTR), Family Dollar (owned by Dollar Tree), Five Below (FIVE) and Grocery Outlet (GO) have all started offering delivery from stores over the past year.
They are tapping delivery companies, such as Instacart and DoorDash, relying on the platforms’ network of independent contract drivers to pick and deliver same-day orders from their stores. The platforms receive a cut of the sales.

The chains have said in recent months that offering delivery will help them get a cut of spending from existing shoppers who have increased their online buying during the pandemic. The stores will be listed on delivery platforms’ websites, and they’re betting that they can draw customers who have never shopped with them before. 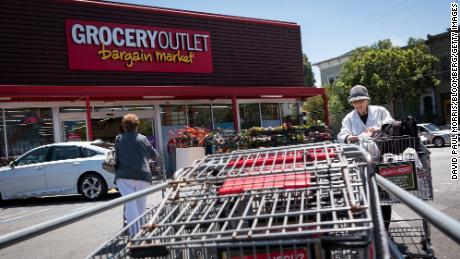 “We think being online initially here through this pilot with Instacart is a great way for us to introduce the brand” to new shoppers, Grocery Outlet CEO Eric Lindberg said on an earnings call last month. Grocery Outlet, sometimes known as the TJMaxx of supermarkets, announced in October that it was testing delivery at California stores for the first time in its 75-year history.

These companies want customers to shop inside their stores — and until recently resisted offering delivery because of concerns about profitability, how it would impact in-store sales, and lack of demand from their customer base.
Online delivery is notoriously unprofitable, which clashes with discount stores’ low-cost operating models. Their ability to sell stuff for cheap hinges on keeping overhead down, so building their own delivery networks, for example, would be prohibitive.
The average shopper only spends around $10 when they shop at dollar stores and around $15 at Five Below, making it even more difficult to pull a profit off online sales than competitors racking up significant revenue each time a customer orders online. 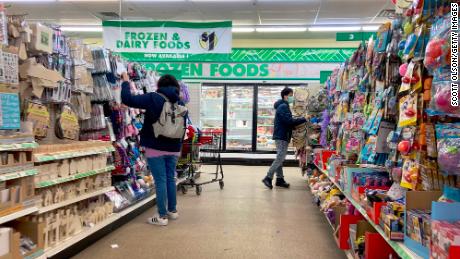 Some of these stores are designed to be a “treasure hunt,” where customers make impulse purchases when they go inside and pick up a couple items that catch their eye. Unplanned purchases occur less frequently online.
Customers “are not beating down our door to deliver groceries,” Lindberg said in a March interview with CNN Business. “I don’t think it’s profitable” for supermarkets, and it’s “very hard to replicate the treasure hunt, replicate the values online.”
Similarly, Dollar General CEO Todd Vasos said at conference in September of 2020 that “our core consumer, while starting her digital journey, is still behind the curve somewhat from where the rest of America is.” Dollar General’s core customers make about $40,000 a year per household.
Dollar General had offered buy online, pickup in store and scan-and-go, which allows shoppers to scan and pay for items off their phones without waiting in checkout lines. But online delivery “is not that important” to Dollar General’s primary shoppers, Vasos said last year.

A change of heart

Many discount chain remain delivery holdouts, including Trader Joe’s, Burlington (BURL), Ross Stores (ROST) and Ollie’s Bargain Outlet (OLLI). But Grocery Outlet, Dollar General and others have shifted their stances.
They are reacting to competition, increased demand from their customers for online options, and the growth of platforms like Instacart that can run their delivery operations.
Their discount competitors such as Walmart (WMT), Target (TGT), Costco (COST), Big Lots (BIG) and Aldi have found success delivering to shoppers, while drug stores and convenience stores have also expanded online. They risked losing customers eager to buy online to rivals had they continued to hold out on delivery.
The Covid-19 pandemic has also pushed millions of people to buy online for the first time, including many of shoppers within these chains’ lower-income base.
E-commerce sales grew from 11% of all retail sales around the start of the pandemic to a high of more than 15%, according to Department of Commerce data. Online sales are expected to continue growing at a faster pace than physical sales in the coming years.
“They heard enough from their customers and investors that would be demand for it,” said Joseph Feldman, a retail analyst at Telsey Advisory Group.
Despite the growth of online shopping, discount chains’ move into online delivery through partnerships does come with some risks.

Instacart, DoorDash and other delivery platforms are starting to build warehouses of their own and stocking them with food, household essentials and other merchandise. There is a possibility that — knowing exactly what Dollar Tree or Five Below buy off their website — the platforms try to steer the chains’ customers away from them and toward their own new offerings.
And some stores worry that customers will replace visiting the store with buying online, Feldman said. This would cut into the chains’ more profitable in-person sales and lead them to make fewer of the impulse purchases that are crucial to the chains.
Source: Read Full Article