Welcome to Insider Cannabis, our weekly newsletter where we’re bringing you an inside look at the deals, trends, and personalities driving the multibillion-dollar global cannabis boom.

Sign up here to get it in your inbox every week.

Never a dull week in the cannabis (and psychedelics industry). The biggest headline news this week is Atai’s monstrous $157 million raise. CEO Florian Brand told Yeji the company is “doubling down” on its strategy — you can read her report here.

Beyond that, I asked Jason Wild of JW Asset Management for his top cannabis picks for 2021. In short, he’s bullish on US cannabis.

And last, I had the chance to chat with five-time NBA All-Star Chris Webber about his new $100 million cannabis equity fund and his push to make cannabis more inclusive from the start.

“I don’t know of any other industry where this type of vested interest has been made to make change,” Webber told me. “It hasn’t been in tech — tech is lucrative. It damn sure wasn’t in cotton, it wasn’t in transportation.”

You can read more from him here.

Here’s what we wrote about this week:

The biggest private psychedelics company in the world just raised a record $157 million, pushing psychedelics further into the mainstream

Just months after breaking the record for the largest funding round in the psychedelics field, Atai Life Sciences has raised another $157 million to continue to develop treatments for mental illnesses like depression, addiction, and anxiety. CEO Florian Brand told Insider the money will be used to “double down” on the company’s strategy.

His hedge fund, JW Asset Management, returned over 146% in 2020 — buoyed by significant investments in the cannabis industry. In an interview, Wild shared the six cannabis stocks he’s betting on, including Trulieve and TerrAscend, Green Thumb Industries, and more.

Former NBA All Star Chris Webber is launching a $100 million fund to help minority entrepreneurs get ahead in cannabis. He told why it’s crucial to build an inclusive industry from the start.

Webber is launching a $100 million fund to invest in Black and other minority cannabis entrepreneurs. He told Insider he has a unique opportunity to ensure that the cannabis industry is inclusive from the start.

Chart of the week 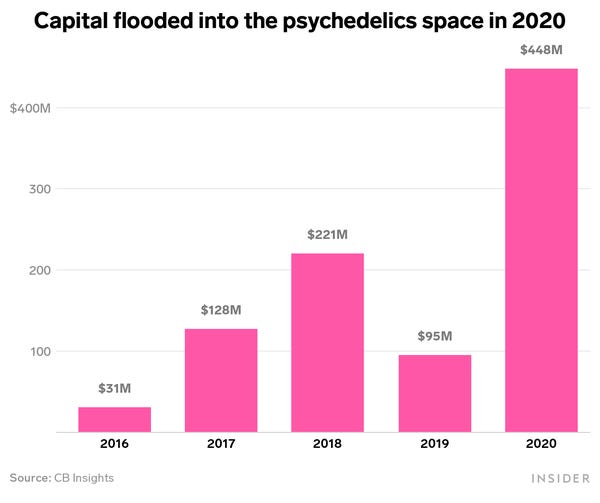