That is the message of Uprooted, a powerful short film that UNHCR, the UN Refugee Agency (www.unhcr.org), has released that was made by and features Ukrainian refugees now living in Germany.

Trauma’s impact can blight the lives of refugees for years, often for as long as they live.

Every refugee – whoever, wherever, whenever – needs the support and embrace of everyone, says UNHCR, to help overcome what they have been through and to feel in some way rooted again.

More than 50 refugees from Ukraine were involved in the project, including: writers, choreographers, designers, casting producers, styling assistants, set dressing, make up, music and all the talent featured in the film. 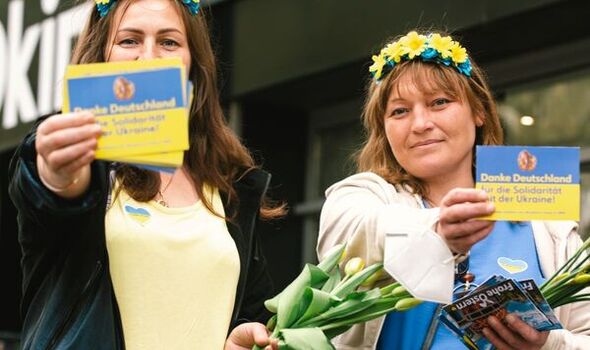 The sound track’s piercing noises – a door slamming, the sirens of an ambulance, the bangs of a firework display – convey an insight into the post-traumatic stress caused by experiencing and fleeing war, the terrifying memories arising afterwards.

Olya, a dancer, actor and Ukrainian refugee is seen in the first seconds of the film running out of a flat after a door slams, triggering memories of being in the midst of conflict.

About her own experience, Olya said: “I was at home, drinking tea when I saw a missile strike the house opposite. My mum told me I had to leave Ukraine straight away. Now, whenever I hear loud noises, I get scared. I just picture that bomb. That’s why I played this role in the film, because it’s actually what happens to me every day in my life. We made this film to support refugees all over the world experiencing the same trauma. When we share our stories together, that is our power.”

Margarita, a clothes stylist and Ukrainian refugee in the film, reflects: “I saw dead people. This is something that I should never have experienced, ever in my life. I’m a peaceful person and I work in fashion! We had this idea that we wanted everybody in the film to wear a piece of clothing that they wore when they had to flee their home. This meant that they wouldn’t need to act, but just feel that moment that really happened to them.”

UNHCR spokesperson Joung-Ah Ghedini-Williams said: “The Ukrainian refugee cast and crew at the heart of this film are calling for solidarity, compassion and support for all those forced to flee around the world.

“UNHCR is working to provide support like psychosocial counselling and working with host communities to welcome refugees because it is essential for the long-term recovery of all those who have fled war. As this film so powerfully shows – all those displaced by conflict or persecution, from Ukraine and across the world – need our continued embrace and unwavering support to survive the memories of war.”

Uprooted was directed by Stink Films’ Andzej Gavriss who wrote the concept with Ukrainian choreographer, Konstantin Koval and Don’t Panic London’s Creative Partner, Rick Dodds. Production took place in Berlin, a city that does forget the pain of conflict.

The war in Ukraine has caused one of the largest human displacement crises in the world today. Millions of refugees have crossed into neighbouring countries, and many more have been displaced inside the country. Globally, recent figures show that there are now over 100 million displaced people around the world.

The number of people forced to flee their homes has increased every year over the past decade and stands at the highest level since records began, a trend that can be only reversed by a new concerted push towards peace making, says UNHCR.

By the end of 2021, those displaced by war, violence, persecution, and human rights abuses stood at 89.3 million, up eight per cent on a year earlier and well over double the figure of 10 years ago, according to the agency’s annual Global Trends report.

Since then, the Russian invasion of Ukraine – causing the fastest and one of the largest forced displacement crises since World War II – and other emergencies, from Africa to Afghanistan and beyond, pushed the figure over the dramatic milestone of 100 million.

“Every year of the last decade, the numbers have climbed,” says the United Nations High Commissioner for Refugees, Filippo Grandi. “Either the international community comes together to take action to address this human tragedy, resolve conflicts and find lasting solutions, or this terrible trend will continue.”

Last year was notable for the number of conflicts that escalated and new ones that flared; 23 countries, with a combined population of 850 million, faced medium or high-intensity conflicts, according to the World Bank.

Meanwhile, food scarcity, inflation and the climate crisis are adding to people’s hardship, stretching the humanitarian response just as the funding outlook in many situations appears bleak. The number of refugees rose in 2021 to 27.1 million. Arrivals climbed in Uganda, Chad and Sudan among others.

UNHCR’s UK Representative Vicky Tennant noted that the overwhelming majority of people forcibly displaced remained either within their own countries or are hosted in ones nearby.

She paid tribute to the warm welcome provided by many communities and families of refugees arriving in Britain during the past year, especially from Afghanistan and Ukraine “They have opened their doors to refugees and shown that a proud tradition of sanctuary and welcome continues in Britain today,” she said.

“That same solidarity and compassion must also be extended to people fleeing war and persecution anywhere in the world, regardless of their nationality or how they arrive.”

The Global Trends report also contains glimmers of hope. The number of refugee and IDP returns increased in 2021, returning to pre-COVID-19 levels, with voluntary repatriation having surged 71 per cent, though numbers remained modest.

And although the estimated number of stateless people grew slightly in 2021, some 81,200 acquired citizenship or had it confirmed – the biggest reduction in statelessness since the start of UNHCR’s IBelong campaign in 2014.