Walmart’s new COVID-19 emergency sick leave policy falls short of what’s needed to protect employees and customers, leaving workers afraid they’ll be forced to come to work even if they feel sick, according to a review of internal documents and conversations with staffers across the country.

The company touted its new policy as prioritizing the health of employees, but it actually applies only to a narrow segment of workers ― those who test positive for the coronavirus currently spreading across the world. It doesn’t cover those who feel sick and haven’t been tested, are immunocompromised, or came in close contact with someone who is ill.

Walmart workers told HuffPost they still feel pressure to come in and interact with big crowds of customers as the epidemic spreads; some said they’d like to stay home but couldn’t afford to do so. With the pandemic likely to continue for months, Walmart workers who are older or immunocompromised, or close to those who are, could be at high-risk.

One 20-year-old associate in the Midwest, who like others quoted in this story asked to remain anonymous for fear of reprisal, said he wasn’t that worried about becoming sick but that he lives with his parents and both have health conditions that put them at risk.

“Several people I work with are in the same condition, they’re at home with family members, people in hospice care,” he said. “People at the store with heart conditions are still coming in.”

Walmart is the largest employer in the private sector, with 1.5 million U.S. employees. It’s also seeing an incredible surge in business right now as panicked Americans stock up on groceries. The moves it makes on sick leave will be both incredibly influential on other major retailers, and with so many workers and such big crowds, a key part of the public health response to the outbreak.

Walmart announced its emergency policy on March 10. It gives staff 14 days of paid sick leave if they’re diagnosed with the coronavirus or officially placed under quarantine by a government official or doctor. After that, workers can take longer-term leave, if they qualify, and earn up to $200 per week. It’s not much, considering that a copayment to the emergency room under the company’s health plan is $300, according to a document reviewed by HuffPost. 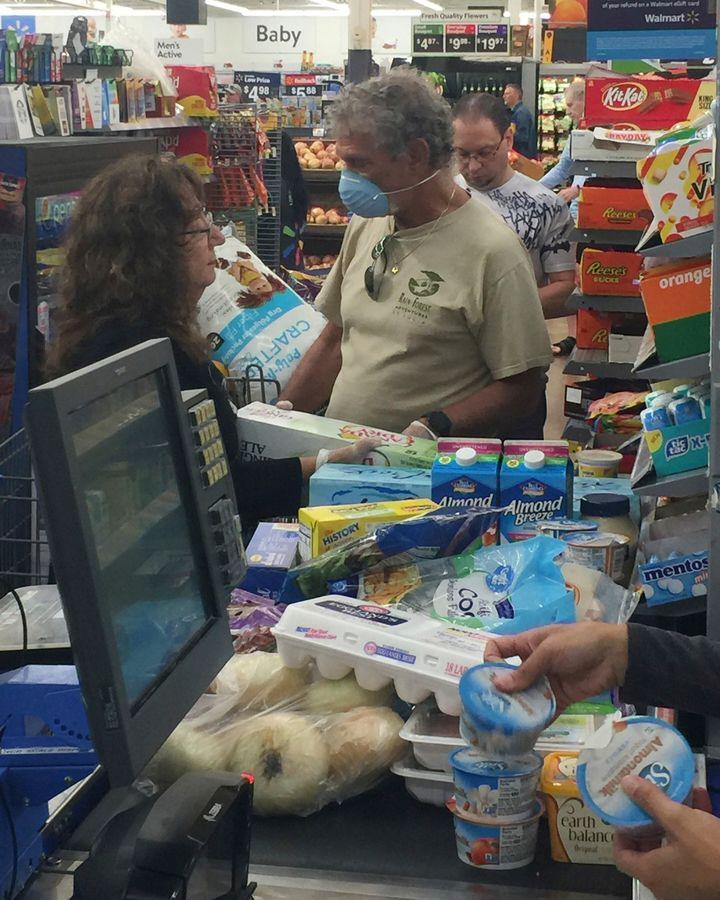 The company’s initial announcement led some workers to believe the policy would apply to those who felt sick or had been in contact with someone ill, even if they had not officially been diagnosed.

“Your health is our priority, and, as we’ve said before, we want any associate who is not feeling well to stay home,” said the press release.

That’s not the case.

In the memo, as well as in subsequent messages to employees reviewed by HuffPost, Walmart makes clear that those who choose to stay home without an official diagnosis would not receive the emergency paid sick leave.

All Walmart was doing was getting rid of its usual penalties on those who call in sick. Typically workers are allowed five such “occurrences” in a six-month period, after which they can be fired. Now, if they stay home because they are unable to work or feel uncomfortable going to work, their job is protected and they will not be penalized for up to 14 days, or longer with a doctor’s note, according to one document.

An associate who makes $12 an hour working overnight stocking shelves in Virginia said he’s unsure whether he should quit. “I feel Walmart will not support my personal decision [to] stay home if this gets worse in my area,” he said.

The Virginia associate doesn’t have health insurance and worries about the costs of getting sick. “I also don’t want to be another irresponsible person walking around spreading [coronavirus],” he said. 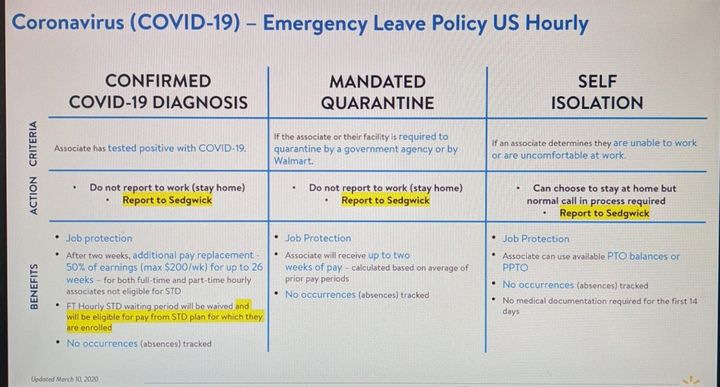 A Walmart worker based in Florida said the policy details were a disappointment. After he first heard about the new policy, he “finally felt like we were put as a priority.”

“We have to endure every major storm, shootings, and whatever other personal problem that arises and still show up to work, otherwise it is held against us,” he said.

But this associate said he was let down once he learned the details. “It seems like this policy was just done to make the company look better without actually doing anything.” he said. “As per usual the shareholders and customers were put above us.”

Walmart’s new COVID-19 leave policy as written is overly complex and restrictive, said Rachel Deutsch, supervising attorney for worker justice at the Center for Popular Democracy. (Her organization sometimes teams up with United Food and Commercial Workers, the union that advocates for Walmart workers.)

“It’s this fake thing designed to telegraph to consumers it’s safe to shop there, but not a benefit that workers are going to be able to access in this moment when things are escalating every day,” Deutsch said. “There will be people who die who work at Walmart because of this policy.”

If Walmart was serious about protecting workers and customers, the company would trust its workforce and tell them they can stay home and still get paid if they’re feeling unwell or are uncomfortable coming in, Deutsch said.

Still, Walmart received kudos for the policy, as did other employers who announced similar benefits. 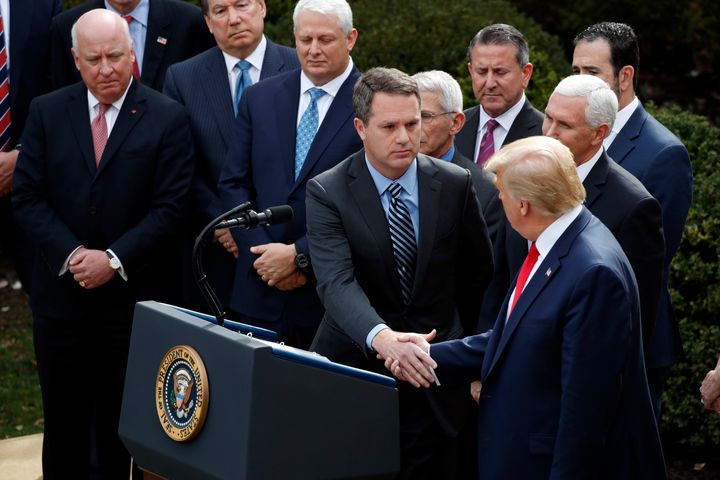 Walmart CEO Doug McMillon appeared at a news conference with President Donald Trump last week, pledging the company would do whatever it could to help battle the pandemic.

Yet the Trump administration and big business lobby pushed to make sure that a federal paid sick leave policy, passed to deal with the public health crisis, would not apply to large companies.

“The carve-outs in this bill show the power of the organized business lobby and lay bare the disingenuous statements of the President, who pledged earlier this week to require the large businesses carved out of the package to provide emergency paid sick and family leave,” Vicki Shabo, a senior fellow at New America, said in a statement Wednesday night condemning the bill.

The lack of universal paid sick leave in the United States has come into the spotlight now, as the country tries to slow the spread of this virus.

It’s low-wage hourly workers like those at Walmart who are mostly likely to have no access to paid time off when they’re ill. More than half of workers at the large companies in the U.S. say they don’t have access to paid leave, according to one recent survey.

Working Through A Pandemic

While many restaurants and stores are closing during the outbreak, Walmart and other grocery and retail stores are remaining open ― and seeing record-breaking sales ― putting workers at risk to serve the public.

In fact, when Walmart announced its new emergency sick leave policy, it also revealed that an associate in a Kentucky store had tested positive for COVID-19.

Walmart said it would keep that store open.

On Wednesday, Walmart announced it was reducing store hours, placing limits on some essential items and temporarily shutting down its auto centers to deal with the crowds. It is also putting in place special shopping hours for seniors — a policy that, while well-intentioned, may still put vulnerable populations at risk.

These changes come amid an epidemic-driven shopping season that most workers said was more intense than the usual Black Friday rush.

Associates told HuffPost about long lines, mad dashes for toilet paper pallets and even fights breaking out as shoppers panic-buy in the face of the virus.

One associate in a small-town Walmart in Virginia said a line forms at her store before it even opens in the morning. She’s feeling increasingly unsafe.

“I do not feel protected from this virus at work,” she wrote in an email to HuffPost. “I see people using their hands to wipe their noses and touching stuff on shelves. People are touching us on the arms and they’re directly in front of us when asking questions. I’ve seen many associates coughing and not covering their mouths. I haven’t called out yet because I can’t afford to be off for two weeks without pay. Especially if I have to be out if I end up getting infected.”

She and several other associates pointed out that corporate Walmart workers are working from home. “They don’t seem worried about us, the employees who are holding this company up,” she said.

Walmart did not yet respond to a request for comment, but publicly, the company has stated that its response to the epidemic is evolving, and that they’re making changes as needed. A few workers said their managers were doing their best to make them feel safe by encouraging hand-washing and using hand sanitizer.

Some workers suggested Walmart give them a bonus, at least. Or hazard pay.

“I wish that Walmart would try to give us a bonus of some kind to help alleviate the stress that all of us associates have, but it’s probably never going to happen,” said an associate in Washington state.

It feels impossible to social distance at work, said Brittany Legowski, a 21-year-old associate in Menomonie, Wisconsin. “The only thing they’ve done is set up hand sanitizer at the front of the store, and I’ve noticed they’re sanitizing the break room more.”

Walmart does have a separate paid sick leave policy, launched last year, through which some associates are able to “earn” paid time off after working a certain amount of hours.

All those people technically have the option of staying home unpaid. But for workers earning around $12 an hour, living paycheck to paycheck, that’s no option at all.

“It’s not as nice as they make it seem in the press release,” said one associate from Tacoma, Washington, who wants to stay home right now rather than risk getting sick at the crowded store where he works ― in the center of one of the most severe coronavirus outbreaks in the country.

But he only has about 10 hours of paid sick time saved up. Since he can’t afford to take an unpaid day off, “I might as well wait till I’m actually sick,” he said.

Keep up with the latest updates on the coronavirus at our live blog.