Watch this robot take over a fry station

New York (CNN Business)It’s harder than you might think to deliver french fries that aren’t too crispy or soggy. Just ask the burger chain White Castle.

Timing is key: Fries need to be in oil for the right amount of time. But employees in fast food restaurants are often subject to a flurry of distractions in the kitchen, which is hot and noisy and gets even more hectic during peak times. They may get caught up in another task and pull fries out of the fryer too early, or leave them in too long. It can be difficult to remain consistent day in and day out.
That’s where Flippy comes in. Last year, White Castle installed the french-fry making robot, made by the company Miso Robotics, in one of its kitchens in a Chicago-area restaurant. The chain recently replaced the original with Flippy 2, a smaller version of the robot that performs more human functions. White Castle has plans to roll it out to up to 10 of its 360 total restaurants.

It’s unclear how much this technology might catch on at White Castle and beyond — and how much it could upend restaurants jobs if it does. 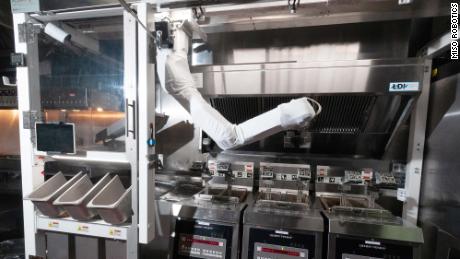 Why restaurants are using robots

Flippy represents one of many solutions pitched by companies to automate food production. Other food sellers are also experimenting with introducing similar concepts to their kitchens.
Inspire Brands, which owns Buffalo Wild Wings, is testing out a Flippy Wings robot — also made by Miso — at its innovation center this fall. DoorDash announced this year that it has purchased Chowbotics, which makes a robot that prepares salads (her name is Sally). Other startups have raised money to make robotic sous chefs and other robotic kitchen aids. At least one has had a very public fall from grace: Zume, a pizza-robot making company that in 2018 received a $375 million investment from Softbank, last year laid off hundreds of employees. It also shuttered its robot business, focusing instead on food packaging.
You won’t be able to find many of these futuristic items in commercial kitchens today. But restaurants have reason now more than ever to be interested in automated solutions, said Michael Schaefer, head of beverages and foodservice research at market research firm Euromonitor International.
Lately, restaurants have struggled to hire the staff they need. So they’re looking for other ways to make their kitchens more efficient, said Schaefer.
That doesn’t mean that robots will replace labor right away, he noted. If automation becomes more commonplace, “I don’t think that necessarily portends mass unemployment in the restaurant industry,” Schaefer said. “But it might certainly mean a reshuffling of where people are working.” 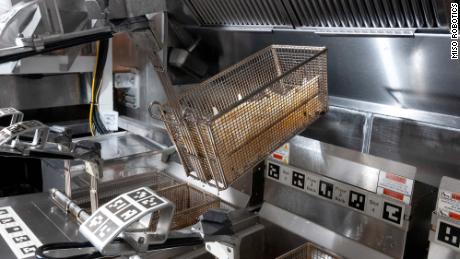 In addition to labor shortages, restaurants are finding that many customers who shifted to takeout and delivery during the pandemic are still interested in that model. So “there’s a general interest in rethinking the layout of restaurants, rethinking the workflow in a restaurant,” Schaefer said. “Every restaurant to some degree has thrown out the rulebook. Everyone’s much more open to trying new approaches.”
Plus, there are more options available to restaurants right now, both because of more investment in the space and because robotics have improved to make more automated kitchens feasible, he said.
Still, there may be limits to what kitchen robots can do, he noted.
“General purpose cooking in a fine dining restaurant — to put together a succession of different dishes consistently every time, night after night — that seems exponentially more difficult,” than cooking french fries or chopping salads, he noted.

Much like a new iteration of an iPhone, Flippy 2 is smaller and more efficient than version 1.0.
The first Flippy needed people to put frozen fries into a basket that the robot could then grab, explained Mike Bell, CEO of Miso Robotics. After that, Flippy — which looks like a huge robotic arm — would dunk the basket into a vat of oil for the correct amount of time, which is pre-programmed, lift it up and leave it for a human employee to empty out.
Flippy 2 can fill the empty fry basket itself by placing it under a dispenser that drops the right amount of fries for a small, medium or large order into the basket. After it’s done cooking, Flippy 2 can dump that basket of cooked fries onto a tray.
Flippy is still very much in a testing phase at White Castle. 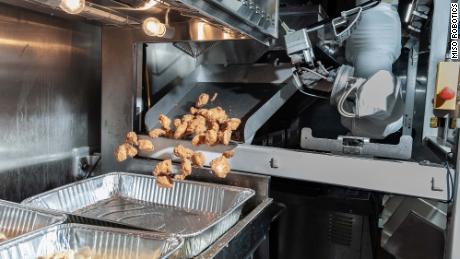 A big part of its appeal is that the robot is immune to human stressors and distractions. It can cook about ten different items including fries and uses artificial intelligence to identify what they are, according to Bell. Flippy, which costs restaurants about $3,000 a month, “can work around the clock. It doesn’t require benefits or days off,” Bell said.

Both Bell and Richardson maintain that the robot is not supposed to replace workers.
With more automation in the kitchen, White Castle employees can take more time talking to customers and doing things robots can’t, according to the company. Flippy is “like any other investment we make in the kitchen that just makes the work easier, and allows us to hire more people over time to do other things,” Richardson said.
Source: Read Full Article