‘Done deal’: Australians spend their way to another rate rise

Australians have likely just spent their way to a 50 basis point increase in interest rates this month, having gone on a mad splurge at the end of financial year sales in June.

The consensus is that there is virtually no escaping a Reserve Bank decision to push rates up by half a percentage point when it delivers its verdict on Tuesday.

While almost all economists are in unison on the prediction that the Reserve Bank will raise rates from 0.85 per cent to 1.35 per cent, ANZ is calling it a “done deal”. 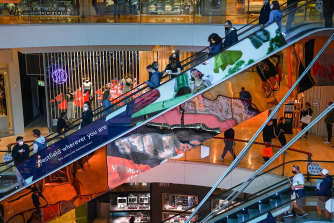 Shoppers spent up big in June but could this be the last gasp before wallets shut?Credit:Kate Geraghty

ANZ’s unequivocal view was cemented by its proprietary data showing spending in shops in the final weekend of June rose 7.7 per cent ahead of the previous weekend – bumping up the monthly overall June number despite a sluggish start to the month.

Only 10 days ago RBA governor Philip Lowe warned that he would be closely monitoring consumer spending – metaphorically lurking behind shop counters to ascertain whether the past two rate rises were having the desired effect of taking some heat out of consumer demand.

He also noted last week that the RBA was weighing up whether this month’s rate rise would come in at 25 basis points or 50 basis points.

Lowe’s clear message to the market was that “no rate rise” wasn’t on the table and neither was a more nuclear option of a 75 basis point rise.

Meanwhile, the June spending splurge wasn’t confined to discount-hunting shoppers, the ANZ’s data showed average daily spending on entertainment in the month was up 14.2 per cent on May, and there was a 10 per cent spike in spending on accommodation in the last weekend of June.

Bizarrely, one of the few categories in which Australians spent less in June was food.

While Lowe called out consumer spending as being high on his watch list for determining how hard the RBA would raise rates, the central bank will also watch plenty of other factors in balancing that decision.

The labour market is an important input. And ANZ’s job advertisement data provides even more fodder for the RBA to keep up the pressure on interest rates. A rise of 1.4 per cent month on month surpasses the March peak and confirms we remain in a particularly tight job market. 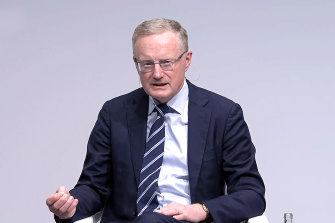 RBA governor Philip Lowe says an interest rate increase of 0.75 percentage points is ‘not on the table’.

The new game in town is predicting what the RBA will deliver in August. Lowe has already forecast that inflation will max out at 7 per cent in December – well ahead of its target range of between 2 and 3 per cent. So there is plenty of work left to be done.

Consumers are certainly sending mixed signals on how they are responding to interest rate rises.

Despite the June spending splurge, consumer sentiment has been particularly soft over the past couple of months. Survey responses to questions on inflation, respondent’s financial future and willingness to purchase a major household item have been weak.

It is possible that June was the last gasp of strong consumer spending before wallets are closed. This is certainly something the RBA will be watching carefully.

Consumer spending and the labour market indicators may be slow to respond to tighter monetary policy but the housing market is doing plenty of heavy lifting. National home prices have fallen over the past two months since the RBA began raising rates – particularly in Sydney and Melbourne.

All the signs of a cooling housing market are now on display – the most glaring of which is that auction clearance rates have fallen to a two-year low.

While across the spectrum of economists there is an expectation that the next 18 months will see residential property values fall by between 15 and 20 per cent, the sensitivity to interest rate rises is somewhat mitigated firstly by the huge pool of savings held by Australians and secondly by the fact that many borrowers used money saved during COVID to get ahead of their interest payment schedule.