Europe has again misjudged the contours, time-lags and politics of the pandemic. Large swathes of the continent will be in an incontrovertible fourth wave by the end of this month, before they are sufficiently vaccinated to ignore the medical consequences. This will be hard to explain.

COVID cases in Spain’s Catalonia region are currently running above UK levels on a per capita basis. Portugal is tracking the UK’s trajectory with only a slight delay, while France’s health minister Olivier Véran says his country may be overwhelmed by late July. As if it were an omen, Luxembourg’s prime minister has been hospitalised with COVID days after attending a summit of EU leaders in Brussels. 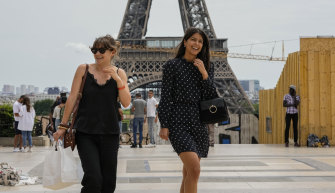 Just in time for the summer travel season, France and other European countries have eased COVID-19 restrictions.Credit:AP

In a surreal twist, the European Commission is actively threatening measures against Germany for imposing a quarantine requirement on its own residents returning from Portugal – that is to say, for trying to prevent more deaths in Germany as a result of largely unnecessary travel. Justice commissioner Didier Reynders says the rules must be exactly the same for everybody. It is doctrinal madness.

We are witnessing a fresh display of the EU’s dysfunctional pathologies. Europe has had the laboratory of the ultra-contagious Indian variant before its eyes in England for weeks but the EU’s collective system has failed to heed the lesson. The mistake repeats what happened earlier this year when politicians played down the dangers of the Kent variant when the EU vaccine roll-out had barely begun.

There is a curious narrative in the French media that France is less vulnerable to the Indian variant than the UK because, firstly, the British have relied heavily on the AstraZeneca vaccine: a dubious conclusion since it has proved equal to Pfizer-BioNTech in real life data. And because, secondly, the British chose to lengthen the time between vaccinations, while France has stuck closer to the three week rule. Yet the UK has vaccinated 51per cent of the total population twice. This compares to 31 per cent in France, 37 per cent in Portugal, 39 per cent in Spain and Germany.

We are witnessing a fresh display of the EU’s dysfunctional pathologies.

A staggering 86 per cent of adults in the UK have had a first dose, just about a world record and a precursor of full-dose ratios. It is a testament to social solidarity but also a political and institutional success. This brings herd immunity into view, allowing the country to open on July 19 and damn the torpedoes.

Boris Johnson’s “freedom day” is viewed as an act of reckless adventurism across Europe. They assume that it will go badly wrong. But the intersecting variables of vaccines, antibodies, age, and time may equally vindicate the decision. If so, the demonstration effect of post-pandemic life in Britain will become increasingly awkward for those EU leaders still grappling with a fourth wave into the early autumn and forced back into coercive measures.

Macron has reopened before reaching a plausible threshold of safety. The pace of vaccination has slowed to under 170,000 a day. There is pervasive abstention.

The risk is a long messy fourth wave that drags into September, contaminating the French rentrée. Mr Macron is already on thin political ice. His vanishing En Marche party was reduced to 7 per cent of the vote in the recent regional elections. The latest Ifop-Fiducial poll suggests that he would lose a run-off match against ex-Gaulliste Xavier Bertrand.

The treacherous circumstances now facing a string of European leaders dates back to the EU’s vaccine strategy last year, a textbook case of how bureaucratic centralisation in Brussels can subtract rather than add value. The EU drew the conclusion – as ever – that the answer is more Europe, not less. 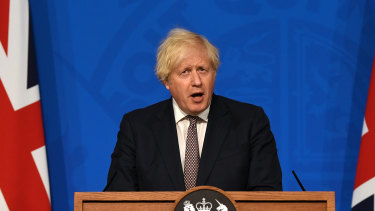 My guess is that the pandemic has fundamentally changed German public attitudes towards the EU. It has done so at a delicate moment when Germany has also been badgered into a large fiscal transfers through the €800 billion ($1.26 trillion) Recovery Fund, initially presented as COVID relief plan but in reality a patronage fund for a European Commission with insatiable ambitions.

It is striking that the German Christian Democrat (CDU) manifesto released under Armin Laschet lays down in no uncertain terms that this fund is a one-off instrument, and not the start of a fiscal union with shared debts. Indeed, the CDU text is an ice-cold douche for advocates of an EU superstate.

What is clear is that the “Grand Reopening” of the European economy flagged by Standard & Poor’s a week ago has already been spoiled. The Club Med summer is in trouble. Jacob Nell from Morgan Stanley says the hit to GDP could be 1.5 per cent for Italy, 1.7 per cent for Portugal, 2.3 per cent for Greece, and 2.5 per cent for Spain in a “severe scenario”.

That is not the end of the world in itself, but amounts to another asymmetric shock. It further widens the North-South chasm, rendering the European Central Bank’s one-size-fits-all monetary policy ever less tenable.

Italy and Spain will not regain their pre-pandemic levels of output until well into 2022 at best. Germany will have closed the gap by the fourth quarter of this year. It is already in a full-fledged boom, at risk of overheating as services catch up with manufacturing.

The ECB has been funding the entire budget deficits of the Latin bloc throughout the pandemic, drawing a veil over the underlying deterioration of sovereign debt profiles. The Banco de España says Spain’s debt has jumped 30 percentage points to 125 per cent of GDP since COVID arrived. Portugal has hit 137 per cent. Italy is flirting with 160 per cent.

It would be inaccurate to say that the ECB is politically captured by the debtor states. It is captured by New Keynesians, who have abandoned the regime inherited from the monetarist Bundesbank. The effect is much the same. Their policy is incompatible over time with German economic needs or cultural traditions, and must ultimately end in a struggle for monetary control.

Nobody should underestimate last year’s incendiary decision by the German constitutional court when it ruled that the ECB has been acting ultra vires, using bond purchases to carry out disguised fiscal rescues in violation of EU treaty law.

COVID-19 has led to a short-term truce and muffled the tensions. But it has deepened the underlying problem and may ultimately bring forward the reckoning between Europe’s creditor and debtor blocs. The fourth wave is freighted with consequences.