Flatlining: China’s economy has been crippled by its zero-COVID policies

China’s economy is flatlining under the weight of its harsh response to COVID outbreaks. Without major fiscal and monetary stimulus it will be near-impossible for the economy to meet Beijing’s growth target for this year.

The June quarter GDP data released on Friday showed an economy growing at a meagre 0.4 per cent, down from the 4.8 per cent recorded in the March quarter. For the first half of the year, the economy grew 2.5 per cent. 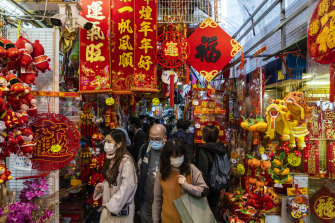 The 0.4 per cent growth was the second-worst quarterly outcome China has experienced in 30 years (the worst was the first quarter of 2020 when the economy shrank 6.8 per cent during the initial outbreak of COVID-19), rendering achievement of the 5.5 per cent growth the authorities have set as the target for this year improbable.

China would need second-half growth of more than seven per cent to reach the full-year target, which would probably require large-scale stimulus; few COVID outbreaks; an end to the problems China’s property market is experiencing and a better outlook for the global economy than appears likely if it is to get close to that growth number.

The weak June quarter data came in well below already-modest expectations, which had ranged from about a one per cent to 1.5 per cent expansion in the economy.

It was also posted despite Beijing having embarked on some stimulatory policies, using tax breaks and incentives to buy new cars and homes, along with a boost to infrastructure spending, to try to offset the impact of the interaction between significant outbreaks of COVID and its own “zero-COVID” policies and the severe lockdowns of major cities they have generated.

There was some evidence of the effects of that stimulus in the June quarter numbers. Retail spending recovered from a 6.7 per cent year-on-year decline in May to post 3.1 per cent growth in June, with the subsidies for new electric cars helping to double their production and underwrite retail spending levels. Infrastructure investment grew 6.1 per cent in June relative to June 2021 and 7.1 per cent year-to-date.

The data, however, also highlighted the continuing problems within a core sector of the economy, with real estate development investment down 5.4 per cent and home sales 29 per cent in the first half of the year.

Last year’s crackdown on property developers’ leverage has cut off developers’ access to funding and left a massive number of uncompleted apartments and, because China’s developers have operated on a pre-sales model, tens of thousands of very angry home buyers who have paid for homes that haven’t been completed.

There are protests in the streets and, increasingly, rising levels of mortgage delinquency and bank loan losses as those buyers refuse to service loans for properties they can’t inhabit. That will add to the existing intense pressure on developers and on a sector that historically has contributed more than 30 per cent of China’s growth. 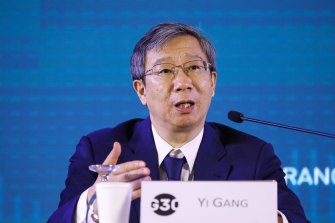 PBOC governor Yi Gang, said the economy was facing “certain downward pressures” because of the pandemic and external factors and would move to provide stronger economic support.Credit:Bloomberg

The recovery towards the end of the June quarter was helped by the re-opening of Shanghai, which had experienced lockdowns in April and May. Shanghai’s economy contracted 13.7 per cent in the quarter.

That underscores how vulnerable the wider economy is to COVID outbreaks. There are still new cases being reported in Shanghai and new outbreaks and lockdowns occurring within the Henan and Guandong provinces. The national daily infection numbers are at near two-month highs.

While the authorities have slightly softened their approach to COVID, Xi Jinping has made it clear that trying to keep control of the outbreaks is his priority, even if it impacts economic growth. That tension might become greater as Xi’s ambitions for an unprecedented third term as national leader reach their moment of truth at the Communist Party’s national congress later this year.

The external environment isn’t favourable for China. The strongest aspect of its economy has been the recovery in its exports but the high inflation rates and tightening financial conditions are slowing global economic growth and threatening a global recession.

The zero-COVID policy has impacted domestic economic activity and, coming after last year’s sudden crackdowns on the property and technology sectors, which left investors nursing significant losses, has triggered a substantial outflow of foreign capital.

Those funds are flowing into emerging markets and towards the safe haven of the US Treasury bond market where rising yields (as a result of the Federal Reserve Board’s response to the surge in inflation to 40-year highs and the consequent strengthening of the US dollar) have made US bonds a more attractive investment option.

So far the authorities have refrained from the kind of massive stimulus programs China unleashed in response to the global financial crisis in 2008.

There has been some modest but targeted infrastructure investment but concerns about the degree of leverage within the economy, particularly at the local government level, have disciplined the response to the current downturn.

That may be changing. Beijing increased the amount of bonds that local governments can issue this year and had urged the local authorities to issue most of the new “special” bonds by mid-year. The central authorities are reportedly considering authorising another big bout of bond sales – several hundred billion dollars of new debt – for the second half of the year. 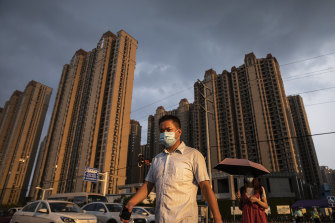 Last year’s crackdown on property developers’ leverage has cut off developers’ access to funding and left a massive number of uncompleted apartments.Credit:Getty Images

The already highly-indebted local governments have been hit hard by the implosions within the property sector – land sales generate much of their revenue – and the initial bond sales were meant to help them stabilise and recapitalise smaller banks within their regions so that they could increase their lending while the new tranches now being considered would fund another round of infrastructure investment.

The People’s Bank of China has been running a relatively conservative approach to monetary policy and isn’t facing the inflationary pressures that confront other major central banks (which is an indication of the weakness of the economy).

Over the weekend, however the PBOC, quoting its governor Yi Gang, said the economy was facing “certain downward pressures” because of the pandemic and external factors and would move to provide stronger economic support.

The external environment isn’t favourable for China. The strongest aspect of its economy has been the recovery in its exports but the high inflation rates and tightening financial conditions are slowing global economic growth and threatening a global recession.

Greater reliance on a domestic economy which is experiencing a property sector crisis that is sending ripples of distress through China’s financial system; which opens and shuts down in response to COVID cases and which is experiencing outflows of foreign capital at rates not seen for many years almost dictates that China will have to open the fiscal and monetary policy spigots if it is to generate a growth rate with a four in front of it this year, let alone the 5.5 per cent target the authorities nominated and still adhere to.