The German president is not welcome in Kyiv. Frank-Walter Steinmeier had been due to travel to the war-torn city yesterday but Volodymyr Zelensky, the Ukrainian president, told him not to bother.

This is partly personal. Steinmeier, who used to be his country’s foreign minister, has long advocated for Western rapprochement with Russia and was one of the main champions of the Nord Stream 2 gas pipeline project. He’s also a friend of Sergei Lavrov, the Russian foreign minister. Enough said.

German Chancellor Olaf Scholz is under increasing pressure to turn away from Russian gas.Credit:AP

But it’s partly political. Germany is coming under increasing pressure from both Ukraine and the global community to go further in its sanctions against Russia. Zelensky has repeatedly singled out Berlin as one of his least reliable allies. Perhaps fear of a frosty reception is one reason why Olaf Scholz, the German chancellor, has not yet travelled to Ukraine. The EU’s largest economy is fast losing moral authority.

Germany has come up with a flurry of reasons why an embargo of Russian oil and gas is a bad idea. Very few of them hold much water. The first is that it won’t end the war (no one is saying it will; the possibility of shortening it would be reason enough). The second is that Russia will simply sell its hydrocarbons to other willing customers (which is actually much harder than it sounds).

The third is that Russia is not getting hard currency and, because of other sanctions, can’t buy much on the global market anyway. This is true up to a point but ignores the fact that the Kremlin’s petro-revenues, in whatever currency, helps it run a current account surplus and prop up the economy.

The fourth is that it will hurt the German economy. There is a fierce debate now raging about whether the cost is too high or a price worth paying. The majority of German economists have calculated that the hit to the country would be far from catastrophic. It’s not even entirely clear it would cause a recession. One study has suggested the cost of a full embargo on Russian oil and gas would amount to between €100 ($146) and €1,000 per person.

Of course, this is not to be underestimated. Such a contraction would represent real hardship for some Germans. However, there are three counter-arguments. The most obvious is that the hardship is nothing compared to that being endured by Ukrainians. How can you compare a few months of belt-tightening for even an hour under bombardment?

What’s more, the German state can afford to reduce the hit by spreading the pain across generations. In common with many countries in the world, German national debt has increased as a result of all the state spending during the COVID pandemic. However, whereas the UK’s debt to GDP rose from 85 per cent in 2019 to 104 per cent last year and France’s climbed from 98 per cent to 116 per cent, Germany’s went from 59 per cent to 73 per cent.

Germany takes pride in its fiscal conservatism but it would be perverse to preserve in this approach when loosening the purse strings might help to shorten a war. Prudence without purpose can look a lot like cupidity.

And it is fair enough for the world to ask Germany to step up to the plate now when so frequently in recent history Berlin has been indirectly dictating how foreign capitals manage their financial affairs. 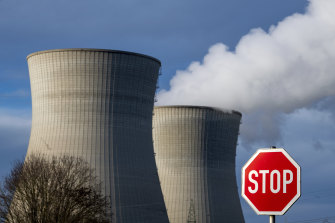 Germany shut down three nuclear power plants at the beginning of January and is planning to close its last three by the end of the year., making it more dependent on Russian gas.Credit:dpa

Between 2009 and 2013, the Greek economy contracted by 21 per cent and unemployment soared to 27 per cent. At the time, Berlin claimed these measures were for the best and designed to prevent the eurozone from imploding.

But if that was an acceptable price for Athens to pay, how can Berlin baulk at a 2.2 per cent hit to German GDP and the loss of 400,000 jobs as a result of turning off Russian gas taps? If southern European countries had to pay the price for their fiscal irresponsibility, how can Germany refuse to accept the consequences of its geopolitical naivety?

Germany’s reticence is all the more galling as it steadfastly chooses to ignore the most obvious solution to its predicament. In a decision that was ridiculous even before Vladimir Putin invaded Ukraine and now frankly beggars belief, Germany shut down three nuclear power plants at the beginning of January (just 103 days ago) and is planning to close its last three by the end of the year.

If Germany goes through with this, it’s going to need even more Russian gas. But if it halts the self-defeating policy and reopens shuttered plants, it will need less. Again, there have been a litany of excuses for why this is not possible.

The Bundestag says turning the country’s nuclear reactors back on will require a change in the law (which is kind of what governments are for). It’s also worried about being able to source enough fuel, spare parts and personnel.

Yes, these are genuine obstacles – but no, they’re not insurmountable. Surely Germany could borrow resources and know-how from other members of the EU, not least France, which have nuclear industries?

The pandemic has provided ample evidence that impressive feats are possible if you put your shoulder to the wheel. Before the pandemic, no mRNA vaccine had ever been licenced for use in humans and Pfizer was producing 200 million doses of various jabs each year. In 2021, the pharma company churned out three billion doses of its COVID mRNA vaccine.

It is ironic that the green part of Germany’s traffic light coalition is putting the brakes on the most obvious way out of the country’s political predicament. Germany’s anti-nuclear movement is long-standing and entrenched. But politicians are paid to navigate the least bad route. At the moment Berlin is giving the strong impression that it is more anti-nuclear than anti-war.

Putin clearly calculated that European reliance on his natural resources would allow him to get away with invading Ukraine. It has fallen to Germany to prove him wrong. If Scholz reopens Germany’s nuclear power stations, turns off the Russian gas taps and heads to Kyiv to tell Zelensky the good news, he’ll receive a hero’s welcome.