The rate of home ownership in Sydney has fallen and the share of home borrowers under financial pressure has more than doubled during the past five years despite a sustained period of record low-interest rates. 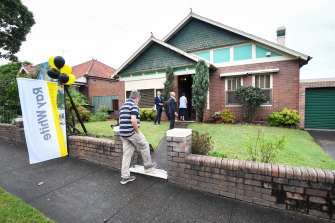 The rate of homeownership in Sydney has fallen the 2021 census shows.Credit:Peter Rae

The 2021 census released on Tuesday showed 61.1 per cent of homes in the city were owned outright or with a mortgage, down 1.1 percentage points since 2016. That compared with a small improvement in the nationwide rate of home ownership which edged half a percentage point higher to 66 per cent.

The growing incidence of mortgage stress came despite a period of very favourable borrowing conditions – official interest rates fell from 1.5 per cent in 2016 to an emergency low 0.1 per cent during the pandemic.

The share of Sydney tenants under financial pressure because of their housing is even higher, with over a third of renters devoting 30 per cent or more of their income to rents.

Social researcher Mark McCrindle said the sharp rise in home borrowers and tenants forking out such a big share of income on housing costs was a “precarious” situation with interest rates on the rise.

“There’s more than twice the proportion in mortgage or rental stress than we had five years ago,” he said.

The census, conducted in August last year, showed the share of renter households in Greater Sydney has climbed to 35.9 per cent, 4 percentage points higher than a decade ago.

Public concern about housing affordability has grown in NSW after several years of rapid property price growth. At the end of March the median price of a detached home in Sydney was just under $1.6 million having risen 21 per cent in the previous year, Domain figures show. Although some indicators suggest prices have eased a little in the past few months.

“Housing is just so expensive that an increasing number of young Sydneysiders can’t afford to buy a home in their own city,” he said.

“Home ownership will continue to fall unless we fix the underlying drivers for why housing is so expensive in the first place. That means fixings land use planning laws and scaling back some [housing-related] tax breaks.”

The share of Sydneysiders who own their own home outright has fallen from 39 per cent to 27.8 per cent since 2001.

The census showed Sydney’s median monthly mortgage repayment grew by $327 between 2016 and 2021 despite very low interest rates during that period.

Home borrowers in the eastern suburbs statistical region had the highest median monthly mortgage repayment of $3298, followed by the Northern Beaches with $3124.

The median annual family income across Greater Sydney was $123,448.

Other Sydney statistical districts with a high share of flats and apartments are the eastern suburbs (58 per cent), inner west (49 per cent) and North Sydney and Hornsby (46 per cent).

Across Greater Sydney 31 per cent of households now live in a flat while 56 per cent occupy a detached house.

Our Breaking News Alert will notify you of significant breaking news when it happens. Get it here.