Kim Farrant was a university student working in Sweden when she realised something about her home country that would spark a pivot in her career.

It was the early 2000s and Adelaide-born Farrant was spending six months working abroad while studying to become a structural engineer. 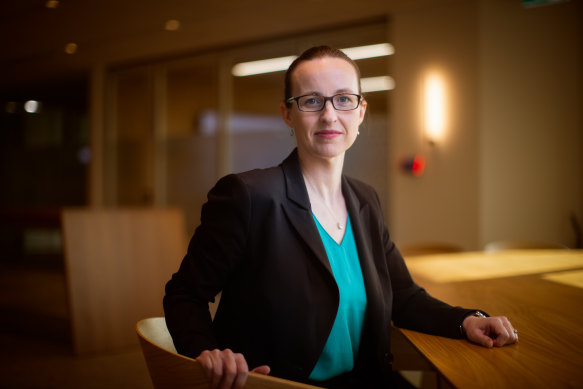 “While I was there, I just saw how far the Nordics were ahead of Australia in terms of their commitment to environmental sustainability,” she says. “And that, I suppose, was a turning point for me, in terms of where I wanted to go.”

Fast forward 20 years, and after heading back to university to study environmental policy at Oxford, the 41-year-old is the head of responsible investment at one of Australia’s biggest industry superannuation funds.

HESTA, a $68 billion super giant, describes itself as a “gutsy advocate driving meaningful change” and represents almost one million members working in healthcare and community services.

The super fund made ripples several months ago when it declared it would use its small stake in AGL to side with tech billionaire Mike Cannon-Brookes and vote against the planned demerger of the energy company’s coal-fired power generation business, arguing the move would not help decarbonisation of the economy.

Chief executive Debbie Blakey described the move as a “watershed” moment for responsible investment, as some large investors shun divestment and embrace active ownership so they can influence the activities or behaviour of companies.

The episode reignited discussion about the role of investing with environmental, social and governance (ESG) principles – a discussion Farrant has been having for almost two decades.

Farrant started examining these issues in the UK in 2005, researching the role of engagement and proxy voting in holding companies accountable. In the same year, the UN’s Principles for Responsible Investment were created by then secretary-general Kofi Annan and some of the world’s largest institutional investors.

Since then, investing within an ESG framework has well and truly entered the mainstream.

“I left Australia and no one was talking about climate change. And I returned, and it was really just as the first set of climate change legislation was coming in,” she said.

“There were a lot of funds who were starting to do work in this space, but really, it was still at that very early stage. And so it was a small portion of what I did really alongside work on climate change on sustainability more broadly.

“It hadn’t grown to anywhere near the size that it has today.”

Farrant, who lives in Melbourne with her husband and two children, moved into superannuation in 2017, taking a role with VicSuper before moving to Hostplus, and then onto HESTA mid-last year. Her role, reporting to chief investment officer Sonya Sawtell-Rickson, was a new one for the company, indicative of its goal to be a leader in responsible investment.

HESTA’s involvement with the campaign against AGL’s demerger also highlighted the increasing influence of the rapidly growing $3.3 trillion superannuation industry.

Farrant says as a large asset owner with over $68 billion in funds under management, HESTA’s scale means it can and should push for change, with active ownership a central part of how they manage ESG risks.

“When we think about AGL, I think really the effectiveness of our active ownership approach was sort of demonstrated through that, where we were able to step up and to make our views known,” she says.

“And I suppose thinking about AGL, really regardless of whether HESTA owns AGL, it is one of Australia’s electricity generators. Its emissions from coal-fired power flow right throughout the entire economy, but right throughout our entire portfolio as well. And really, that’s why we use our share voting and engagement to push companies to appropriately manage climate change.”

Farrant says there is a noticeable shift in the way companies are engaging with big investors, with an increase in literacy around what ESG means, why it’s important, and what is expected.

The next frontier for ESG is biodiversity, she says, which is particularly important for Australia. The latest State of the Environment report, released in July, found that Australia has suffered catastrophic losses of wildlife and habitat.

“That report highlighted that current levels of investment have been unable to slow the decline in the state of Australia’s environment, and certainly that Australia has one of the worst records when it comes to biodiversity loss,” says Farrant. “It certainly is a global issue, but there are local specifics, and certainly Australia does face some particularly challenging risks with respect biodiversity and natural capital.”

At its core, superannuation funds are focused on delivering returns to their members, and despite scepticism that ESG-aligned funds miss out when compared to mainstream options, a KPMG study found this has been debunked even during COVID-19 volatility.

However, recent rocky markets have resulted in a turbulent year for investors across the board, including super funds, many of which have posted negative returns for the first time since the GFC. HESTA’s sustainable growth option posted an annual return of -4.1 per cent.

But, like most super fund executives, Farrant is urging members to look long-term, pointing to the sustainable growth fund’s average of 10.78 per cent over a 10-year period.

“Certainly within some of the sustainable growth options there can be greater concentrations than is the case across maybe some other MySuper options,” she says. “But our expectation is that over the long term, that those options and particularly our sustainable growth option, we expect that it will continue to deliver good strong long-term performance.”

Despite some bumps, Farrant is confident ESG investing will continue to become more important.

“We’ve seen both enormous take up by not just the superannuation funds, but particularly over the last few years, greater responsiveness from investment managers. We’ve seen growth within the responsible investment teams of organisations, growth within the sustainability teams that companies have to address these issues as well,” she says.

“And certainly, it’s been positive to see the way increasingly that responsible investment and sustainability really has been incorporated into core business.”