If you care about Australia’s future, care about declining home ownership

The most thought-provoking contribution I’ve heard so far in this utterly dumbed-down election campaign is from barrister Gray Connolly, saying the big issue we should be debating is housing and intergenerational wealth.

Connolly was speaking as a self-proclaimed Red Tory, on ABC Radio National’s Religion and Ethics Report. Red Tories, he says, are people on the political Right who have a more traditional view of what we’re trying to achieve. They are true conservatives, trying to conserve the institutions and practices that have given us the way of life we value. 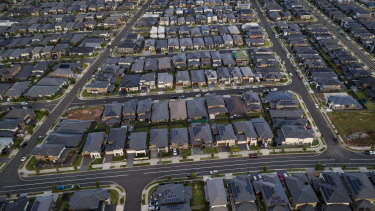 We risk striping away the Australian way of life if we create a society where young people can’t afford housing. Credit:Wolter Peeters

Red Tories believe in communitarianism – much more about “we” than “me”. They highlight the virtues of home and family. They emphasise the boring virtues, like duty, perseverance and loyalty, not just people’s rights.

That so few Australians under 40 have any form of home ownership or wealth of any kind is a ticking timebomb socially, Connolly says. It’s this that could split the country demographically.

“I cannot believe how little work either side of politics has done on the housing issue. It’s an absolute disgrace that the Coalition, on the Right of politics, for whom home ownership is usually something very important, has done so little to promote home ownership among young people.

“I cannot believe that so many people on the Right of politics do not get this,” he says.

How do the economic policies of recent decades adversely affect traditional conservative values?

“For the better part of 20 years, nothing has been done other than pour fuel on the housing-price fire,” he says. This has continued even to the point of not looking after renters, not looking after people with insecure work.

It has delayed coupling and family formation for most people. “If you don’t have secure work, chances are you’re not going to form a family because chances are you cannot afford a home.”

If you have housing that is so expensive, then you have young people moving away from where their parents are. You have the family bond dissolve, he says.

But because “the market” and government policy mean we don’t “prioritise residential housing for actual residence, but for investment, you have the absolute social disaster where these bonds are being split apart.”

Does it surprise you to hear anyone on the Right accepting that insecure work is a major social problem? Though the Red Tory label is a recent British invention, Connolly traces its origins back to the mid-19th century and Benjamin Disraeli.

Then, then the Conservatives saw the trade union movement as a necessary counterbalance to the “viciousness and brutality of Manchester liberalism,” Connolly says. (Manchester would have been seen as centre of the dark satanic mills.)

Connolly says Red Tories accept the role of the state as protector of the nation, but also of the family and the family structure. They see the state as being useful for achieving bigger projects for the national good.

Phillip Bond, instigator of Britain’s Red Tory revival, says the market has a tendency to devour its host society. Connolly says this is a very dangerous tendency and that’s where the state comes in.

Corporations are creatures of statute, and what statutes make they can unmake and can regulate, he says. So rather than fearing the state is too powerful, “I am much more scared of the state that’s too reluctant to bring corporations to heel”.

A corporation has no special rights in society any more than any other group does. The state is meant to protect the rights that people need to be protected. We should be conserving society and the community and serving the weakest and the hurt, he concludes.

I think there’s much sense in what Connolly says, and not just about the high social price we’ll pay for making too many jobs insecure and homes too hard for too many young people to afford. We’ll damage the Australian way of life.

The economy is all of us. It belongs to all of us, not just a few big corporations. It must be the servant of our society. Governments’ job is to ensure the economy improves our way of life and doesn’t diminish it.