It’s the Coronacession: We’re closing down the economy, under doctors’ orders

It’s now clear that we – like most countries – are already in a recession that promises to be long and severe. It will be a recession unlike any we’ve previously experienced. Why? Because it’s happening under doctors’ orders. So it deserves a unique name: the coronacession.

It’s taken a few weeks for this to become obvious, mainly because economists don’t know much about epidemiology and it’s taken the nation’s medical experts until now to make clear that their preferred response to the virus will take months to work and involve closing down much of the economy.

We already know that real gross domestic product is likely to contract in the present March quarter and it’s now clear that last week’s $17.6 billion stimulus package is unlikely to fully counteract the fall in economic activity – production and consumption – during the imminent June quarter, brought about by the government’s measures to impose “social distancing” and encourage “self-isolation”. 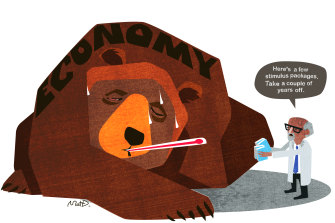 This recession is one the doctor ordered.Credit:Matt Davidson

Since the medical authorities are only now suggesting that these efforts to slow the spread of the virus may need to continue for six months – which, considering their bedside-manner efforts to break it to us gently, may well prove an underestimate – it won’t be surprising if the economy also contracts in September quarter.

Of course, Sunday’s further stimulus package has been designed to offset the loss of wages and profits that will arise from pretty much closing the economy down, but I’m sure the government and its econocrats realise we’re long past the stage of pretending that avoiding two successive quarters of “negative growth” means avoiding recession.

It’s the business closures, falling employment and rising unemployment and underemployment that characterise a recession – and are the reason why, in normal times, governments and central bankers try so hard to prevent them, not bring them about.

Once these developments fill the headlines, what happens to GDP each quarter will be of only academic interest.

To fill out Cormann’s cryptic description of what is coming, many businesses will close their doors – some temporarily, some for good – partly because the government has cut off their access to customers (the airlines, inbound tourism, sporting, arts and entertainment events) and also because it has encouraged people to stay at home, minimising travel, trips to supermarkets and shopping centres and visits to restaurants, pubs, cafes and coffee shops.

The many people working or studying from home can be expected to spend less than they normally would.

The nation’s income from exports will fall, particularly because of the government’s bans on the entry of foreign tourists and students. The recessions in other countries will reduce their demand of many of our other exports.

Of course, our recession will reduce our demand for imported goods and services (we won’t be taking overseas holidays for the foreseeable, for instance) and, in some cases, parts and goods we need to import won’t be available until Chinese factories are fully back to work and have caught up with their backlog.

As businesses find they have few or no customers, they will seek to wind back their activities, leading many to stand down staff or make them redundant. Casual workers will discover there are a lot fewer or no shifts for which their services are required.

You see from all this that – although the virus came to us from overseas, and although so many other countries are in the same position as us that there’s a world recession – it’s not the rest of the world that’s dragging us down. No, it’s our decision to seek to minimise the number of deaths from the virus by slowing down its spread through the population, and doing so by closing down much of our economy for months on end.

The more the government skimps on the cost of cushioning the effects of its own decision to shut down much of the economy, the deeper and more protracted the recession will be.

As is their practice, our medicos have focused on saving lives and protecting our health, and haven’t worried too much about what their medicine would cost, or who’d be paying for it.

You and I will be paying the cost – with those who lose their jobs paying a mighty lot more than the rest of us – and it will be the responsibility of the government, advised by its econocrats, to do everything it can to minimise that cost and spread the burden fairly.

How? By spending big. How big? Not last week’s $17.6 billion, more like $176 billion. The second stimulus package we see on Sunday will be just another instalment.

This will blow the federal budget out of the water. It will be hit in two ways: not just by the extra spending and tax cuts the government chooses to make, but also by the simple fact that businesses and individuals who earn less income pay less income tax. Workers who lose their jobs not only cease paying any income tax, they have to be paid unemployment benefits.

But here’s the trick: the more the government skimps on the cost of cushioning the effects of its own decision to shut down much of the economy, the deeper and more protracted the recession will be and the longer it will take to get the economy back to running normally once the threat from the virus has passed.

Paradoxically, that means the more you skimp on the cost to the budget, the bigger the deficit you end up with, and the further off into the future the return to surplus becomes.

The measures announced on Thursday by the Reserve Bank, particularly the cheap funding to banks for loans to small businesses, will help a little, but the game is pretty much over for the Reserve and its “monetary policy”. From now on, everything turns on what Scott Morrison does with his budget.