I can’t remember a time when the arguments of all those bank and business economists claiming “the inflation genie is well and truly out of the bottle” and demanding the Reserve Bank raise interest rates immediately and repeatedly have been so unconvincing.

At base, their problem is their unstated assumption that the era of globalisation means all the advanced economies have identical problems for the same reasons and at the same time. 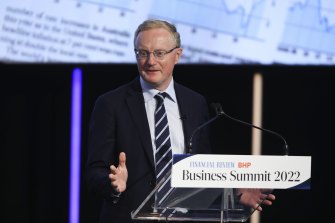 If America has runaway inflation because successive presidents have applied budgetary stimulus worth a massive 25 per cent of gross domestic product at the same time as millions of workers have withdrawn from the workforce, Britain’s withdrawal from the European Union is causing havoc, and Europe’s problem is particularly acute because of its dependence on Russian oil and gas, we must be the same.

Business economists have put most of their energy into convincing themselves our problem is the same as everyone else’s, rather than thinking hard about how our circumstances differ from theirs and how that should affect the way we respond.

There’s also been a panicked response to a huge number – inflation of 5 per cent! – that says, “don’t think about what caused it, just act”. And since every other central bank has already started raising rates, what’s wrong with our stupid Reserve Bank?

Too many economists have switched their brains to automatic pilot. We know from our experience of the 1970s and ’80s how inflationary episodes arise – from excessive demand and soaring wages – and we know the only answer is to jack up interest rates until you accidentally put the economy into recession. You have to get unemployment back up.

That stereotype doesn’t fit the peculiar circumstances behind this rise in prices, nor does it fit the way globalisation, skill-biased technological change, the deregulation of centralised wage-fixing and the huge decline in union membership have stripped employees of their former bargaining power.

The first thing to understand is that our price rises have come predominantly from shocks to supply: the various supply-chain disruptions caused by the pandemic, the war on Ukraine’s effect on oil and gas prices, and climate change’s effect on meat prices.

Various economists are arguing that price rises have been “broadly based” so as to show that price rises are now “demand-driven”, but the main reason so many prices have risen is that there have been so many different supply shocks coming at the same time, with so many indirect effects, ranging from transport costs to fertiliser and food.

Two thirds of the quarterly increase in prices came from four items. In order of effect on the index: cost of new dwellings (up 5.7 per cent), fuel prices (11 per cent), university fees (6.3 per cent) and food (2.8 per cent).

Of those, only new dwelling prices can be attributed mainly to strong demand, coming from the now-ended HomeBuilder stimulus measure. The rise in uni fees was a decision of the Morrison government.

America’s economy is “overheating”, but ours isn’t. It’s true our jobs market is very tight, and that much of this strength is owed to our now-discontinued stimulus measures.

But, paradoxically, the economics profession’s ideological commitment to growth by immigration has blinded it to the obvious: job vacancies are at record levels also because of another pandemic-related supply constraint: our economy has been closed to all imported labour (and we even sent a fair bit of it back home). This constraint has already been lifted.

The thing about supply shocks is that they’re once-only and not permanent. So, left to its own devices, without further shocks the rate of price increase should fall back over time. Petrol and diesel prices, for instance, have already fallen a bit but, in any case, won’t keep rising by 35 per cent a year year-after-year. 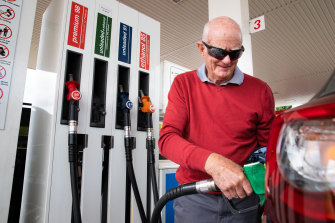 Petrol prices have started to come off a bit.Credit:Jason South

It’s sloppy thinking to think a rise in prices equals inflation. The public can be forgiven such a basic error, but professional economists can’t. A true inflation problem arises only when the rise in prices is generalised and is ongoing. That is, when it’s kept going by a wage-price spiral.

When a huge rise in prices, from whatever source, leads to an equally huge – or huger – rise in wages, which prompts a further round of price rises. That’s inflation.

In their panic, business economists have assumed that the loss of employee bargaining power we’ve observed in most of the years since the global financial crisis, which has done so much to confound the econocrats’ wage and growth forecasts, and caused inflation to fall short of the Reserve’s target range for six years in a row, has suddenly been transformed. Union militance is back!

Really? I’m sure employees and what remains of their unions will be asking for pay rises of at least 5 per cent this year, but how many will get anything like that much? They’ll all be on strike until they do, you reckon?

They’re safe to get more than the 2.3 per cent they got in the year to December, according to the wage price index, but the greatest likelihood is that real wages will continue to fall. And the cure for that is to raise interest rates, is it?

It is true that, if wages rose in line with prices, we would have an inflation problem, but how likely is that?

All the sabre-rattling we’ve seen by the top retailers and their employer-equivalent of union bosses – so breathlessly reported by the media – suggests they’re increasingly confident they can get away with big price rises. But how much success individual employees and unionised workers have in realising their expectations remains to be seen.

Perhaps in this more inflation-conscious environment, employers will be a lot more generous – more caring and sharing – than they have been in the past decade. Perhaps.

The Reserve is under immense pressure from the financial markets, the bank and business economists, the media, the actions of other central banks and even the International Monetary Fund to start raising interest rates.

It will, with little delay. It must be seen to act. But whether it’s at panic stations with the media and the business economists is doubtful. And you don’t have to believe the inflation genie is out of the bottle to see that the need for interest rates to be at near-zero emergency levels has passed.

As BetaShares’ David Bassanese has predicted, the Reserve will be “not actively trying to slow the economy, but rather [will] begin the process of interest-rate normalisation now that the COVID emergency has passed”. Moving to “quantitative tightening” will be part of that process.

Ross Gittins is the economics editor