Reserve Bank charts path to higher interest rates, but there may be potholes ahead

The Reserve Bank doesn’t want to send Australians broke as it hikes rates, but it would like us to feel a little less well off.

It thinks we’ll largely be able to cope as it traverses the “narrow road” – as governor Philip Lowe said recently – back to a normal cash rate and lower inflation. 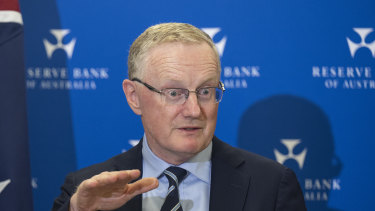 That narrow road is the path to returning the official cash rate to a more normal level of about 2.5 per cent fairly quickly and getting inflation back under control (ideally between 2-3 per cent), all without grinding the economy to a halt. It’s tricky, and that’s not counting what we can’t see coming around the bend.

One of the things the Reserve Bank is happy to see is a fall in house prices. While the bank isn’t targeting house prices directly, higher interest rates tend to mean home buyers aren’t as willing to pay top dollar, so those markets start to ease.

As prices fall, fewer homes go on the market. That market slowdown has already taken effect in Sydney and Melbourne, with fewer properties going up for auction and homes spending a bit more time on the market before being purchased.

That means all the spending that comes with buying and selling houses also slows down. People might delay buying a new couch until they decide the time is right to move. Perhaps it means putting off a larger landscaping job, and fewer trips to Bunnings, if the home they’re selling is no longer worth as much. It also means mortgage holders can potentially borrow less against their home, so plans for a kitchen renovation or new family car are put on ice.

These changes don’t just affect the people buying or selling. Real estate agents will get fewer and smaller commissions, and the tradies who would have been hired for all the home extensions or moving in touch-ups like painting will also have less work. These groups will then have less money to spend out and about.

Now, there have been plenty of news stories, including by me, about the people who will feel it most – those who bought during the pandemic, when interest rates were at their lowest on record.

The Reserve Bank is certainly keeping an eye on those people, but for the most part the bank has faith that lenders did their due diligence and made sure any prospective borrower could cope with rate hikes. It’s also worth pointing out house prices are only expected to fall back to early pandemic levels, so most people won’t feel much of a sting.

That all sounds fine in theory. But to stretch Lowe’s metaphor, the Reserve Bank hasn’t been on a path quite like this one before, and there’s the potential for unexpected potholes around the corner.

We’ve got inflation at a 20-year-high, unemployment at a near-50 year low, and the workforce participation rate is at record levels. Yes, essentials have become more expensive, and consumer confidence is low, but that doesn’t seem to match our consumption as we continue to spend at a healthy rate. At the same time, Australians saved a whopping amount during the pandemic (to the tune of $250 billion).

We also seem eager to keep the savings up: despite high inflation, in the three months to March Australians were saving on average 11 per cent of their income, the ABS says – more than double the amount we were putting aside before the pandemic started.

The Reserve Bank isn’t quite sure what Australians will do here. If people keep saving and cut down on spending elsewhere that would be OK, but there’s a good chance we all keep merrily spending and just save a bit less.

So rather than being worried about the “r” word – recession – some economists and the Reserve Bank are more concerned about the “o” word: overheating.

There’s a risk that if buyers don’t slow down the spending frenzy, businesses will be happier to pass on their higher costs to those consumers permanently, and the economy will continue to barrel on at its rapid pace.

The bank hopes most of the global supply issues will start to ease and that will take some pressure off, but as the last two and a half years have shown us, anything can happen.

Potential potholes on the path are future lockdowns in China, twists in the Russian-Ukraine conflict, and wild variants of coronavirus. And they’re only the known unknowns.

The Reserve Bank is trying not to crash the economy as it gets interest rates back to normal levels quickly. For now, it’s banking on the evidence it has that Australian households and businesses are in a strong enough position to be able to hang on for the ride.