It is often said that student debt is the cheapest you will get, and that it can be incurred and almost forgotten.

However, HECS-HELP debts are getting bigger and are taking longer to pay off as course fees for higher education and training rise. And outstanding student loan balances have just become larger, after being super-sized by surging inflation. 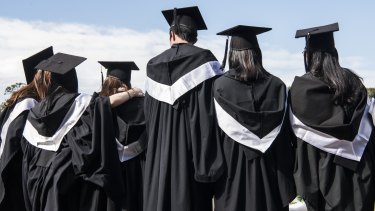 The average student debt ballooned by almost $1000 this June.Credit:Steven Siewert

Each year the federal government indexes HECS-HELP debt in line with the inflation rate.

As almost everyone knows, the cost of living is on the rise and inflation is fast gathering pace. It means those with student debt need to take far more notice of their outstanding loan balance; otherwise it could compound quickly.

However, with the inflation rate forecast to remain elevated, student debts are likely to also keep growing at a rapid pace.

HECS-HELP repayments are not required until a person reaches annual income of $47,014 a year. The percentage payable increases as your income increases, so the more you earn, the higher your repayment will be.

The Australian Taxation Office calculates compulsory repayments each year and includes it on your income tax notice of assessment. That means that it happens automatically, so it is usually hardly noticed by those repaying it.

A basic financial rule of thumb is to pay off debts with the highest interest rates first, such as personal loans and credit cards, that can have rates in the high single-digits, or more. When those debts are repaid, you generally move onto the next highest-rate debt.

Even with the relatively high indexation applied to student debt – and maybe even higher next financial year – you would still be better off repaying debts that are accruing high-interest rates first, rather than student debt

Although voluntary repayments on student debt can be made at any time, whether to make voluntary payments depends on the personal circumstances of each debt holder.

Jessica Brady, financial adviser at Fox and Hare, says COVID-19 job losses, particularly among young workers, was an important reminder of the value of maintaining a “just in case” cash buffer.

She believes even if a higher than usual HECS-HELP debt indexation rate continues, there is still no real urgency to pay it off via voluntary payments.

Most student debt, although growing, is relatively small. And many young people have better uses for their money, such as buying a home, she says.

“It is good debt, as you are investing in yourself and that leads to more career and income opportunities,” Brady says.