Tax cuts are no magic bullet but are worth doing anyway

Tax cuts look set to be the centrepiece of next Tuesday’s federal budget. Should they be?

You'll no doubt have heard that the tax cuts – which admittedly no one outside the senior ranks of government and the federal bureaucracy have seen – are unfair, unaffordable and not the most effective form of stimulus to combat a pandemic. 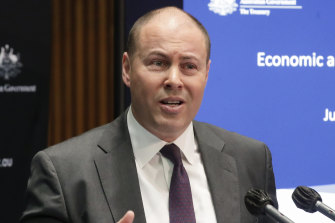 Treasurer Josh Frydenberg has indicated tax cuts and business investment incentives will be considered in the October budget.Credit:Alex Ellinghausen

It's certainly true that there are more direct ways of stimulating an economy than broad-based tax cuts, such as targeted one-off cash grants or boosts to welfare payments.

But when it comes to tax cuts in this budget, it's not an either/or proposition. This is an AND budget. Tax cuts AND infrastructure AND investment incentives AND other spending.

It's entirely possible to have tax cuts as part of an all-singing, all-dancing stimulus budget, which is what we're likely to get.

Of course, the problem with tax cuts as a stimulus measure is that some portion is likely to be saved, not spent.

If taxes are cut by a total of, say, $20 billion in one year, that's $20 billion more money sitting in the pockets and bank accounts of Australians, rather than in government coffers.

What they then choose to do with that money – to save it or spend it – is entirely a choice for individual households.

But it's wrong to assume some portion of tax savings directed to higher income earners won’t also be spent. Sure, some may simply pocket their tax saving, but there's nothing about the appearance of rich people to suggest they don’t also enjoy spending a bit of money.

And even if saved, tax cuts help households restore their savings buffer to a level at which they will feel comfortable to spend again.

So, while they may not be the most direct form of stimulus, tax cuts definitely do deliver a boost to the economy.

But are they fair?

It's true that the first stage of the Coalition’s seven-year tax plan, introduced in the middle of last year, delivered the biggest savings to low- and middle-income households. 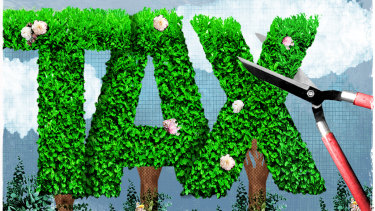 Australia's top 20 per cent of taxpayers will contribute 60.2 per cent under the plan, up from 58.3 per cent without the plan.

In dollar terms, high-income earners certainly get the biggest tax cuts, from stage three in particular. But proportionally, the burden of the tax system remains largely unchanged. Huh.

You could argue, of course, that the plan is a missed opportunity to make the tax system markedly more progressive. Particularly at a time when low-income earners are being hammered by job losses. But it's not true to argue the tax cuts make our system more regressive. They don't.

There are times to die in a ditch over advancing fairness in the system, and there are times to simply get on with a plan to deliver a broad-based package of tax cuts which leaves the progressive nature of Australia’s tax system largely unchanged.

Can we afford them, though?

Already, the Coalition government is on course to deliver the biggest shake-up of Australia’s personal income tax system in many a decade.

How much of that plan will be brought forward in this budget, we won't know until Tuesday.

But remember, the decades-long cost of the entire package is already baked into the budget, just starting from 2024, not now. Bringing forward by a couple of years the time at which the lower rates start to apply does not alter the longer term cost to the budget of those cuts. It just provides a bigger boost to the economy in those interceding years – precisely the time we need an extra boost, thanks to the coronavirus.

Those arguing against the tax cuts are actually arguing that stimulus measures already in place for down the track should be withdrawn – an idea which seems reckless at best.

Tax cuts do work to stimulate the economy. These ones are fair enough. And we can't afford not to get cracking with them.

Jessica Irvine is a regular columnist.