The damage to New York’s economy may be irreparable

Manhattan's Fifth Avenue has long been one of the world's most desirable shopping destinations. "Millionaire's Row" had come to be synonymous with New York City's growing prosperity and global cache. 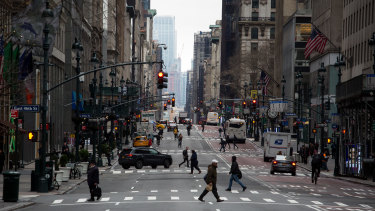 Manhattan’s Fifth Avenue has long been one of the world’s most desirable shopping destinations. But the streets are much emptier these days. Credit:Bloomberg

New York's non-essential businesses were forced to shut up shop when the city locked down in March to contain the spread of coronavirus, but many never opened back up. They had hoped to weather the storm but in a matter of five months, the landscape changed dramatically. Some now fear the damage done may be irreparable.

Gone are the tourists and wealthy residents who had patronised the high-end stores. The former have keenly avoided travel to the US, while the latter have hunkered down upstate and further afield.

"Everything that made New York so distinctively New York has gone: its shopping, its Broadway theatres, its all-night cafes and late-night bars," laments Manhattanite and fashion buyer Natasha Field.

Retailers say the Big Apple, which has seen one of the country's longest and strictest shutdowns, has become the worst city in America to do business. They report foot traffic at Manhattan stores down 85 per cent from a year ago and do not see prospects improving soon. Valentino, which is suing to get out of its lease on Fifth Avenue, claimed in a recent court filing that the location was no longer workable as a luxury destination and the situation was unlikely to change "even in a post-pandemic New York City, should such a day arrive".

Nearly 3000 small businesses have closed for good in the past four months. The century-old New York Daily News tabloid was recently forced to shut its newsroom at Penn Plaza. Citing the pandemic, the company said the paper would continue to publish but it was evaluating "real estate needs".

Restaurants too have suffered as indoor dining remains some way off in New York, which has recorded more than 32,000 deaths. Some have followed customers out to the Long Island shores. Michael Weinstein, the chief executive of Ark Restaurants, which was forced to close three of its five Manhattan diners, said he would never open another restaurant in New York. "There's no reason to do business in New York," Weinstein said. "I can do the same volume in Florida in the same square feet as I would have in New York, with my expenses being much less."

Part of the problem is that fewer than 15 per cent of workers have returned to their offices. Surveys suggest many will continue to work from home through to 2021.

Entire blocks of the well-heeled Upper East Side have been left virtually empty. Many of its residents cannot justify the steep city taxes – the highest in the US – when they are receiving much less in return.

Tom Harper, 32, moved out of the neighbourhood to Vermont in May after his partner lost a job as an usher in one of Broadway's theatres and they could no longer afford their exorbitant rent.

"We tried for a while at the beginning, unable to bring ourselves to leave the place we had dreamed of living for so long," he said.

"But when was the last time I went to a club, concert, great restaurant? I asked myself. What is New York without any of those things? Not much, quite frankly."

According to moving company United Van Lines, Harper is not alone. Marc Rogers, its chief executive, said it had helped relocate hundreds out of the city to the Hamptons, Hudson Valley, neighbouring Connecticut and Vermont in recent months.

According to Rogers, the majority – 60 per cent – belong to higher-income brackets earning more than $US100,000.

Figures released this week by United Van Lines showed people flooding out of the Empire State during the pandemic, as 67 per cent of all long-distance moves were made by those leaving and only 33 per cent were by people moving in.

According to a report from New World Wealth and Webster Pacific, the combined wealth in the Big Apple fell by $US336 billion in the 12 months ending June 30.

Tax collections dropped 46 per cent in June, even while revenues generated in other parts of the state recovered. Politicians have proposed a wealth tax targeting the city's registered 100 billionaires to help fill an enormous shortfall. However, governor Andrew Cuomo said he could not support greater taxes on the ultra-wealthy as rich people already have one foot out of New York City and he fears they will leave for good if their taxes go up.

Last month, he issued a plea for the super-rich to return. "They are in their Hamptons homes, or Hudson Valley or Connecticut. I talk to them literally every day. I say, 'when are you coming back? I'll buy you a drink. I'll cook'," he said.

But the governor has little more than that to offer to lure them back. Harper, a publisher, said he may never return to New York and if he ever does, it won't be to Manhattan: "I think the virus has just reframed people's relationship with the city. Maybe it will never be repaired, and that's not necessarily a bad thing."

Related posts:
Hot News
Trump Says He Expects to Nominate Ginsburg Replacement Next Week
John Turner, Who Was Briefly Canada’s Prime Minister, Dies
Susan Collins says she opposes voting on SCOTUS nominee before election
Judge Napolitano on Ruth Bader Ginsburg's Supreme Court replacement in an election year
US to restrict access to TikTok and WeChat
The physician accused of performing unwanted hysterectomies in an ICE detention center is not a board certified OB-GYN
The pandemic is driving millions of America's 'working poor' to the edge
Recent Posts
This website uses cookies to improve your user experience and to provide you with advertisements that are relevant to your interests. By continuing to browse the site you are agreeing to our use of cookies.Ok