Xia Haijun was long considered the closest associate of China Evergrande Group founder Hui Ka Yan. He accompanied Hui for a Harvard University visit in 2018, bought company bonds to boost market confidence and was the one sent to Hong Kong last year to discuss the developer’s asset sales.

All told, Xia was a valued member of the Evergrande family. And his salary showed it: He earned more than $US460 million ($658 million) since 2009. 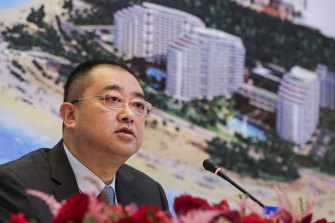 Xia’s sudden ouster makes him the most high-profile executive to fall since China’s property crisis kicked off at Evergrande in 2020.Credit:Getty Images

That all changed last week, when the chief executive officer was forced to resign after an investigation showed he was involved in arranging undisclosed loan guarantees that threatened to wipe out about $US2 billion of corporate deposits. It came as Evergrande, the world’s most indebted developer, is preparing to present a restructuring plan by the end of this month.

Xia’s sudden ouster makes him the most high-profile executive to fall since China’s property crisis kicked off at Evergrande in 2020. While his downfall may reflect an attempt by the developer to rebuild investor confidence, the company has so far failed to assuage concerns about its corporate governance and capacity to pull off what’s likely to be one of the most complicated restructurings in history.

That scepticism is increasingly spreading across much of the industry: A Bloomberg index of Chinese property stocks has tumbled more than 25 per cent since mid-April, while yields on many developer bonds are trading at distressed levels.

“There are still huge challenges and uncertainties ahead for the new executives,” said Kenny Wen, head of investment strategy at KGI Asia in Hong Kong. “They need to resolve all the historical debt problems, and China’s real estate industry needs a better regulatory environment for it to grow again.”

Xia, a Canadian citizen with a doctorate in industrial economy from Jinan University, joined Evergrande in June 2007 as CEO after working at subsidiaries of state-owned investment firm Citic Group Corp. for 13 years.

At Evergrande, the native of the northeastern Chinese city of Harbin had full charge of the daily operations, including its financial and capital transactions, management and legal affairs. He started to lead the company’s interim results presentations in 2016, becoming an important figure for global investors and the media.

Xia’s compensation was so lucrative that he quickly earned himself the nickname “emperor of workers” in Chinese media. Since 2009, when Evergrande went public and started disclosing executive pay, he collected more than $US210 million in salary, plus another $US250 million from exercising options and selling stock, according to Bloomberg calculations.

When the property crisis escalated last year, Xia sold all his remaining dollar bonds, including the ones he bought in 2020 to help shore up sentiment. He lost about $US73 million from the sale of three debentures, an analysis of filings showed. He disclosed the trades about half a year later, sparking compliance concerns. Those bonds now trade at less than 1/10th of their face value. 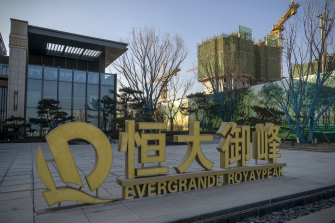 Evergrande’s restructuring plan is due soon.Credit:Bloomberg

As of the latest disclosure in September, Xia still held about 35 million Evergrande shares under its options plan and stakes in its property-management and electric-vehicle units worth about $US20 million combined.

Xia’s downfall came unexpectedly in a statement last week. Evergrande said he, along with Chief Financial Officer Pan Darong and an executive president at the company’s mainland division, helped arrange 13.4 billion yuan ($2.8 billion) of pledges provided by the property-services unit to help third parties obtain bank loans. While part of the funds were transferred back to Evergrande indirectly, the borrowers failed to repay the debt, resulting in the enforcement of the deposit guarantee.

As a result, the builder said it’s considering appointing a consultant to conduct a comprehensive review of the firm’s internal control and risk management.

Shawn Siu, who replaced Xia, joined Evergrande in November 2013. He holds a bachelor’s degree in arts from Beijing Normal University and completed a postgraduate program in economic law at the Southwest University of Political Science and Law in the central Chinese city of Chongqing. Most recently, he was an executive director at Evergrande and chairman of its electric-car unit.

His salary last year: 15,000 yuan a month. The company didn’t provide details about his compensation with his latest promotion.

Now all eyes are on Evergrande’s restructuring plan that’s due in the coming days. Siu told the local media last week that the company has reached a basic consensus with some global creditors and that it will explore a law-compliant solution to recover the funds seized for the pledges.

The developer, whose shares have been halted since March in Hong Kong, has failed to deliver its latest earnings reports, leaving investors largely blind when it comes to its financial situation.