The world is partying hard on free money, but beware the hangover

Australia saw its first sale of a diamond for a million dollars last month. A week later art auctions set record high prices for 16 artists. One of those, $3.1 million for Arthur Streeton’s Grand Canal, also happened to set a record for the highest bid made by internet.

That week took the total value of Australia’s fine art auctions so far this year to 37 per cent more than for the same period in the last pre-COVID year, 2019. “The market has been exceptionally strong around the world in all categories for eight months now,” the director of one of the auction houses, Merryn Schriever of Bonhams Australia, told The Financial Review. 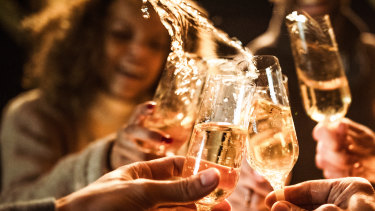 Asset prices are soaring on the back of record low or no interest rates worldwide. Credit:Getty

And we know that Australia’s real estate market is ridiculously overheated, but it’s not alone. Last year, while the world economy shrank by 3 per cent, house prices increased by an average 5 per cent across the 16 developed countries measured by the Federal Reserve Bank of Dallas. In the midst of a pandemic.

In New Zealand, house prices soared by 21 per cent in the year to the end of February, prompting Prime Minister Jacinda Ardern to call it a “dangerous housing bubble”. Her government announced the end of tax deductibility for mortgage interest by investors and told the Reserve Bank of NZ it had to start worrying about real estate prices in setting interest rates.

It’s not only tangible assets like art and jewels and real estate. The market for “virtual assets” is running hot too. The value of all cryptocurrencies, including Bitcoin and the rest, this month reached $US2.4 trillion ($3 trillion), eclipsing the value of all US dollars in circulation, according to the information provider CoinDesk.

World share market benchmarks are around their all-time highs even as the total number of COVID cases continues to accelerate and new variants emerge to challenge existing vaccines. Australia’s share market hit a record high on Monday. 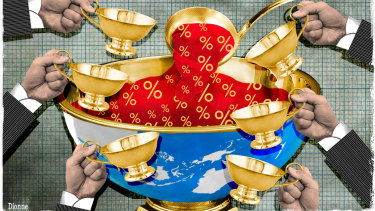 Governments have been able to borrow much of this money very cheaply thanks to the free money their central banks have been pumping out. This borrowing means that aggregate public debt reached an “unprecedented” 97 per cent of world GDP last year and will rise to 99 per cent this year, says the IMF.

In the US alone, President Joe Biden is asking Congress to approve another $US4 trillion in spending on top of the $2 trillion he’d already won from the legislature.

All this liquidity and debt has cured investors of their fear of plague and pestilence, but it’s given rise to a new fear. Until February, big institutional investors consistently told the monthly Bank of America survey that their main fear was the disruptive risk of COVID. In March, for the first time since the advent of the coronavirus, the No. 1 fear cited was inflation, and No. 2 was higher bond yields. The two are intertwined.

Street inflation, the sort of inflation that affects peoples’ shopping and utility bills, has been quiescent in the rich world since the 1980s. The hot debate among economists now is whether it’s about to return.

All the stimulus spending is heating up demand for goods and for workers, pushing up prices. Commodity prices, for everything from copper to timber, iron ore to food, are rising. There are labour shortages in some rich countries already.

Even if it doesn’t, the other variety of inflation – asset price inflation, and especially inflation of home prices – already is rampant. As NZ’s response has shown, central banks can be drawn into the effort to temper outrageous home prices. That, too, requires central banks to rethink their free money policies.

And if they do? We had a glimpse last week. The US Treasury Secretary, Janet Yellen, made a statement of the obvious when she said that “it may be that interest rates will have to rise somewhat to make sure that our economy doesn’t overheat”. Any increases would be “very modest”, she said.

Investors shuddered, shares in America’s technology sector lost 2 per cent of their value in a day, and Yellen issued a hasty retraction. In other words, investors are living in a fool’s paradise. Diamonds may be forever; infinite free money is not.

In 1955, US Federal Reserve chair William McChesney Martin famously stated that the job of a central bank is to “take away the punch bowl just as the party gets going”. The party is now getting under way; central banks are enjoying watching the intoxication of the markets. Tuesday drinks are on Josh Frydenberg.

Our Morning Edition newsletter is a curated guide to the most important and interesting stories, analysis and insights. Get it delivered to your inbox.