They spent a fortune on pictures of apes and cats. Do they regret it?

For years, Nate Hart admired a drawing of a cat: It was gray, with unusually large eyes, and pictured on a shattered, smouldering tablet. So last September, when the owner signalled they were willing to sell, Hart swooped in and offered a hefty sum: $US600,000 ($846,000).

The price didn’t phase him because of a special detail: The cartoon, part of collection of cat images called CryptoKitties, is a non-fungible token, or NFT. NFTs are like Internet land deeds, letting owners lay claim to digital art, music and photographs. By certifying the asset on a digital ledger, called the blockchain, NFTs have transformed online art, turning images into coveted assets that can be owned and that presumably rise in value. 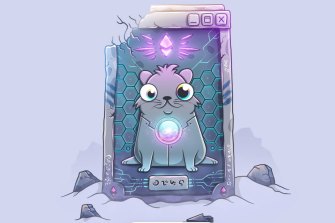 A non-fungible token called “Celestial Cyber Dimension,” created by CryptoKitties, was purchased by Nate Hart for $600,000.

Around the time of his purchase, the market for NFTs was red-hot. Celebrities minted their own, Adidas partnered with prominent collectors, and Hart was part of a throng paying thousands – and in some cases millions – to scoop up their own digital art.

People paid eye-popping numbers: $US69 million for a JPEG file by the digital artist Beeple; $US10.5 million for a pixelated image that resembled the Joker character in Batman; and $US5.4 million for a token of Edward Snowden’s face made out of court documents.

But with the crypto market cratering by $US500 billion in recent weeks, the hype over NFTs has cooled. And while Hart, who goes by NateAlex on Twitter and is a cryptocurrency investor, is unlikely to sell, he knows that if he puts it on the market today, it would probably sell low. His cat picture isn’t from a sought-after collection, he said, like the colourful apes known as the Bored Ape Yacht Club or the pixelated people known as CryptoPunks.

“It’s more wait-and-see,” he said. “If it becomes a historical artifact, then it’s going to be extremely valuable. If that doesn’t happen, then maybe it just fades away into where nobody knows or ever cares about it.”

Hart isn’t alone. A host of collectors have shelled out small fortunes in recent months for digital assets whose worth is now in limbo.

An NFT of Twitter founder Jack Dorsey’s first tweet, purchased last year by an Iranian crypto investor for $US2.9 million, was put up for auction in April, with bids topping out at $US280. A token of a pixelated man with sunglasses and hat that sold for roughly $US1 million seven months ago brought just $US138,000 on May 8. A digital token of an ape with a red hat, sleeveless T-shirt and multicolored grin – part of the popular Bored Ape Yacht Club – purchased for over $US520,000 on April 30, was sold for roughly half that price 10 days later.

Over the past three years, NFTs have generated significant excitement because proponents say they solve tricky problems. Digital images, once viewed as worthless because they could be easily copied, could now be owned and assigned monetary value. Collectible art, long seen as exclusive to high society, could now exist on decentralised, community-run networks, making them more appealing to a new generation.

But such high hopes have been punctured by bad actors targeting the industry with scams. In March, North Korean hackers stole more than $US600 million from the NFT gaming company Axie Infinity, where tokens are used to gain entry into the game and purchase add-ons. In April, the Bored Ape Yacht Club reported that hackers cracked into their Instagram account, stealing $US2.8 million worth of NFTs. 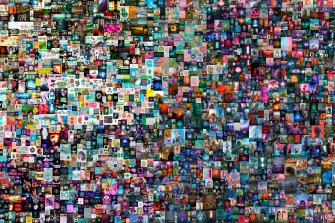 An NFT of a collage by Beeple sold at Christie’s auction house for $US69 million.

Recently, high-profile hiccups have also deflated investors. In late April, the company behind the Bored Ape Yacht Club, Yuga Labs, auctioned off millions in tokens offering land in a metaverse project they started. Its popularity caused the digital ledger it was being transacted on to nearly shut down. Trading volume also caused transaction fees to rise higher than the actual NFT price in some cases, news reports indicate.

“I think of NFTs as pure froth,” said Peter M. Garber, an economist and author of Famous First Bubbles: The Fundamentals of Early Manias. “It is more of a pump-and-dump, Wolf-of-Wall-Street operation than anything else.”

The market for NFTs blossomed in 2021, with investors spending roughly $US40 billion on tokens, up from $US106 million in 2020, data from crypto intelligence firm Chainalysis found. This year, NFTs have generated roughly $US37 billion in sales as of May, data shows.

While that puts sales on pace to surpass last year’s, a few notable companies may be driving a large part of the growth, experts noted.

Transactions since last summer have come in “fits and starts,” according to a report from Chainalysis, with two spikes probably driving most activity: The late-August release of digital tokens from the Mutant Ape Yacht Club, a different collection of images of apes with colourful disfigurations, and a period between January to early February this year were probably driven by the launch of a new NFT marketplace, LooksRare.

Since then, transactions have declined significantly, the report found, dropping from $US3.9 billion the week of Feb. 13 to $US964 million the week of March 13, with increases recently coming from the Bored Ape Yacht Club’s project to sell land in the metaverse, which garnered $US320 million in sales over two weeks ago.

Ethan McMahon, an economist for Chainalysis, said this indicates that the NFT market is starting to consolidate, with few companies holding a growing market share. NFTs generated by lesser-known companies and without celebrity appeal are beginning to lose traction. Those generated by high-end collections – known as blue chips – such as the Bored Ape Yacht Club and CryptoPunks, will probably retain value with their mass appeal, financial backing, partnerships with mainstream brands like Adidas and collaborations with celebrities.

“Things are changing,” he said. “[What] we have been seeing is consolidation in the more well-known blue chip collections of NFTs.”

In recent days, multiple crypto experts have also noted that the precipitous drop in cryptocurrency has caused the market for high-end NFTs – ones that sell for thousands or even millions – to stall. Fewer bitcoin millionaires, they said, means less spending on luxury purchases like high-priced NFTs.

“This is an especially democratic and open marketplace and definitely is affected by hype and FOMO. And people make bad decisions in every single market.”

David Hsiao, the chief executive of the crypto magazine Block Journal, said he sold off his entire NFT collection over two weeks ago for a profit of around $US165,000. That included his prized picture of an ape with a lazy stare, glasses, collared shirt and green vest – part of the Bored Ape Yacht Club collection – that he had purchased for roughly $US210,000 in October. He said the market for digital assets looks bleak in the days ahead, and he wanted to limit the damage by selling now.

Hsiao added that he expects the NFT market to suffer because of the declining price of cryptocurrency, along with other conditions like inflation, the prospect of rising interest rates, the pandemic and Russia’s war in Ukraine. After selling his NFTs, he converted his proceeds to USD Coin, a cryptocurrency pegged to the US dollar.

“If we enter a real recession, NFTs are going to be the first to go,” he said. “People aren’t going to value art, especially such a new age of digital art, when there’s a lot more problems in the world.”

Some industries, like video games and the high-end art market, find NFTs useful and likely to retain value.

Noah Davis, who leads NFT work at Christie’s, said the auction house will sell the digital assets for a long time. They plan to hold shows biannually in New York, London and Hong Kong where they will sell tokens of artwork, and they are also partnering with OpenSea, an NFT marketplace.

NFTs solve an essential problem, Davis said, in that they “give currency to ephemeral goods in an era where people are tending to favour virtual life,” but he agrees there are people that will lose lots of money by making bad investments.

“This is an especially democratic and open marketplace and definitely is affected by hype and FOMO,” he said, using the acronym for “fear of missing out.” “And people make bad decisions in every single market.”

Deepak Thapliyal, the chief executive of the cryptocurrency company Chain, who purchased a rare NFT of a pixelated alien in February for $US23.7 million, isn’t afraid. “My decision to purchase a rare Alien Crypto Punk remains the same as it is today,” he said in a statement to The Washington Post. “It is a rare piece of digital art which will have a lifetime of value to the beholder.”

Meanwhile, Frank Chaparro, an NFT collector who works for the crypto news firm The Block, said he has paid more than $US20,000 for his collection of NFT’s, which includes tokens like Froyo Kittens, which are images of cats in bowls.

Nowadays, they probably have very little value, he said. But Chaparro added that he isn’t worried because what drove him to purchase these NFTs wasn’t a desire to make money, but an attraction to the characteristics of the image and the community they created.

“Does it hurt? Of course,” Chaparro said. “You want what you have to go up, but think about all the things you enjoy having that really don’t have value but they say something about yourself.”