UK green industrial revolution plan: what does it mean for cars and homes?

Boris Johnson’s green industrial revolution proposals have been praised by some environmental groups but critics are warning that electric vehicles are too pricey, there’s little charging infrastructure and households will receive £10,000 bills to replace gas boilers with heat pumps. As Britain transitions to a cleaner low-carbon future, what do the plans really mean for your car and home?

What are the new rules for vehicles?

There will be a ban on sales of internal combustion engine (ICE) cars and vans by 2030, 10 years ahead of the previous schedule. The sale of some hybrid cars and vans will continue until 2035.

Does that mean I will have to get rid of my old car?

So what’s to stop me driving around in my old and polluting car?

There are numerous financial obstacles that will deter drivers of petrol and diesel vehicles.

On 25 October next year, London’s ultra low emission zone (Ulez) is being expanded to include most of the capital. Anyone driving a petrol car that does not meet Euro 4 standards – typically any car sold before 2006 – will have to pay the daily £12.50 charge. Diesel cars that do not meet the Euro 6 standard – which is most cars bought before September 2015 – will also have to pay. Clean air zones are also planned (though temporarily delayed) for Birmingham and Leeds, with other cities expected to follow soon. Taxes such as vehicle excise duty are also likely to rise to deter diesels and petrol cars.

Electric cars are so expensive. Will I ever be able to afford a new car again?

But these are list prices. About 70% of new cars are sold under leasing deals called personal contract plans (PCPs). The price gap between conventional and electric all but disappears on PCPs. For example, the cheapest Nissan Leaf on a PCP is £222 a month at dealers Lingscars.com, compared with £237 for a Ford Focus and £239 for a Golf.

Running costs for EVs (no more £75 petrol station fill-ups) are also much cheaper.

For cash buyers there is a £3,000 government grant towards any plug-in car that sells for less than £50,000. Johnson said in this package of announcements that there will be a further £582m made available in grants for those buying zero or ultra-low emission vehicles but full details are not yet available.

I live in a flat/terraced house. Where will I charge my car?

The government is promising £1.3bn under this announcement “to accelerate the rollout of charge points for electric vehicles in homes, streets and on motorways across England”. Almost everyone agrees that installing the new infrastructure needed for 2030 onwards will be a major challenge. The Society of Motor Manufacturers and Traders estimates Britain will need 2.8m roadside public charge points at a total cost of £1.7bn – as well as 8.3m private residential charge points and 7,000 chargers on motorways.

Dundee is the city in the UK with the most advanced charging capacity for EVs, but council officials say that “even here there’s a long, long way to go. It’s a big financial and technical challenge”.

But there is an extraordinary amount of innovation in charging going on. Maybe what will emerge is a hybrid of slow-ish lamppost charge points near your home, drive-over charging mats and fast-charge bays that will gradually replace petrol stations. 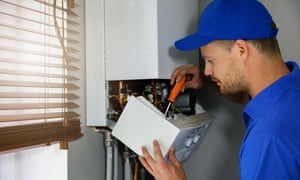 Will I have to replace my old gas boiler?

No, but you’ll be incentivised to install a heat pump when your boiler is past its best. Heat pumps are electrical devices that work like a fridge in reverse, sucking warmth out of the air or the ground without emitting gases.

The government has set a target to install 600,000 heat pumps every year by 2028 – compared with only 25,000 installed last year, in a country where 1.5m gas boilers are installed or replaced every year. Most of the change will be in new-build homes; the government has brought forward to 2023 its rules banning gas boilers in new homes, originally planned for 2025.

Flat dwellers will have to rely on communal heating systems as a better solution than individual gas boilers.

How much will I have to pay?

Radiators may also not get as hot as they do with a gas boiler, with the pumps working better with underfloor heating systems. But once installed, advocates say that in a properly insulated home they should knock a few hundred pounds off annual heating bills.

Can I get a grant for these new pumps?

Yes. Under the government’s Green Homes Grant, homeowners and landlords can apply for a grant of up to £5,000. Under the new announcements, the government has added £1bn to the existing £2bn available under the deal. But Pedro Guertler of climate thinktank E3G said: “Demand is far outstripping supply and the grants need to be put on a longer term footing.”

Related posts:
Hot News
Rising Attacks on Nigerian Farmers Hit Nation’s Food Reserves
Subramanian Swamy asks for CBI enquiry into RBI’s functioning
Wisconsin Judge Scoffs at Ex-Trump Lawyer’s Bid for Quick Ruling
How to convert HEIC files to JPG on a Mac computer, so you can upload photos to websites in a supported format
Surveillance Tape Of Vote Counting Breeding False Fraud Claims In Georgia
The Trump administration won't extend TikTok's deadline to sell off its US assets
How China's Ant Group built a $17 trillion payments machine
Recent Posts
This website uses cookies to improve your user experience and to provide you with advertisements that are relevant to your interests. By continuing to browse the site you are agreeing to our use of cookies.Ok