If workers at an Amazon.com facility in Bessemer, Ala., vote to unionize, it would boost the number of workers who have opted to join a union in a state that has membership rates below the U.S. average.

But the vote, the counting of which began March 30, is also being closely watched for other reasons — among them Amazon's position as the second-largest U.S. employer, and the prospect that a "yes" vote would buck a general trend toward dwindling private-sector union membership rates seen since the '60s.

Unionization has fallen across a range of industries over the past two decades.

Amazon, which has operations in all 50 states, has roughly 950,000 employees in the U.S., none currently unionized. The company is the second-biggest U.S. employer after Walmart Inc., which it is expected to overtake in the next few years. 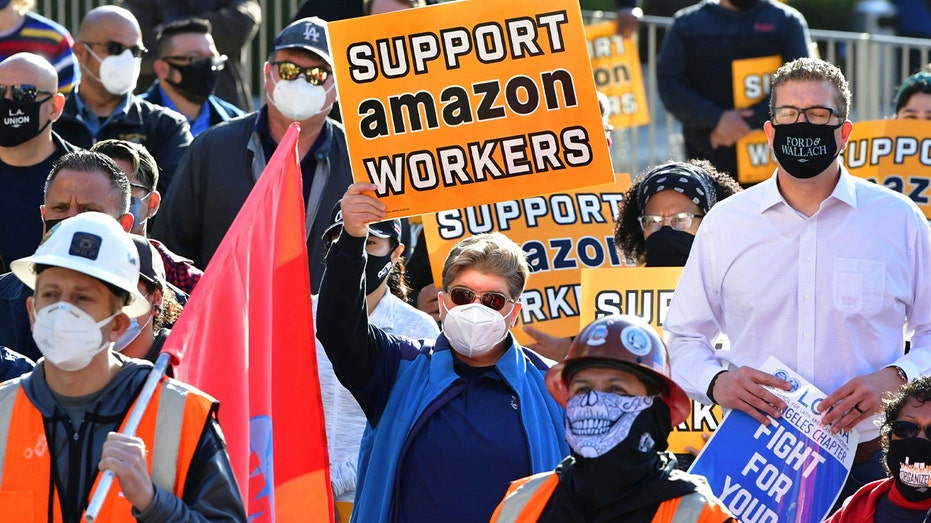 Union leaders are joined by community group representatives, elected officials and social activists for a rally in support of unionization efforts by Amazon workers in the state of Alabama on March 21, 2021 in Los Angeles, California. –  (Frederic J. Brown/ AFP via Getty Images)

Amazon says it has created more than 9,000 jobs in Alabama, where it has two delivery stations and five Whole Foods Market supermarkets in addition to its fulfillment and sorting center in Bessemer.

Alabama's unionization rate, currently below 10%, is lower than in the U.S. broadly. But the state's trend has followed a similar general downward line in recent decades.

There are 5,805 Amazon workers in Bessemer. If they were all to unionize, they would be represented by the Retail, Wholesale and Department Store Union, which had 18,000 members in the state as of 2020; the new workers would represent an increase of about 32%. Alabama is a right-to-work state, so workers wouldn't be required to join the union.

The union's estimates indicate that most of the workers at the Bessemer site are Black; nationally, about 27% of Amazon's employees are Black. While unionization rates have fallen across racial groups in the U.S. since 2000, Black workers are most likely to be represented by a union, and organizers at the Amazon warehouse have raised themes of racial empowerment during their campaign.

Meanwhile, public support for labor unions in the U.S. has risen in recent years. Last year, it reached its highest point since 2003, according to Gallup data, rising from a low point seen during the 2008-09 financial crisis.