The powerful banking regulator has urged banks and insurance companies to "seriously consider" suspending their decisions on dividend payments until there is more certainty about the economic toll inflicted by coronavirus.

In a rare intervention, the chairman of the Australian Prudential Regulation Authority (APRA) Wayne Byres on Tuesday wrote to boards, calling for restraint in dividends, buybacks and cash bonuses for executives.

Unlike regulators in the United Kingdom and New Zealand, Mr Byres did not explicitly tell boards of banks and insurers to freeze their dividend payments. However, he wrote that if they do pay a dividend, it must first be cleared by the regulator and it must be at a level that is "materially reduced." 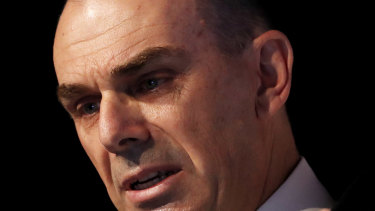 Mr Byres said authorised deposit-taking institutions (ADIs) needed to make judgments about their capital that were forward-looking, and "in the current environment of significant uncertainty in the outlook, this can be very challenging".

"During this period, APRA expects that ADIs and insurers will seriously consider deferring
decisions on the appropriate level of dividends until the outlook is clearer," Mr Byres wrote.

"However, where a board is confident that they are able to approve a dividend before this, on the basis of robust stress-testing results that have been discussed with APRA, this should nevertheless be at a materially reduced level."

Evans and Partners analyst Matthew Wilson, who has been calling for banks to suspend dividends during the crisis, said: "APRA clearly does not want ADIs and insurers to pay dividends."

Mr Byres said banks had a "critical" role in supporting the economy during the crisis, and APRA had temporarily relaxed some capital requirements "with this support very much in mind".

Against that backdrop, he said APRA expected regulated institutions to "limit discretionary capital distributions" in coming months, which should include "prudent reductions in dividends". Instead of returning capital to shareholders, APRA wants the financial sector to use their capital for activities such as lending and providing insurance.

The big four banks — Commonwealth Bank, ANZ Bank, National Australia Bank and Westpac — are among the biggest dividend payers on the Australian sharemarket, and the market has in recent weeks priced in significant cuts.

In the short term Mr Byres' letter is likely to put pressure on ANZ Bank, National Australia Bank and Westpac, which ruled off their first half last week and are due to hand down results later this month and in May.

New Westpac chief executive Peter King last week said the bank would face a “fine balance” when setting its dividend. ANZ chief executive Shayne Elliott last week told The Sydney Morning Herald and The Age he could understand why some overseas regulators had declared a "time-out" for dividends, though he did not know if this would happen in Australia.

Commonwealth Bank, which reports on a different financial calendar, last week paid $3.5 billion in dividends to shareholders for the first half, and will not need to make a decision on its dividend until its full-year results, to be delivered in August.