Watching State of Origin last Sunday night, it was hard to miss the cryptocurrency advertising. Just as the AFL and other sports have lucrative sponsorships from crypto firms, the NRL has a partnership with crypto exchange Swyftfx, which had its brand plastered across the grass.

It’s easy to see some similarities between high-risk cryptocurrency trading and sports betting – another big source of sponsorship money in professional sport. It’s also easy to see why consumer groups are worried about mass market promotion of highly speculative trading. 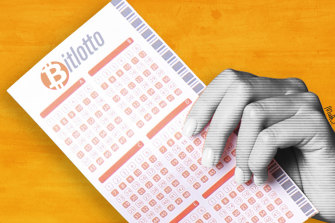 Some consumer groups argue cryptocurrency trading is as risky as gambling.Credit:Matt Davidson

The Consumer Action Law Centre, for example, says crypto exchanges should be subject to restrictions on advertising, like bookmakers are. Sounds like a fair point to me.

Yet this is only one of the many curly questions policymakers are confronting as they try to figure out how on earth to regulate cryptocurrencies.

It’s been a wild year for crypto investors, with Bitcoin prices plunging 58 per cent this year to about $US20,000. At the same time, governments everywhere are grappling with how to fit these privately-issued digital assets into some kind of regulatory framework.

The federal Treasury has been consulting on the topic recently, and the process has raised some interesting questions. For example, should regulators treat cryptocurrencies like other financial products, such as shares?

That’s the position that consumer group Choice takes in its submission to Treasury, and many in the industry are pushing for something along these lines.

But one of Australia’s leading financial experts, Emeritus Professor of Finance at University of Melbourne, Kevin Davis, worries that declaring all cryptos as financial products could backfire.

Davis, a member of the 2014 Financial System Inquiry panel, says in his submission that buying a cryptocurrency such as Bitcoin is “primarily (if not exclusively) a form of gambling/speculation”.

He says when you’re buying Bitcoin, the chances are you’re doing it not to make a payment but because you believe someone will be willing to pay you more for the Bitcoin in the future. Davis concedes that’s different from other forms of gambling, where the outcome of a horse race or a sporting match determines the gain or loss. But he sees it as gambling all the same, and likens the digital currency exchange that allowed you to buy Bitcoin to a newsagent selling lottery tickets.

“These things are highly speculative. Where do you rule the line?”

Why is the distinction important? Well, he thinks there’s a risk that designating Bitcoin a “financial product” could make consumers think crypto products are safer, and more useful, than they actually are.

Instead, Davis says only cryptos that are clearly acting like financial products should be regulated as such. The stand-out example is stablecoins, which are crypto assets pegged to other assets in an attempt to stabilise their value. While some stablecoins have proven anything but stable lately, these products can look a lot like bank deposits, so there’s clearly a case for regulating them.

“They should think very carefully about what bits of [the crypto sector] are treated as a financial product, and what bits are just pure gambling,” Davis says.

Davis is clearly a crypto sceptic. But he is not alone in highlighting the extremely speculative nature of cryptos, and the implications this might have for how we regulate them.

The Bank for International Settlements last week published research suggesting retail investors may not fully realise the risks of crypto investing, pointing to evidence that new investors in crypto were “chasing past price increases”. Its modelling found that for every 10 per cent increase in the Bitcoin price, there was a 3 per cent lift in the number of crypto app users. 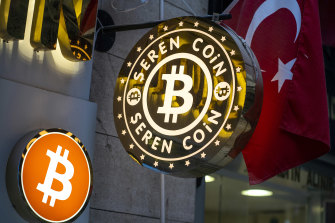 Bitcoin prices have plunged by around 60 per cent this year.Credit:Bloomberg

It said the biggest group of crypto app users were men aged under 35 – a group known for risk-taking, who could be motivated by a “fear of missing out”.

How far should regulators go in trying to protect these traders from risks?

People should be free to invest in risky assets if they’d like to, but the BIS said there needs to be “adequate” disclosure of the risks, and regulation of the advertising claims crypto firms make.

In Australia, regulators have also started requiring financial firms to show their products are “likely to be consistent with consumers’ objectives, financial situation and needs”. If cryptos were regulated as financial products, they should meet this hurdle too.

Someone with plenty of expertise in both digital finance and regulation is Greg Medcraft, the former chairman of the Australian Securities and Investments Commission, who also led the OECD’s financial services directorate, where digital finance was a key priority.

Medcraft does not go as far as saying crypto trading is outright gambling, pointing out there are plenty of other high-risk financial products. “These things are highly speculative. Where do you rule the line?” he told me this week.

Rather, he says cryptos have become “too big to ignore” and regulating them is a way to provide the same sorts of consumer protections that apply to risky financial products. While Medcraft was leading ASIC, for example, the regulator banned prime-time advertising of certain high-risk derivatives known as contracts for difference.

Whatever the regulators ultimately decide, the extreme volatility of cryptocurrencies puts traditional financial institutions in an interesting position.

While most Australian banks aren’t ready for the risks of facilitating crypto trading, Commonwealth Bank made a surprise announcement last November that it would launch a trial allowing customers to trade crypto assets through its app.

CBA’s crypto trading foray has been paused lately as it deals with regulators, but the bank has maintained it intends to continue with the pilot. But if or when the product does ultimately launch, it’s expected the bank will be careful in which customers it allows to access crypto trading via its app.

The falls in Bitcoin and other cryptocurrency prices have been brutal, and there are plenty of tricky regulatory questions hanging over the crypto sector.

It will be interesting to see how the country’s biggest bank balances all this against the desire of many customers to take a punt on crypto assets.

Ross Gittins is on leave.