CBA posts $2.4b profit on back of loan growth

Commonwealth Bank notched up profits of about $2.4 billion in the three months to March, which was flat compared with previous quarters, as loan growth helped the bank offset a squeeze on its profit margins.

In a trading update on Thursday, CBA said unaudited cash earnings in the three months to March were in line with the quarterly average for the December half. 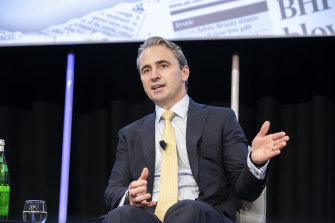 CBA chief executive Matt Comyn said the bank had executed its strategy of focusing on its core retail and business banking businesses in the quarter, and pointed to the growth across its portfolio.Credit:Louie Douvis

While CBA’s operating income from charging interest and fees slipped 1 per cent, the lender’s operating expenses fell by a larger 2 per cent, and the bank also reported solid growth in loans and deposits.

Chief executive Matt Comyn said the bank had executed its strategy of focusing on its core retail and business banking businesses in the quarter, and pointed to the growth across its portfolio.

“Looking ahead, we are well positioned to support business investment to build Australia’s future economy. Through disciplined execution of our strategic agenda, we will continue to deliver for our customers, communities and shareholders as we build tomorrow’s bank today.”

Quarterly reports have limited detail, but markets were expecting a quarterly result of about $2.1 billion, according to previous note from investment house Jarden.

While the trading update did not provide complete financial results, CBA said it had continued to benefit from very low numbers of bad debts. Troublesome and impaired loans fell in the quarter from 0.53 per cent of its total committed exposure to 0.51 per cent, and home loan arrears remained low. The bank said the low levels of customer stress reflected strong economic conditions and low interest rates.

CBA said its net interest margins – which compare funding costs with what it charges for loans – had been lower in the quarter, without providing a figure. It said stiff competition in mortgages continued to affect its margin.

Common equity tier one capital fell 9 basis points to 11.1 per cent of risk weighted assets, reflecting the impact of $3 billion in dividend payouts.

The earnings update from CBA comes after Westpac, National Australia Bank and ANZ have delivered half-yearly results this month, with all banks saying customers could withstand higher interest rates.