Commonwealth Bank-owned Aussie Home Loans is spending up to $20 million to overhaul its technology systems to deal with the complexity of getting a mortgage, in a sign of the pressure on the industry to improve back-office processes.

Chief executive James Symond conceded that when it came to technology, Aussie had been “a bit of a laggard in the last few years” but it was investing in the new systems to save customers and brokers time when dealing with banks’ checking of customers and documentation. 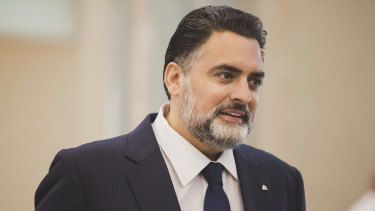 For example, the technology revamp will include electronic signatures of key loan documents as well as greater automation in the collection of customers' living expenses – an issue that has held up loan approvals in some banks.

"By the end of this calendar year all of our brokers will have world-class technology in their hands to interact with their customers," Mr Symond said.

The adequacy of banks’ systems for processing loans – and the power of mortgage brokers – have been thrown into sharp relief by recent expansion in the market share held by CBA and Macquarie in mortgages. Both CBA and Macquarie credit their recent growth to their faster loan approval times, which are crucial for brokers in deciding which banks to recommend.

Regulators are also demanding higher standards, and Mr Symond said Aussie's technology upgrade, which he said would cost between $10 million and $20 million, would allow brokers to be more effective and "more compliant than ever before".

Although banks last year lowered the minimum rates they use to assess borrowers, Mr Symond said the bar for getting a loan remained high. "It's much tougher today to get a loan than I've ever seen it before. The bar is just being set a lot higher. It's a new normal," he said.

Mr Symond made the comments in an interview on Aussie's business plans for the year after he has endured major health problems in the past two years, including battling multiple myeloma, a type of bone marrow cancer, and a heart attack in late 2017. "I've spent the last two years getting myself back," he said.

As well as the largest technology investment in its 28-year history, Mr Symond said Aussie would be looking to offer new shopfronts, and it would this year start to offer a wider range of products connected to home-buying. "We've done a very strong job on focusing on home loans for a long time. We are looking forward for ways in which to leverage," he said.

The broker has a loan book of about $70 billion, and Mr Symond said it had a "very strong" last six months though its financial results have not been published by CBA, which is looking to sell Aussie.

Mr Symond did not comment on CBA's sale plans but said the business could be broken off cleanly because it had been run as a standalone business, with no shared services with CBA or commission arrangements. "CBA don't even have anyone on the board at the moment. They've been very smart and left us alone," he said.

Mortgage brokers are also preparing for a new "best interest duty", after legislation that passed through federal parliament this month, as recommended by the banking royal commission.