The big four banks will not appear before the Senate inquiry into the effectiveness of the country’s anti-money laundering regime, despite being individually invited to discuss the level of investment needed to avoid systemic breaches of laws to prevent financial crime.

Commonwealth Bank, Westpac, ANZ Bank and the National Australia Bank are responsible for reporting the bulk of suspected criminal activity passing through Australia’s financial system and were each invited by the legal and constitutional affairs committee to participate in public hearings starting Tuesday. 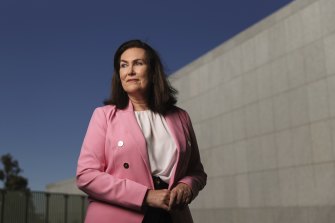 Labor senator Deb O’Neill says it is ‘disappointing’ the major banks will not appear before the inquiry into Australia’s anti-money laundering regime. Credit:Alex Ellinghausen

The Senate approved a motion by Labor Senator Deborah O’Neill in June to launch a formal inquiry into the effectiveness of laws, regulators and companies tasked with preventing financial crime. The committee has since called on a range of law enforcement, academic and industry participants to participate in two days of public hearings.

The banks have declined individual invitations to appear before the committee and will instead be represented by the Australian Banking Association (ABA), a lobby group representing 21 Australian banks. CBA and ANZ declined to comment on the non-attendance. A spokesman for NAB said executives were unable to attend because the hearings coincided with NAB’s full-year results, scheduled for Tuesday, but added the bank is “happy to engage” with the inquiry at another time.

A Westpac spokesman said: “Given it is a wider industry issue, the ABA is representing Westpac and other banks at this inquiry.”

Senator O’Neill said major banks play a key role in defences against money laundering and terrorism financing and provide AUSTRAC with much of its intelligence.

“It is disappointing that Australia’s major banks have chosen not to appear at a Senate inquiry into the important issue of money laundering, given their prominent role in the Australian economy and involvement in several recent high-profile money laundering scandals,” Senator O’Neill said.

The major banks detailed the level of investment needed to uplift anti-money laundering (AML) processes when appearing before the economics committee in September. “It would be helpful for the inquiry to know how these upgrades are progressing, when they will be completed, how they will continue to be upgraded and how effectively they’re currently operating to prevent criminal activity and money laundering in Australia,” Senator O’Neill said.

An ABA spokeswoman said it had consulted its members on the scope of the inquiry, which is not controlled by the government and does not specifically refer to individual bank experiences with AML laws.

“Much of the committee’s terms of reference focus on matters of AML/CTF policy and compliance with international standards, as well as matters that relate to non-financial businesses and professions and the prevention of money laundering outside the banking sector,” the spokeswoman said. “It is the role of the parliament to review policy … It is not for individual banks to have a view on these matters which is why the ABA made a submission and will give evidence on behalf of the industry.”

The inquiry is examining the impact of expanding AML laws to a broader range of professionals, including accountants and lawyers, in what is known as tranche two reforms. However, it is also probing the effectiveness of the regulator, the Australian Transaction Reports and Analysis Centre (AUSTRAC), and the extent to which the legislation could be strengthened to identify weaknesses before systemic breaches occur.

The major banks have suffered reputational crises in recent years over systemic breaches of AML laws. CBA and Westpac were fined $700 million and $1.3 billion in 2018 and 2020 respectively after AUSTRAC prosecuted poor controls that allowed criminals to clean illicit funds and pay for child exploitation material using the banks’ systems. The lawsuits sent the lenders into turmoil, caused both chief executives to resign and sent the stock prices plummeting.

In June, AUSTRAC disclosed it had escalated its investigation of NAB after identifying “serious concerns” related to systemic failures in customer identification and due diligence processes.

The Age and Sydney Morning Herald have revealed that NAB has enlisted professional services firm Accenture to assist its major internal remediation program, dubbed Project Apollo, to examine millions of customer accounts that have incorrect or outdated identification documents.

If a bank fails to correctly identify its customers, suspicious payments do not trigger alerts needed to file reports with AUSTRAC which liaises with law enforcement, allowing criminals to more easily abuse the financial system. Sources within NAB told this masthead it was common to find 20-year-old accounts with the occupation listed as ‘student’, raising risks these accounts can be hacked and sold on the black market.

The ABA made a one-page submission to the inquiry where it outlined strong support for tranche two reforms, adding the success of AML laws relies on the collaboration between public and private sectors to detect, deter and disrupt financial crime.

“In addition to the banks funding the annual operation of AUSTRAC, the current regime places banks at the forefront of detecting and disrupting serious crime that affects all Australians,” the submission states. “The alignment of the Australian regime to international standards will only enhance the ability of banks and Australian law enforcement agencies to detect, deter and disrupt financial crime.”