The chief executive of a $6 billion energy industry super fund has resigned the day after allegations of a toxic workplace and questionable spending on charity deals and corporate entertainment under his watch were made public. 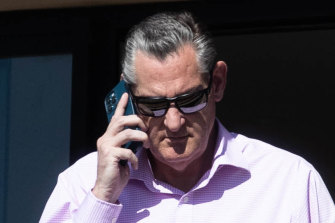 “Alex has requested that his resignation be effective immediately, which I respect and have agreed to. The fund’s chief financial officer, Mr Lance Foster, has agreed to take on the role of acting chief executive officer,” Dr Mundy said in a statement.

“We would like to acknowledge the significant contribution Mr Hutchison has made to the EISS Super and in particular ensuring members and employers’ rights were protected during the unprecedented restructuring of the electricity industry in NSW and ensuring the funding position of the defined benefit fund was returned to surplus”.

In the same statement, Mr Hutchison said: “I am looking forward to taking some time out before considering what I want to do next. The timing is right for me and it’s right for the fund.”

The Age and The Sydney Morning Herald revealed earlier this year that EISS and another fund of similar size, TWUSUPER, have been exploring a merger partnership and announced a memorandum of understanding on the deal in April.

A source familiar with TWUSUPER had said before the announcement of Mr Hutchison’s resignation that the fund fully backed the merger proposal and respected the EISS board but the deal would not go ahead if Mr Hutchison remained chief executive of the merged entity.

The Age and Sydney Morning Herald can reveal that the Australian Prudential Regulation Authority (APRA) had made enquiries with EISS over whether the fund’s extensive sponsorship deals with local football clubs and other sporting organisations were in the members’ best financial interests.

“They were asking, ‘How can you prove there has been a demonstrable return? What market research was undertaken before that deal was agreed to?” said a former employee, who spoke on the condition of anonymity.

“There is supposed to be a process that clubs follow,” said one source. “More than half of the sponsorships, Alex Hutchison specifically told the community engagement team, we’re sponsoring this club, have the agreement drawn up.”

Federal government reforms introduced this year enforce stricter tests for superannuation fund spending to be in members’ best financial interest. Since these rules came into effect, EISS has not signed any new sponsorship deals. EISS did not respond to questions about the existing deals or APRA’s enquiries on Thursday.

APRA declined to comment. However, deputy chair Helen Rowell said in May the regulator was probing the spending patterns of around 20 funds and threatened punishment for unnecessary sponsorship deals and marketing spending.

“I make no apology for supporting the professional development of our staff. We must invest in you all to ensure we continue to provide the services that our members want and the law requires,” Dr Mundy’s email, obtained by The Age and Herald, said.

“EISS Super is a fund focused on our members. We have rigorous policies and processes in place to ensure the fund is run in the best interests of members and any suggestion that this has not occurred is simply untrue.”

As well as being chair of EISS, Dr Mundy is on the state executive board of the NSW Labor Party, which was set up to improve its governance, and chairs the national ALP finance, risk and audit committee.

The Age and Sydney Morning Herald revealed on Wednesday EISS was forced to hire external solicitors WorkDynamic to probe bullying complaints against a senior manager made by the fund’s former general manager of people and culture Lisa Elias.

While WorkDynamic found a number of the allegations were unsubstantiated, five former employees, who could not be named because they feared retribution, claimed the investigation was not comprehensive. Ms Elias declined to comment.

But these allegations and others of a toxic work culture and high staff turnover were rejected by the chair.

“At EISS we work hard to provide staff with a supportive and safe workplace. Part of this is providing opportunities for us all to come together to celebrate our achievements. It is disappointing that ex-employees are making these allegations about our workplace which we think are inaccurate and not reflective of the workplace we have built together,” Dr Mundy said in the email to staff.

Dr Mundy said that no final decision had been made by the boards on the merger but “much progress has been made”. A TWUSUPER spokesman said the fund was exploring the merger because it would scale up the funds, reduce costs and give EISS members access to strong investment performance and focus.

EISS has been on the regulator’s radar since APRA launched its heatmaps initiative two years ago, which flags funds achieving less for their members’ retirement savings. EISS’ investment performance over a five-year period scored the worst possible ranking in both 2019 and 2020.

EISS has returned 17.7 per cent to members over the 12 months to July, benefiting from the post-COVID equities rally. However, the best 20 MySuper funds over the same period returned 22.3 per cent and the bottom 20 averaged 16.7 per cent, according to figures from Rainmaker Information, a financial services research firm.

Now that EISS has failed APRA’s performance test, it has to improve returns, reduce fees or face a ban from accepting new members. New regulations force the fund to send a letter to members by the end of this month informing them of the under-performance.