From the Archives, 1985: Keating opens Australia to foreign banks

Australia is to have 16 new banks from the middle of the year, a development which will mark the biggest step yet in the banking revolution. 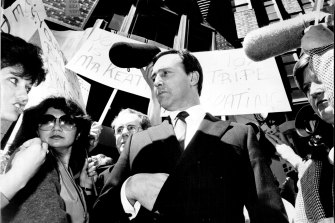 Paul Keating at the opening of the Chase Manhattan AMP Bank in Sydney, one of the winners of the banking licences.Credit:Ian Cugley

Up to eight of the banks, which represent the world’s largest, will remain fully owned overseas, although three have undertaken to offer Australian equity.

Naming the 16 winners in the banking race, the Treasurer, Mr Keating, said yesterday they represented the biggest infusion of capital and expertise ever to be injected into the financial system.

“It will lift competition and provide the Australian public with banking services equal to the best in the world,” he said.

He said the banks would give jobs to more than 8000 people, 4500 more than already employed by the successful applicants in their existing merchant banking operations. They would have a total capital of more than $1500 million, less than $100 million a bank.

The first of the new banks are expected to open around mid-year after talks with the Reserve Bank and the Treasury and the formal granting of banking authorities.

They include some of the biggest and best known banks in the world, such as Chase Manhattan and Citibank of the United States, Barclays and National Westminster of Britain, the Bank of Tokyo, and the Hong Kong and Shanghai Banking Corporation. 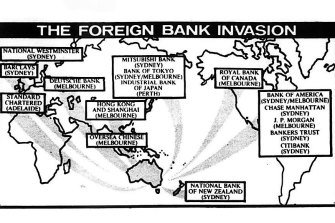 A graphic published in The Age on February 28, 1985 shows the foreign banks awarded licences in Australia, and where they will be located.Credit:The Age Archives

The decision is the culmination of 18 months of effort and argument by Mr Keating and the Prime Minister, Mr Hawke, and goes well beyond the “limited” number of foreign banks for which the ALP national conference gave approval last July.

Five of the banks will have their headquarters in Melbourne and seven will be based in Sydney.

Another two say they will have dual headquarters (Melbourne and Sydney). One will be based in Adelaide and another in Perth.

The Victorian Government’s Economic Development Corporation has been successful in winning a licence in partnership with the Hong Kong and Shanghai Banking Corporation.

The other banks with headquarters in Melbourne will be J. P. Morgan and Co of the United States; the partnership between the Royal Bank of Canada and the National Mutual Life Association; the Deutsche Bank of Germany; and the Overseas-Chinese Banking Corporation of Singapore.

The Premier, Mr Cain, said last night the decision of five foreign banks to place their headquarters in Melbourne was an outstanding endorsement of his Government’s economic policies.

Mr Cain said the entry of the foreign banks would provide a vast new range of services and benefits to all Victorians and would mean direct employment for about 2000 people.

The Sydney-based banks will be the Chase Manhattan with the AMP Society; Barclays and the National Westminster of Britain; Citibank and Bankers Trust of the US; the National Bank of New Zealand (which is 100 per cent owned by Lloyd’s of Britain); and the Mitsubishi Bank of Japan in a three-way partnership with the City Mutual Life Association and the Australian engineering and concrete group, Howard Smith Ltd.

Adelaide will be home for the three-member consortium of Britain’s Standard Chartered Bank, the South Australian State Government Insurance Commission and Advertiser Newspapers. The partnership involving the Industrial Bank of Japan, the Western Australian Development Corporation, the Town and Country WA Building Society and the State Government Insurance Office will be based in Perth.

These new entrants initially will be small fry compared with the four existing banks – the Federal Government’s Commonwealth, and the private enterprise banks Westpac, ANZ and National Australia, each of which ranks among the top 70 banks in the world and, as Mr Keating pointed out yesterday, among the five per cent in the world in terms of profitability.

When Mr Keating originally began fighting for the entry of foreign banks, he indicated that only about six licences would be issued. The 1984 Labor Party national conference agreed to a “limited number” of new licences.

Mr Keating yesterday reported the Cabinet decision to invite 16 banks into the country to the economic committee of caucus and said later that there had been no complaints about the bigger number of successful foreigners.

He stressed that the prime consideration in selecting the 16 from the original 42 applicants was competition.

He would not say which partnerships involving local groups had been defeated in the final decision by 100 per cent foreign-owned banks. Mr Keating said three of the eight fully owned foreign banks had indicated they would offer some ownership to the Australian public later.